Tigers vs Blue Jays Picks and Predictions: Can Kikuchi Be Trusted? (Spoiler: No)

The Toronto Blue Jays have been destroying opposing pitchers of late, and they'll get some help from their mound as well in pushing tonight's total. We're (naturally) fading Yusei Kikuchi against the Tigers — get your best MLB bets for tonight's matchup.

The Toronto Blue Jays' seven-game winning streak came to end last night, but they’ll look to get right back in the win column when they welcome the Detroit Tigers to town for the opener of a four-game set.

The Blue Jays are big favorites for the American League matchup thanks to their high-flying offense, but with the struggling Yusei Kikuchi making his first start since July 5, do the Tigers have value as an underdog? And maybe, more importantly, does the total stand a chance?

Find out in our free MLB betting picks and predictions for Tigers vs. Blue Jays on Thursday, July 28.

The Blue Jays opened this AL matchup as big -210 favorites but that hasn’t stopped bettors from backing them, moving the line to -235. The total hit the board at 8.5 but bettors were quick to hammer the Over with the number getting bumped up to 9.5 as of Thursday afternoon.

If you're betting on Tigers vs. Blue Jays, here are two of the best bonuses* available:

Tyler Alexander (2-3, 4.05 ERA): Alexander began the year in the Tigers' rotation, but after some early struggles, he became the team's long reliever, where he's found some success. This is the lefty’s first start since April 29.

Yusei Kikuchi (3-5, 5.12 ERA): Kikuchi will try to get his tumultuous season on track when he makes his first start since July 5. Apparently, he’s been working on his mechanics, which is needed after he’s failed to get through five innings in six of his last seven starts.

The Over is 7-0-1 in the Tigers' last eight games when facing a team with a winning record and is 22-7 in the Blue Jays' last 29 home games. Find more MLB betting trends for Tigers vs. Blue Jays

Baseball is funny sometimes. The Blue Jays were arguably the hottest team in the MLB heading into last night’s game and then two of the oldest guys in the game, Adam Wainwright and Albert Pujols, handed them a loss.

Now, the Jays will try to get back in the win column tonight against the Tigers, and while they are big favorites to do so, it’s going to be easier said than done as Yusei Kikuchi makes his return to the mound.

Kikuchi’s first season in Toronto has been a rocky one, to say the least. Kikuchi has a live fastball but isn’t using it enough it seems, because he has been getting hit hard, and often. As a result, the lefty ranks in the Bottom 1% of the MLB in average exit velocity, hard-hit percentage, barrel percentage, and expected ERA.

Now, the Tigers' offense is bad. One of the worst in baseball. But they actually have some solid numbers against lefties, ranking third in batting average and 13th in OPS when stepping into the box against southpaws.

On top of that, even though Anderson doesn’t have great numbers overall, he’s been solid since becoming the Tigers’ long reliever, allowing just three earned runs over his last 21 innings of work. And while Anderson probably won’t go much longer than three innings, he can hand the ball to a bullpen that somewhat surprisingly ranks fourth in ERA and eighth in WHIP.

The Jays' offense has been incredible, but I just don't know how you can have any confidence in backing Kikuchi at this price. The Tigers are a value as underdogs.

Early bettors were quick to jump on the Over in this matchup, and can you blame them? We already talked about how the Tigers can have success in this matchup against Kikuchi, but when you factor in the Jays’ offense, watch out.

The Jays’ bats finally got stymied by the veteran Wainwright in last night’s loss to the Cards but with the way they have been hitting, don’t expect them to stay down too long. Particularly in this matchup against the Tigers and Tyler Anderson.

While Anderson has been solid lately as a reliever, he has an 8.26 ERA as a starter this season and has a 4.85 xERA, .282 opponent xBA for the season. Now, he has to go against a Jays offense that has been arguably the best in baseball for the past two months. In fact, they lead the MLB in batting average, OPS, and wRC+ since June 1.

The number is high, but you’ve still got to lean towards the Over when you combine the Jays’ awesome offense with the unreliable pitching of Kikuchi.

I bet you can guess where we're going with our best bet today. Fade Kikuchi and take the Over 5.5 first five innings at decent plus money. Kikuchi has surrendered at least three earned runs in six of his last seven starts, none of which lasted five innings. Combine that with the Jays' offense that, on top of everything else, leads the MLB in five-inning scoring at 2.98 per contest, and this is a solid bet. 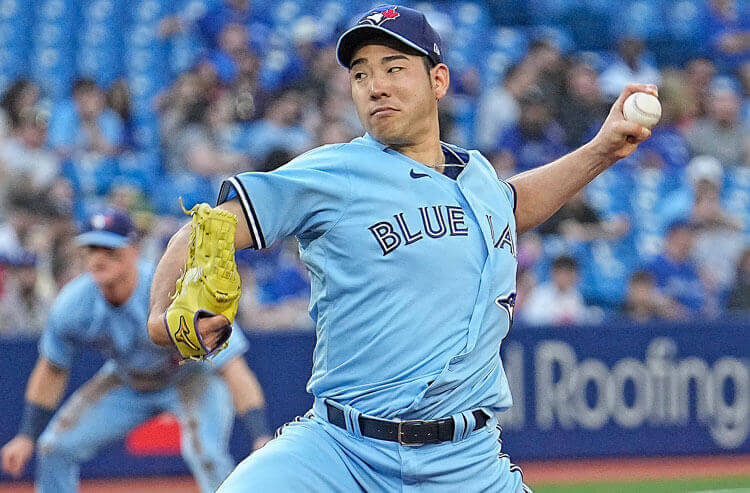 Tigers vs Blue Jays Picks and Predictions: Can Kikuchi Be Trusted? (Spoiler: No)
Provided by