Even with Shohei Ohtani on the mound for the Angels, our MLB betting picks have some qualms about backing them as -250 favorites. As such, we're targeting the value with the underdog Rangers with some help from Jonah Heim's bat.

The Los Angeles Angels return home after a six-game to Atlanta and Kansas City where they went 3-3.

Now, they host the Texas Rangers — who are 1.5 games ahead of the Angels in the division — for three games.

Shohei Ohtani takes the mound for the Angels, while Spencer Howard gets the start for Texas. Ohtani has been putting up solid numbers, while Howard has struggled.

Can the Angels take advantage of Howard and the Rangers on Thursday or will Texas take Game 1? Find out with our free MLB picks and predictions for Rangers vs. Angels.

Spencer Howard (1-2, 7.11 ERA): Howard was on the Opening Day roster but got sent down to Triple A at the end of April after three rough starts where he failed to get past the third inning. He allowed nine runs, including six home runs. He was recalled to the Rangers on July 5 and has pitched in four games. The 25-year-old righty has allowed 12 runs on 23 hits in just 18 2-3 innings.

Shohei Ohtani (9-5, 2.80 ERA): After rattling off six consecutive victories, Ohtani posted a loss in his last outing against the Atlanta Braves. Atlanta got six runs, including two homers, off of the 28-year-old right-hander. Still, Ohtani has been one of the lone bright spots for the Angels this season. However, of his five losses, two have followed a previous loss. He also has a no-decision and a loss against the Rangers this season.

The Over is 7-1-3 in the last 11 meetings between the two teams. Find more MLB betting trends for Rangers vs. Angels

Rangers vs Angels picks and predictions

The Los Angeles Angels have been spiraling down the AL West since May 24, when they were just a game behind the Houston Astros for first place in the division. Since then, the Angels have gone 15-39, including a franchise-record losing streak of 14 games.

Now, Los Angeles has an interim manager, star outfield Mike Trout on the injured list, and no realistic chance at making the playoffs. They are mired in fourth place, just 5.5 games below last-place Oakland.

They host Texas with the hope they can avoid getting closer to the division basement. They are sending ace Shohei Ohtani to the mound, who is 9-5 on the season.

The Angels are heavy -250 favorites, but should they be? Ohtani lost his last start against the A's, and in two previous situations where the right-hander lost, he also lost the next time out.

The two times Ohtani has faced the Rangers this season he has come away with a loss and a no-decision. In those two games, Ohtani has allowed eight runs on 12 hits in 9 2-3 innings.

The 28-year-old also has the extra burden of trying to pick up the slack offensively for Mike Trout, who is on the shelf with a rare type of back disorder. Trout is confident he will return, but in the meantime, Ohtani and Jared Walsh, as well as Taylor Ward will have to try and make up for Trout’s missing bat.

The Rangers lead the Angels in every offensive category, including home runs, hits, batting average, runs, and on-base percentage, and are also 4-1 in the last five meetings with L.A.

The Rangers are 13th in runs, while the Angels are 25th, but they seem to score them when Ohtani is facing them. Both times he has pitched, the Over has hit and did so easily.

In April, the Rangers won 10-5 and in May the score was 6-5. Of those 16 runs the Rangers scored, Ohtani allowed eight of them.

Texas has been hitting the Over often recently. The Rangers have hit the Over in their last four games against a starter with a WHIP less than 1.15, and are 6-1 in their last seven during the first game of a series.

The Angels haven’t been trending nearly as well on the Over, but they are 6-2 in their last eight games against right-handed starters.

Texas starter Spencer Howard might be all too willing to help the Over. Since being recalled from Triple-A on July 5, he has started four games. In those games, he has allowed two runs twice and four runs in the other two.

He has an ERA of 7.11 and 5.30 in his last four games. He told reporters after his last start he was trying to do too much. Despite the Angels’ anemic offense, they might be able get to the righty.

No one on the Rangers has had better success against Ohtani than Texas catcher Jonah Heim. He has torched Ohtani in the two games he's faced the reigning MVP.

In April, Heim hit a grand slam off Ohtani, and also singled in a run. In May, he also recorded a single and a double, scoring two runs.

Heim couldn’t explain why he has so much success against one of the better pitchers in the league.

“If I knew, then I would go up against everybody like that. I just go up there and try to be as calm as possible,” Heim said. “I know [his pitches] come in extremely hard and it's tough to see, so I just try to slow myself down and see it. If it’s somewhere in the zone, I take some good swings.”

Expect Heim to get to him again for at least one RBI. At +205, this is one of the better prop bets for this game. 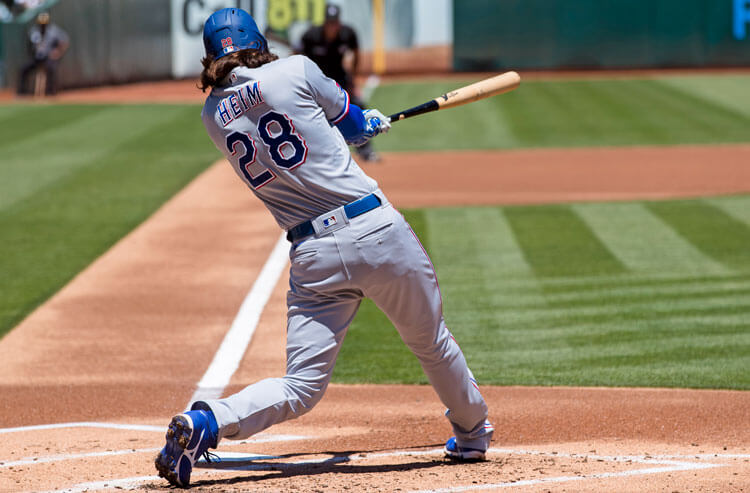 Rangers vs Angels Picks and Predictions: Fading Angels as Bloated Favorites
Provided by