Padres vs Mets Picks and Predictions: Can deGrom Deliver Another Under?

While Jacob deGrom chases the single-season ERA record, the pressing MLB betting question is whether he can shut down San Diego and keep this game Under a super-low total. Find out with our Padres vs. Mets picks.

What a way to open a series. The best player in baseball will be on the mound against a World Series betting favorite.

Yup, Jacob deGrom will try to continue his assault on the record books takes the ball for the New York Mets, who begin a three-game weekend set against the San Diego Padres at Citi Field. The Padres counter with Blake Snell, giving us a rock-bottom total of 5.5. Do we dare bet the Under?

Check out our MLB free picks and predictions for Mets vs. Padres on Friday, June 11, with first pitch scheduled for 7:10 p.m. ET.

With Jacob deGrom and his tiny ERA on the bump, the Mets landed on TwinSpires' odds board as a -161 favorite and made a stop at -167 on the way to -182, where the moneyline stands at 4:30 p.m. ET. The Padres are attracting 63 percent of tickets, while the Mets are landing 67 percent of cash. The total moved from 6 to 5.5 and back to 6, with 74 percent of tickets/71 percent of money on the Over.

Blake Snell (2-2, 4.83 ERA): It has been an inconsistent first year in San Diego for the former American League Cy Young award winner. But the lefty is limiting opponents to a .216 batting average and is coming off his best start of the season, shutting out this same Mets team on just one hit while striking out 10 over seven innings back on June 4.

Jacob deGrom (5-2, 0.62 ERA): What more can be said about deGrom that hasn’t been said already? Well, now he’s starting to get mentioned in conversations with Bob Gibson. Like, can he match Gibson’s single-season ERA record of 1.12? That’s ridiculous. His 0.62 ERA is the lowest by a pitcher in his first nine starts since ERA became a recorded stat.

The Under is 6-1-1 in deGrom’s last eight starts. Find more MLB betting trends for Padres vs. Mets.

The Padres and Mets played a four-game set in San Diego just last weekend, which the teams split. The Padres won Blake Snell’s start in that series, while the Mets obviously took deGrom’s start.

As mentioned, Snell dominated the Mets in an eventual 2-0 victory, and even though there is no denying the Padres’ lefty has electric stuff, inconsistency has plagued him all year long, particularly on the road. Snell has pitched to an almost unfathomable 9.70 ERA with a 2.11 WHIP away from Petco Park this season.

And despite the Mets' struggles at the plate this season, they still rank 14th in batting average and have scored 6.1 runs per game over their last 10 contests, while Snell is allowing opponents to hit .292 when he pitches on the road.

Then there’s deGrom. Obviously, one bad inning and he could say goodbye to breaking Gibson’s record. But we aren’t betting on that happening. The guy is as unhittable as anyone has been in this generation of baseball and he faces a Padres lineup that hasn’t been as strong as expected to this point in the season.

The Padres rank 19th in batting average and 22nd in OPS, and outside of Fernando Tatis Jr., there just isn’t any pop in this lineup. In fact, they rank 27th in home runs per game.

There is probably some value here with the Padres' odds, but it’s impossible to fade deGrom right now.

What do you do with a total of 5.5? It's a number you rarely see in nine-inning baseball games, even in this 2021 season of low totals. But that’s just how good this pitching matchup is.

While Snell has been much worse on the road this season, he is nowhere near as bad as those numbers indicate. On top of that, he's backed up by arguably the best bullpen in baseball. The Padres relievers rank first in ERA, second in WHIP, and third in opponent batting average.

But again, we come to deGrom. The guy has allowed just four runs in nine starts. He has allowed zero runs in five of his starts, including his last game against the Padres. That game also had a total of 5.5 and ended up as a 4-0 Mets victory. But it's not just run prevention. He is limiting opponents to a .128 average and is striking out a ridiculous 14.4 batters per nine innings.

It doesn’t take much for this one to go Over, but we’re betting it doesn’t. 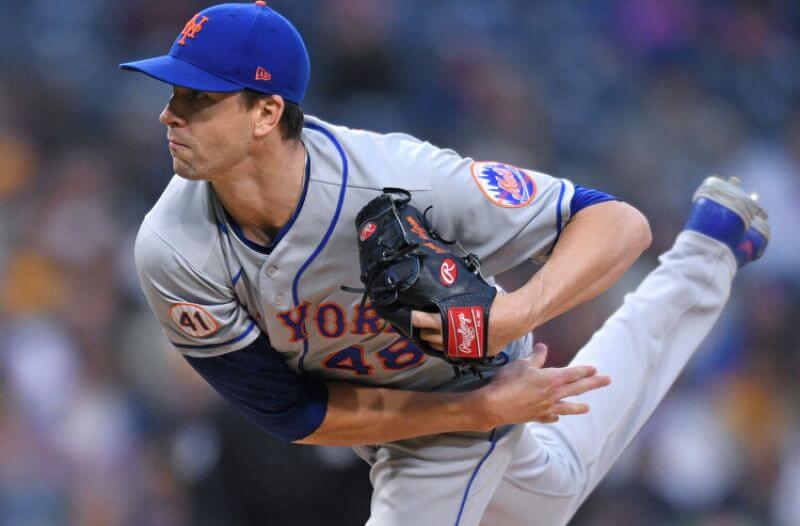 Padres vs Mets Picks and Predictions: Can deGrom Deliver Another Under?
Provided by