The Oakland Athletics’ nightmare season is only going to get more difficult Wednesday when they host MLB’s best team, the Los Angeles Dodgers. To make matters worse, they’ll be facing Trevor Bauer.

Oakland, looking to avoid consecutive sweeps, takes an 0-6 record into the series finale against the 2020 World Series-winning Dodgers, who are off to a 5-1 start. Bauer will make his second appearance with Los Angeles after flirting with a no-hitter in a dominating debut.

Here are our best free MLB picks and predictions for Dodgers vs. A’s on April 7, with first pitch scheduled for 3:37 p.m. ET in Oakland.

Trevor Bauer (1-0, 5.68 ERA): The 2020 NL Cy Young winner took a no-hitter into the seventh inning in his Dodgers debut at Coors Field, picking up right where he left off last season. Although Bauer ended up being charged with four earned runs after serving up a pair of homers, this was quite the debut for the right-hander. He struck out 10 and issued two walks and now gets to pitch in a much friendlier environment when he takes on the A's in Oakland. With how much the Athletics have been struggling, don't be surprised if Bauer spins another gem.

Jesus Luzardo (0-1, 9.00 ERA): Luzardo is one of the young arms the A's will be counting on to compete for another AL West title. He flashed what he does best in his season debut, but was ultimately done in by the long ball in a loss to the Astros. The 23-year-old punched out eight and comes with big strikeout potential, but allowed five runs over five innings. Luzardo, a third-round pick in the 2016 draft, moved through the A's system fast despite a limited body of work in the minors thanks to his ability to miss bats and pound the zone. For a pitcher who does that and doesn't have a track record of allowing many homers, he has tremendous upside throwing in Oakland's pitcher's park, but the Dodgers' relentless offense obviously poses a major challenge.

Athletics are 0-6 SU and have lost by four-plus runs in each game. Find more MLB betting trends for Dodgers vs. A's.

Oakland couldn’t have asked for a worse start. Projected to win 85-plus games, the A’s’ World Series odds have gone from +1,400 on Opening Day to +3,000 in less than a week. The franchise is off to its worst start in 105 years and already sports a -37 run differential.

Star third baseman Matt Chapman, who is coming off season-ending hip surgery, has two hits in 19 at-bats. The A’s have been held to three runs or fewer in five of six games, scoring only one in half of them. They have lost by at least four runs in every contest and surrendered eight-plus runs in five straight games to start the year. It’s really ugly.

The Dodgers, on the other hand, have been the Dodgers. They lost their first game of the season and have reeled off five in a row since. They entered the season as favorites to repeat as World Series champs and have looked the part so far. Los Angeles is stacked everywhere and gets to deploy its new shiny toy, Bauer, a night after Clayton Kershaw was in vintage form.

The A’s are bound to snap their winless streak soon and Luzardo can certainly shut down a good lineup. But for an offense that can’t score, against a big arm in a pitcher-friendly park, it’s a stretch to think Oakland will finally get in the win column today.

Runs will be hard to come by versus Bauer – who led the National League with a 1.73 ERA last season – so we like the better value play of going with the Dodgers on the runline to avoid getting them at -160 odds, or worse, on the moneyline.

If Bauer can strike out 10 and take a shutout into the seventh inning at Coors Field, just imagine what he’s going to do in Oakland. While the obvious result doesn’t always play out like that in baseball, this is about as good a matchup as Los Angeles’ new ace could ask for.

He’ll be pitching in a low-scoring environment against the American League’s worst offense. Oakland is averaging 2.16 runs per game and has the third-worst on-base percentage in baseball.

Oakland went Over in its first five games, thanks to getting rocked in all of them, but Luzardo will give his club a chance to come Under for the second time. He’s at nearly 10 strikeouts per nine innings for his brief career and has a 3.04 ERA in 10 home appearances. His numbers are significantly better at home, which isn’t surprising considering how well the park plays up for pitchers.

Oakland might get lucky and catch a Dodger regular or two resting on the day-after-night-game series finale, which would make Luzardo’s assignment a tad more favorable against a Los Angeles lineup that leads the majors in batting average (.327), OBP (.420), and weighted runs created.

We'll bank on the two starters keeping runs off the board, allowing this game to sneak Under. 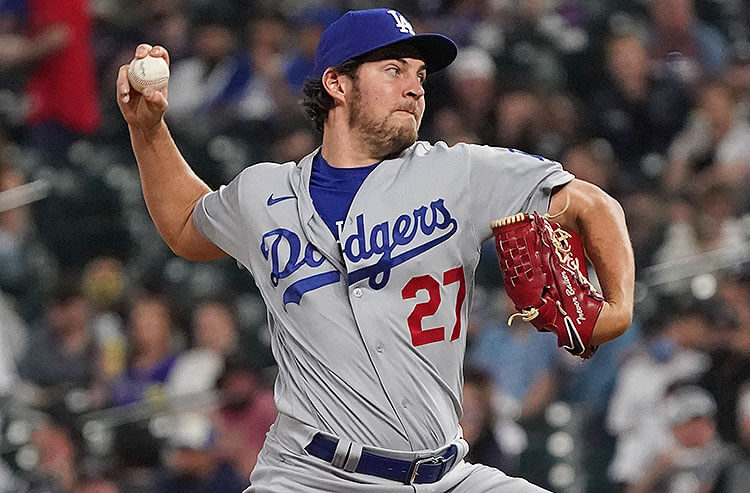 Dodgers vs A's Picks: Bauer Gets MLB's Worst in Pitcher's Paradise
Provided by