Boston may be without a pure starter on the mound tonight, but the margin in Brandon Woodruff isn't as great as perception seems to think. We're backing the BoSox bats to do their thing at hitter-friendly Fenway with our MLB betting picks.

The Boston Red Sox haven’t looked great following the All-Star break but should they be +145 home underdogs versus the Milwaukee Brewers tonight at Fenway?

I don’t see this pitching matchup as one-sided as the books believe and some indicators tell me that this will not be an easy matchup for Brandon Woodruff. Find out where my best bet lies in my free MLB picks and predictions for Brewers vs. Red Sox.

The Red Sox opened as +135 underdogs but have grown to +145 since Boston announced they will use an opener and then let Brayan Bello get the bulk of the work. The total opened at 9. These two clubs have not met since 2017.

A) Brandon Woodruff Over 7.5 strikeouts & Willy Adames to record a hit BOOSTED to +220 at Caesars! Claim Now

Brandon Woodruff (8-3, 3.73 ERA): After getting some Cy Young nods a season ago, 2022 hasn’t gone the same for the Milwaukee right-hander. His barrel percentage has jumped from 5.5% to 7.7% this season, with the league average sitting at 6.7% for comparison. He’s faced plenty of weak offenses over the season and, of his 14 starts, just four of those opponents are currently above .500. Over his eight starts on the road, he owns a rough 5.26 ERA.

Austin Davis (1-1, 5.50 ERA): Austin Davis will serve as the opener today with Brayan Bello eating the middle innings. This will be Davis’ third start, and even though he has a 4.50 ERA, this is a pitcher who owned a sub-3.00 ERA just four appearances ago but two bad relief showings spiked his numbers. Bello is the No. 39 prospect in baseball and touches the high-90s with his sinker. He’s made three starts this season, and has seen the Rays and Blue Jays to unflattering results, but the talent is legit.

The Over is 6-0 in the Brewers’ last six games vs. a right-handed starter. Find more MLB betting trends for Brewers vs. Red Sox

The Red Sox closed as +120 home dogs yesterday versus a very good Cleveland team and Triston McKenzie, in a game they won 4-3 thanks to some solid pitching and better defense. The stock on the Red Sox is certainly low since they’ve come out of the All-Star break with a 2-5 SU record and have given up seven or more runs in four of those games.

Red Sox announce Austin Davis will start tonight’s game against the Brewers with Brayan Bello available out of the bullpen. Bello had been scheduled to start.

Despite the lack of faith from the books, the Brewers could be overvalued here as Brandon Woodruff is not the same pitcher he was a season ago as a Cy Young candidate.

His struggles on the road are legit this season and today will be his toughest opponent since he returned from injury in June. The best offense he's seen of late has been the Giants, but Woodruff had the advantage of pitching in Oracle Park, which is one of the best pitching parks in baseball.

Today, he’ll see Fenway which is playing as the best hitter-friendly park on today's slate that includes Coors Field. Woodruff owned a 4.74 ERA heading into July and faced the Pirates (twice), Giants, and Rockies, which has brought his number down to 3.73.

Trusting Austin Davis and Brayan Bello might be worrisome for bettors, but those risks are priced into today’s line. What might not be priced in, though, is Woodcroft’s cupcake schedule to date and a setting that's going to make it difficult on the starter.

Tonight will mark the eighth straight game at Fenway Park, and some crooked numbers have been put up in the hitter-friendly barn of late. Of the eight games, the total has been 9 or lower just twice. Tonight's total isn’t at 9.5 only because of the perception that Woodruff is going to shut down this Boston offense.

Yes, the Red Sox will be without Rafael Devers, but missing a left-handed bat versus Woodruff isn’t the worst thing in the world, as he's a reverse-splits pitcher.

The Red Sox are getting creative and using an opener, Davis, to give Bello a different look after he has been hit hard in his first three MLB starts. Tonight’s Boston pitchers will face a Milwaukee offense that sits fourth in total home runs this season and will be aided by 8 mph winds blowing out to center, but more importantly 90-degree temperatures.

In the three games that Bello started, the combined scores were 12, 15, and eight with the opposing team scoring eight, 10, and seven runs.

The books are expecting the Brewers to put up some numbers today, but I don’t think they’ve priced in how well the Boston offense could touch Woodruff.

While most books are at 6.5 for Woodruff’s strikeout prop, FanDuel is hanging 7.5 paying -154 to the Under. I love the Under 7.5 but would also play the Under 6.5 at plus money.

Fenway is playing more hitter-friendly than Coors Field today thanks to winds blowing out to center, temperatures in the 90s, and some humidity. Woodruff has posted back-to-back season-highs in pitches (100 and 112) and throwing 100-plus pitches in three straight starts is something he has done just once over his six-year career. THE BAT has him projected for 92 pitches.

If Boston goes with a heavy right-handed hitting lineup, it could be even better for the punchout market. Woodruff’s splits favor right-handed hitters substantially as he has a K% of just 21.7% to RHH compared to 40.7% to lefties.

Boston is an average team in K% and Woodruff is not the pitcher he was last season when he was a Cy Young candidate. He owns an 11.4 K/9 on the season but has topped 7.5 strikeouts in just six of his 14 starts this season. He’s also feasted on poor lineups and THE BAT projects him for 5.94 punchouts. 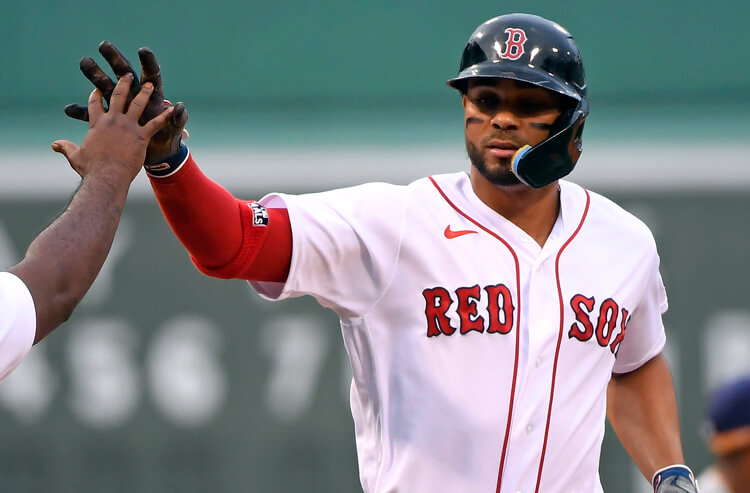