Don’t be distracted by the upcoming trade deadline, there is a ton of value in today’s MLB player prop markets and I’m digging into every game and doing the heavy lifting so you don’t have to.

With today's MLB player prop picks, we’re backing the bat of one of the biggest names in the trade market, getting a great strikeout total on a pitcher with reverse splits, and fading a reigning Cy Young winner.

Juan Soto might not have many games left in a Washington uniform but he’ll at least get to see Miles Mikolas and the Cardinals today.

Soto has seen Mikolas eight times over his career and is 3-for-8 with a home run and two RBI. He’s coming off a series where he had to face the elite pitching of the Dodgers, and as he's riding a 4-for-25 stretch at the dish, the markets have cooled on him slightly.

National Park is a neutral-hitting park but conditions are slightly favorable for the batters tonight. Soto also is in F-you mode to the Nationals, as their relationship is souring by the day.

The Juan Soto-Nationals situation is getting more and more wild by the day pic.twitter.com/dffCkkiC6E

This is just a solid price for a player who is struggling over a small seven-game stretch but is still hitting .305 with a .600 slugging across his last 30 games. Even with the recent rough patch, he’s knocked in 11 batters over his last 15 games.

Mikolas has been giving up plenty of home runs of late (five over his last 25-plus innings) and if there's anyone in this Washington lineup that can take advantage of this trend, it’s Soto.

Brandon Woodruff will take his trade to the fields of Fenway today and FanDuel is giving us a strikeout prop of 7.5 while all other books are at 6.5. I love the Under here and if the 7.5 is gone at the time of reading this, I’d take the Under 6.5 at plus money as well.

Fenway is playing more hitter-friendly than Coors Field today thanks to winds blowing out to center, temperatures in the 90s, and some humidity. Woodruff has posted back-to-back season-highs in pitches (100 and 112) and throwing 100-plus pitches in three straight starts is something he's done just once over his six-year career. THE BAT has him projected for 92 pitches today.

Rafael Devers is still out of the lineup, but missing a left-handed bat might not be a bad thing for Boston, as Woodruff’s splits favor right-handed hitters substantially. He has a K/9 of just 21.7% to RHH compared to 40.7% to LHH. The Red Sox typically role out four left-handed bats vs. right-handed pitching (Jared Duran, Alex Verdugo, Franchy Cordero, and Jackie Bradley Jr.) but if the Red Sox want to go right-handed-heavy they have plenty of options with four righties on the bench.

Boston is an average team in K% and Woodruff is not the pitcher he was last season as a Cy Young candidate. He owns an 11.4 K/9 on the season but has topped 7.5 strikeouts in just six of his 14 starts. He’s also feasted on poor lineups and has seen .500 teams just four times in 2022, hitting eight or more Ks just once. THE BAT projects for 5.94 punchouts.

The Houston Astros have had no issues with Robbie Ray, as the reigning Cy Young winner has an ERA north of 10.00 vs. Houston this year across two starts, totaling just eight innings.

The Astros tagged the lefty for six runs on 10 hits just five days ago, where the Seattle starter managed just one strikeout. In all, the Astros have launched five long balls against Ray, who has spent the majority of the season with an ERA above 4.00.

A ton of hard contact against Robbie Ray today. And he generated just six swings-and-misses, a season-low. The Astros were all over him. pic.twitter.com/SJ6ZWZTpom

The Houston lineup is starting to get hot after underperforming for a better part of the season in run production. This is still a lineup that sits in the Top 5 in slugging and wOBA but 14th in runs per game. Only the Yankees, Blue Jays, and Dodgers have scored more runs over the last 30 days, and only the Yankees and Braves have hit more home runs over that same stretch.

THE BAT model has him projected at 92 total pitches, and with an extreme hitter’s umpire behind the plate in Nic Lentz, Ray’s pitch count could climb again vs. a lineup that saw him well less than a week ago.

THE BAT has him projected for just 16.1 outs recorded, which makes his Under 17.5 outs a +EV play. 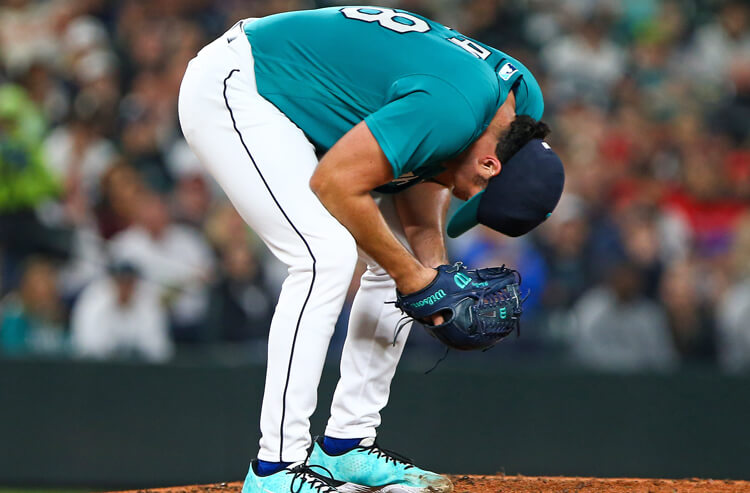