Cubs vs Giants Picks and Predictions: Cobb Comes Through in Second Half

Alex Cobb's surface numbers aren't that impressive, but his peripherals tell a different story, and create value for tonight's matchup with the Cubs. See why we're backing the Giants and their man on the mound with our MLB betting picks.

Don’t look now, but the Chicago Cubs are hot. Despite having a woeful 40-58 record, the Cubbies have won six of their last seven games.

The San Francisco Giants (49-50) have been in opposite form, winning just one of their last eight contests. They’ll need to turn things around quickly to avoid falling any further back in the National League Wild Card race, where they are now three games back after their recent skid.

Check out our MLB picks and predictions for the Chicago Cubs and San Francisco Giants on Friday, July 29.

The Giants opened as -135 favorites at home. Currently, they reside between -134 and -145 depending on the book. The total opened at 7.5 at all books and has not moved.

A) Willson Contreras & Mike Yastrzemski each Over 1.5 total bases BOOSTED TO +525 at Caesars! Claim Now

Alex Cobb (3-4, 4.26 ERA): Cobb’s first year in San Francisco hasn’t been a great success, but he’s been one of the most unlucky pitchers in the MLB. His 2.88 xERA is far removed from his 4.26 actual ERA, and his strong 2.94 FIP indicates that his xERA isn’t a fluke. His BABIP of .332 would be the highest of his career by a fair margin over the course of a full season, and one would expect that to normalize considering his career .294 BABIP. His 2.2% barrel rate is the best in the league among qualified starters.

The Cubs are 7-23 in their last 30 games against the NL West. Find more MLB betting trends for Cubs vs. Giants

I believe that the Giants are rightful favorites at home. The Cubs have been hot lately, but they picked up the loss in Game 1 of this series as the Giants got their first win since July 17th. Overall, the Cubs (40-58) have been the NL’s worst ballclubs in 2022.

The surface-level statistics may not indicate that Alex Cobb is the superior starter compared to Marcus Stroman, but the peripherals paint a different picture. Cobb holds better numbers in xERA (2.88 to Stroman’s 4.21), FIP (2.94 to 3.72), and barrel rate (2.2% to 5.1%), and overall, has the edge by a significant margin in stats that I factor into my handicapping.

It’s really quite perplexing how unlucky Cobb has been this season. He leads the majors in barrel rate, yet he’s somehow allowing an absurdly high.332 BABIP. Hitters are making soft contact against him, but also hitting for a high average? This profile screams positive regression in my opinion, and I wouldn’t be surprised to see Cobb have a strong second half of the season.

San Francisco is the rightful favorite and good fortune has to smile on Cobb at some point this season, right? Give me the home team to take the second game of the series as they get back on track for a Wild Card run.

I’m leaning toward the Under in this matchup. I was hoping to see bookmakers hang an 8, but I believe the line has been set correctly at 7.5. I still lean Under at the number, however.

If you looked just at some of Cobb’s peripherals, you would think he’s been one of the game’s best pitchers this season. His 2.88 xERA and 2.94 FIP are both strong, while his 2.2% barrel rate is almost too good to believe. Alas, he’s somehow managed to post a 4.26 ERA while the Giants are just 6-9 in games that he starts.

I still forecast Cobb to have success in the second half, and he faces a beatable Cubs lineup that ranks 19th in wRC+ during July. The Under is 13-6-1 in the Giants’ last 20 games following a win.

I’m not in love with Stroman’s profile, but he’s a fine starter and faces a Giants lineup that ranks 20th in wRC+ in July and has been ice cold during the recent 1-7 stretch.

The Cubs have cashed the Under in four straight and I expect that trend to continue Friday night.

The Cubs have been on a run lately while the Giants have been cold, but I believe that’s just given us a better line on the home team. The Giants did take Game 1 of the series, finally showing a pulse.

San Francisco is the superior team and will be fighting for a Wild Card berth, while Chicago is nothing to write home about in 2022.

I’ll be playing Alex Cobb to record at win (+195) as my best bet while also playing the Giants’ moneyline. He’s been one of the unluckiest pitchers in the game but has very solid peripherals, so I think I’m getting value on this number. 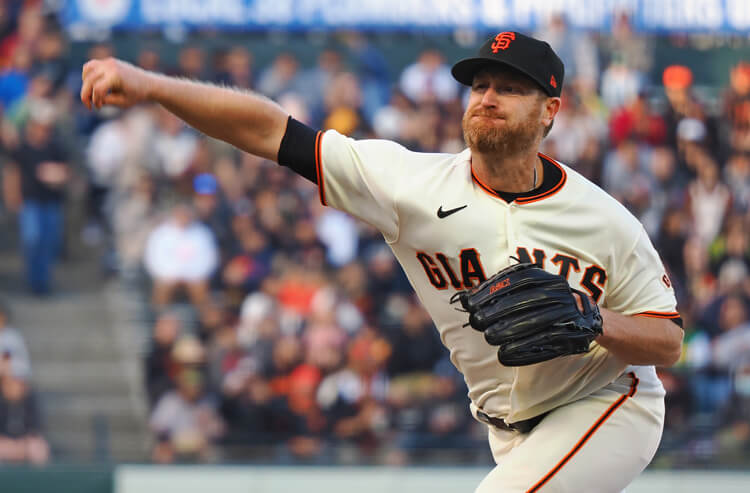 Cubs vs Giants Picks and Predictions: Cobb Comes Through in Second Half
Provided by