Braves vs Rockies Picks and Predictions: Offense Explodes at Coors

Fresh off a sweep to the Dodgers, Atlanta heads to Colorado's Coors Field for a juicy matchup against struggling starter Chi Chi Gonzalez. Can the teams eclipse the lofty 12.5 total? Find out with our Braves vs. Rockies picks and predictions.

The Atlanta Braves head to Coors Field on Thursday to kick off a series with the Colorado Rockies after getting swept by the Los Angeles Dodgers — and watching their NL East lead shrink to two games.

Atlanta coughed up late leads in back-to-back games, losing by one run in each contest after dropping the series opener to L.A. 5-3. Against a much-friendlier opponent that will start Chi Chi Gonzalez and his 6.08 ERA, can the Braves get back on track at the Coors launching pad?

Find out with our free MLB betting picks and predictions for Braves vs. Rockies on September 2.

Touki Toussaint (3-2, 3.60 ERA): Toussaint is back in the rotation after making a relief appearance in his last outing. He has allowed two runs or fewer in five of his seven starts, striking out a batter per inning along the way. The righty is enjoying a nice bounce-back season that began in the minors after two awful years in a row.

Chi Chi Gonzalez (3-6, 6.08 ERA): Like Toussaint, Gonzalez finds himself getting another start following a brief demotion to the bullpen. An injury to Jon Gray created an opening in the Rockies' rotation and the club has elected to turn to Gonzalez, despite his repeated struggles this season. He has allowed four runs or more in five of his last nine starts and has finished every month this season, outside of April, with an ERA over 5.00.

Braves: Ozzie Albies 2B (Questionable), Ronald Acuna Jr. OF (Out), Marcell Ozuna OF (Out).
Rockies: Yonathan Daza OF (Out).
Find our latest MLB injury reports.

Atlanta is 5-2 in the last seven meetings in Colorado. Find more MLB betting trends for Braves vs. Rockies.

The Braves hung tough with the Dodgers and had them on the ropes multiples times throughout their recent series, but there are no moral victories at this point in the season. A loss is a loss, and as well as the Braves have been playing they'll need to step it up as the Philadelphia Phillies and New York Mets, to a lesser extent, are right behind them in the division standings.

Well, it would be hard to draw up a better bounce-back spot for the Braves than tonight's matchup at Coors Field against Gonzalez, who has been tattooed repeatedly this season.

After facing a trio of Julio Urias and NL Cy Young favorites Walker Buehler and Max Scherzer, just about any other pitcher would be a welcome sight. But Gonzalez has the fifth-highest ERA in baseball among pitchers who have thrown at least 90 innings (Buehler and Scherzer have two of the Top-5 lowest marks) and he has been crushed whether he's pitched at Coors or on the road. This is a terrible matchup for him against Atlanta's powerful lineup.

As for Toussaint, his track record isn't pretty but the former first-round pick was decent in the minors before his promotion and has continued that with the big league club. He got shelled in one of his seven starts but has otherwise given the Braves solid innings and provides them with the starting pitching advantage for the series opener.

Despite the three straight losses, the Braves have been on a good run that helped the club climb into the top spot in the NL East. They've received strong pitching and have continued bashing to go 32-21 since the start of July. They are the only team in the division with a positive run differential and, despite the Dodgers series, have a 68 percent chance of winning the East, according to FanGraphs.

This is simply a game a team with playoff aspirations has to win, and we expect Atlanta to do just that. In fact, as good as the Rockies have been at home this season (43-22 compared to an unsightly 18-50 on the road), we're going to back the Braves -1.5 at better odds.

The total for tonight's game is huge and easily the highest on the board among today's eight-game MLB betting slate, but we're not shying away from the Over.

We've touched on Gonzalez and what makes this especially problematic for him is that the Braves mash, ranking third in the majors in homers, sixth in slugging, and eighth in OPS on the season. And they have been hitting every bit as good post-All-Star break.

Gonzalez's inability to miss bats (5.13 K/9) and serve up bombs (1.62 HR/9) won't do him any favors in this matchup, making Atlanta a strong bet to get past their 6.5 team run total and do the majority of the heavy lifting on this number. Right-handed hitters are slugging .600 off Gonzalez with a .951 OPS, setting up Atlanta's big righty bats like Dansby Swanson, Adam Duvall, and Austin Riley, for a big night.

The Over has gone 10-5-1 in Gonzalez's 16 starts and he'll be followed by a bullpen that has the third-highest ERA (5.11) in baseball as well as the second-highest WHIP and batting average against.

Colorado might be bad but it is a different team at home and takes advantage of its hitter-friendly park. The Rockies are first in the majors in runs scored, batting average, on-base percentage, slugging, and wOBA at home and right at the bottom of the league in all those categories on the road.

While Toussaint has been serviceable for Atlanta, he has struggled keeping the ball in the yard — allowing homers in five of his seven starts and surrendered multiple bombs twice — and certainly can't be trusted at Coors. 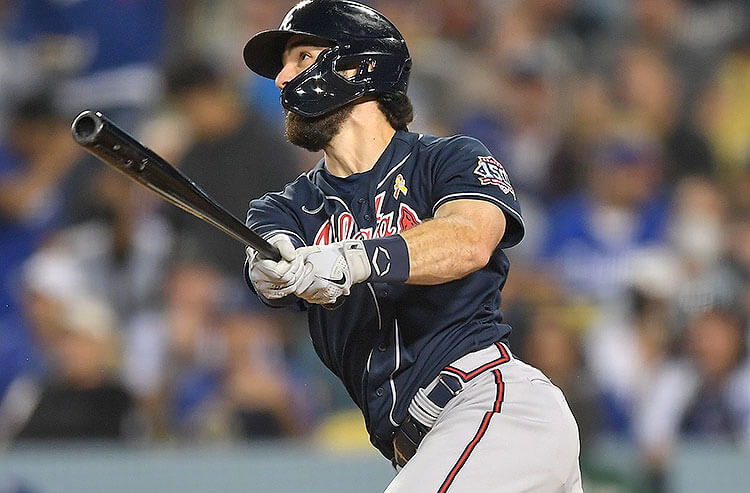 Braves vs Rockies Picks and Predictions: Offense Explodes at Coors
Provided by