A's vs Tigers Picks and Predictions: Oakland Cruises Through the Motor City

Oakland has had Detroit's number all season and goes into Thursday's series finale as MLB betting favorites. Our picks and predictions find the value in the A's and Tigers' final matchup of the 2021 season.

The Oakland A's and Detroit Tigers will battle in a Thursday matinee to wrap up a three-game series, as Oakland remains in the AL wild card chase while Detroit fades further and further from view.

Oakland enters Thursday as -161 MLB betting favorites, while Detroit comes back as +148 underdogs. The total hit the board at 9.0.

Check out our free picks and predictions for the A's vs. Tigers on September 2 and find out where the betting value is in the Motor City.

Sean Manaea (8-9, 3.97 ERA): The towering starter is coming off one of the worst starts of his season, as he was chased after 4 1-3 innings, giving up seven hits, five earned runs (including three homers) while striking out five. This will be Manaea's second start against the Tigers this season after he earned the win pitching six innings of two-run ball, striking out seven, in mid-April.

Matt Manning (3-5, 5.46 ERA): After a string of rough outings, Matt Manning held the Blue Jays to just one earned run across six innings in his last start, though he did allow six hits in that stint while striking out five. This will be Manning's first start against Oakland on the year.

The Under is 12-4-1 in the last 17 meetings between the A's and Tigers. Find more MLB betting trends for A's vs. Tigers.

The A's rolled into Detroit on Tuesday and cruised to a 9-3 win in the series opener, pushing their 2021 mark against the Tigers to 5-0 ahead of Wednesday's game two. While Oakland fights in a tight wild card chase, a game back of the Red Sox and 2.5 up on the Mariners, Detroit has cratered over the last few weeks dropping 11 of its last 16 games, a stretch that has featured two four-game losing streaks.

Though neither team excels at the plate, both ranking in the bottom half of the league in most batting stats, the big difference comes in their ability to limit runs — or lack thereof, in the case of Detroit.

The A's allow just 4.0 runs per nine innings, the fourth-best mark in the Majors, while both the OPS and home runs per game marks are in the Top 10. Detroit, meanwhile, is in the bottom-10 in every major defensive category. Its inability to strike batters out is of particular issue, with only three teams striking out fewer batters per game.

Thursday's starter, Matt Manning, is a great example of this as he is averaging just 5.2 strikeouts per nine innings this season. Averaging just five innings per start this year, it won't get much better for Detroit after he leaves the game, as he'll hand the ball over to a bullpen with the seventh-highest ERA and third-highest WHIP in the Majors.

The A's have the advantage at the plate and on the mound, and have rarely been challenged by the Tigers in their season series this year. Trust Oakland to win by multiple runs on Thursday.

It's a bit of a surprise to see the total in this one hit the board at 9.0, as all signs point toward the Under.

Both teams lean toward the Under in their season-long O/U marks, with Oakland coming in at 60-68-4 and Detroit 57-71-5. Both are subpar hitting teams, with the Athletics ranking in the bottom half of the league in runs per nine innings, batting average, and OPS, with the Tigers joining them there while also hitting the seventh-fewest home runs per game at 1.13.

Detroit's Comerica Park is one of the least batter-friendly parks in the Majors, with only Citi Field, Tropicana Field, and Marlins Park ranking below its park factor of 0.846.

While Sean Manaea may give Oakland the edge on the mound, Detroit's Matt Manning has rewarded Under bettors quite consistently lately, with three Unders and a push in his last five starts. The Tigers as a team, too, have been Under locks lately, going 1-9 O/U in their last 10 games, a stretch that has included five totals of 9.0 or more.

Not only is the Under 12-4-1 in the last 17 games between these two, but it's 5-2 in the last seven games in Detroit and 3-2 overall this year. Oakland may beat up on the lowly Tigers but this one is headed Under the total. 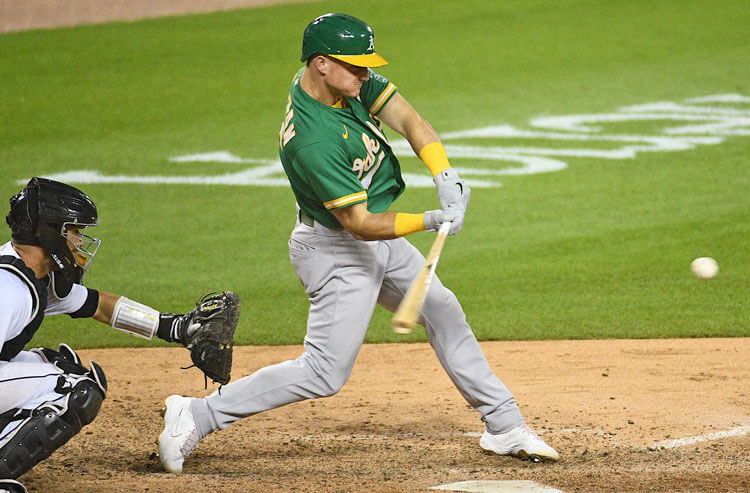 A's vs Tigers Picks and Predictions: Oakland Cruises Through the Motor City
Provided by