Braves vs Dodgers Picks and Predictions: Max and Max Spin Gems in Finale

Atlanta is looking to avoid a three-game sweep behind Max Fried, who has a 2.21 ERA over his last nine starts. He'll be up against Max Scherzer, who has dominated in Dodger Blue. Find out if Atlanta, a +185 'dog, can win in our Braves vs. Dodgers picks.

The Los Angeles Dodgers go for a three-game sweep of the Atlanta Braves on Thursday with stud deadline acquisition Max Scherzer on the bump.

Los Angeles rallied late Tuesday to come away with a 3-2 win following a two-run victory in the series opener. Now the club, which moved 0.5 games back of the NL West lead, will deploy Scherzer (1.55 ERA over five starts with the Dodgers) as huge MLB betting favorites for the series finale.

Find out if we like L.A. to sweep in our Braves vs. Dodgers picks for September 1.

Max Fried (11-7, 3.54 ERA): Fried's ERA was 11.45 at the end of April and 5.12 at the start of June. He has started 14 games since and put up a 2.83 ERA, with the Braves winning 10 of those contests. While Fried stumbled a bit in his last outing against the first-place Giants, allowing four runs (three earned) over six innings, he had allowed two runs or fewer in five consecutive starts before that.

Max Scherzer (12-4, 2.51 ERA): Scherzer has been downright dominant since joining the World Series favorites — not that the NL All-Star Game starter was struggling with the Nationals before that. The righty has made five starts with L.A., allowing no more than two runs in any of them while walking five and striking out 41 over 29 innings. He's coming off a 10-strikeout, two-hit performance against the rival Padres, marking the second time he has recorded double-digit Ks with the Dodgers.

The Under is 5-2 in the last seven meetings. Find more MLB betting trends for Braves vs. Dodgers.

The Braves have lost five of their last seven (all against teams holding playoff spots), including two close games to the Dodgers, after feasting on an easier schedule, but they still hold a 2.5-game lead in the NL East and are playing .615 ball since the start of July.

Even without superstar Ronald Acuna Jr., Atlanta looks like a threat in the NL thanks to a capable rotation and a slugging offense that has seen Austin Riley, 2020 MVP Freddie Freeman, and Dansby Swanson tear the cover off the ball since the All-Star break. Deadline acquisitions Jorge Soler, Joc Pederson (who took Walker Buehler deep last night), and Adam Duvall have also added some big thump to a lineup missing its best piece.

One of the pitchers leading the way for Atlanta is Fried — the other stud Max that's toeing the rubber for this matchup. Fried has a 2.21 ERA while holding opponents to a .590 OPS over nine outings since getting blown up by the Pirates in his first start of July. He doesn't get burned by the long ball much, doesn't give away many free bases, and punches out batters at an above-average clip. His strikeout-to-walk rate is better than 5/1 during that stretch, as he walked just two batters over five August starts.

The Dodgers are the best team in baseball, even if their record doesn't quite back it up, and Scherzer is still throwing like he's in his prime as a 37-year-old veteran. Still, the Braves are legit, and while we don't expect them to pound Scherzer, that's not the point — we're not going to pass on taking them at +185 odds with Fried on the bump, even on the road against Mad Max.

That value is too good to ignore. If you're having trouble getting behind them to win straight up, Atlanta +1.5 is paying out at a very reasonable -115.

The same logic that made us pick the Braves and the Under last night applies today.

Tonight’s starting pitching matchup is equally as good as last night’s Charlie Morton/Buehler duel, which means offense is going to be hard to come by. Morton outdueled the NL Cy Young favorite Walker, holding the Dodgers to one run over six innings while the L.A. co-ace held the Braves to two runs over seven frames.

We suspected the bullpens would have some room for error and they did, with the Dodgers plating runs in the seventh and eighth to ruin the ML pick but still keep us Under the 7.5 total. That’s essentially what we are expecting again tonight.

Scherzer has been even more of a beast since donning Dodger Blue, allowing five runs total over five starts to make him an enticing play at +1,500 in the Cy Young odds race. The Braves hit bombs, ranking third in the majors on the season and fourth post-ASG, and Scherzer has struggled with the long ball this season. We like an Atlanta homer to be the difference and help the ML pick, but the Braves are going to struggle to get guys on, which means we still expect Scherzer to hold their offense in check.

Fried isn't Scherzer but his ability to limit walks will help him slow down a Dodgers team that has strong power numbers against lefties (hitting for extra-bases at the second-best rate in MLB) but has difficulty to get on-base versus them, sitting 21st in OBP. Expect both of these guys to deal and leave their bullpens with very little work for the night.

The Under has cashed in 16 of Scherzer's 24 starts, each of the first two games of this series, six straight Dodgers games overall, and in eight of their last 10. In this Max vs. Max showdown, we're betting on it cashing again. 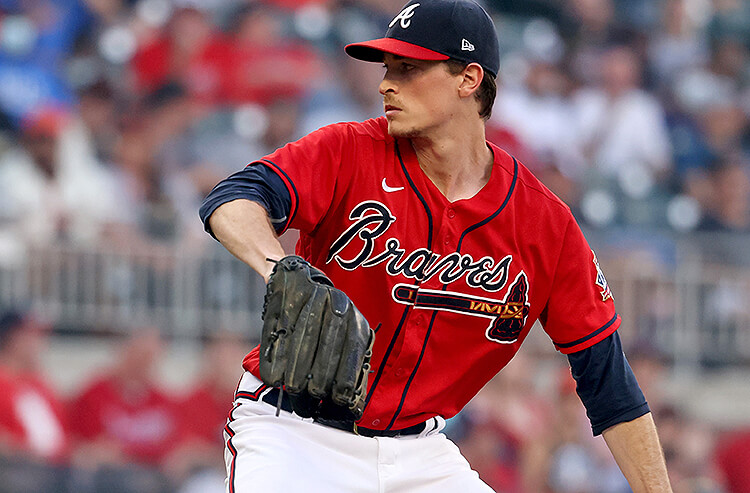 Braves vs Dodgers Picks and Predictions: Max and Max Spin Gems in Finale
Provided by