Brewers vs Giants Picks and Predictions: Milwaukee ML In Play Against Struggling Gausman

The Giants have lost the first two games of their series against Milwaukee's two ace starters. They're getting an easier matchup in Brett Anderson and have their own ace going today — but does that mean we're going to back San Fran?

It’s a battle of National League division leaders as the San Francisco Giants host the Milwaukee Brewers Wednesday night. The Brew Crew have taken the first two games of this four-game set and will try to secure the series win tonight.

But the Brewers will be sizeable MLB betting underdogs in this one, going up against Giants’ ace Kevin Gausman. Will San Francisco bounce back or does Milwaukee have value to win again?

Check out our MLB free picks and predictions for Brewers vs. Giants on Wednesday, September 1, and find out.

Brett Anderson (4-8, 4.27 ERA): We won’t go crazy and say Anderson has been good lately, but he certainly hasn’t been bad. The veteran lefty has limited opponents to three earned runs or fewer in nine of his last 10 starts.

Kevin Gausman (12-5, 2.49 ERA): Gausman has been the Giants' best starter all year long, but since the All-Star break he has looked a little more mortal, pitching to a 4.82 ERA and allowing opponents to hit for .281 batting average in an eight-starts stretch.

The Brewers are 9-2 in their last 11 games as a road underdog. Find more MLB betting trends for Brewers vs. Giants.

San Francisco is hoping Gausman is the guy to put an end to this skid but, as mentioned, he has been getting hit with a lot more regularity since the All-Star break and has a 1.58 WHIP over his last eight starts. Gausman now faces a Brewers lineup that has been more potent of late, ranking fifth in batting average and seventh in OPS against right-handers in the month of August.

Opposing Gausman is Anderson and while he's not Corbin Burnes or Brandon Woodruff, the veteran lefty has been surprisingly effective. Anderson is pitching to a 3.66 ERA and a 1.09 WHIP over his last 10 starts and faces a San Fran lineup that, while very deep, is a mediocre 16th in batting average and 11th in OPS when facing southpaws this season.

With all this in mind, this is a good price to back the underdogs tonight.

When it comes to the total, 7.5 may be giving the starters a touch too much respect in this matchup. We already spoke about how the Brewers should be able to have some success against Gausman, but the Giants are in first place for a reason and should be able to take advantage of the matchup with Brett Anderson.

While he has been solid, this is still Brett Anderson we are talking about here. Despite the success, the lefty ranks in the Bottom-4 percentile of the MLB in hard-hit percentage, expected batting average, and strikeout percentage — a Giants team that ranks fifth in OPS and is second in home runs per game should be able to get back on track.

This number is just low enough to like the Over. 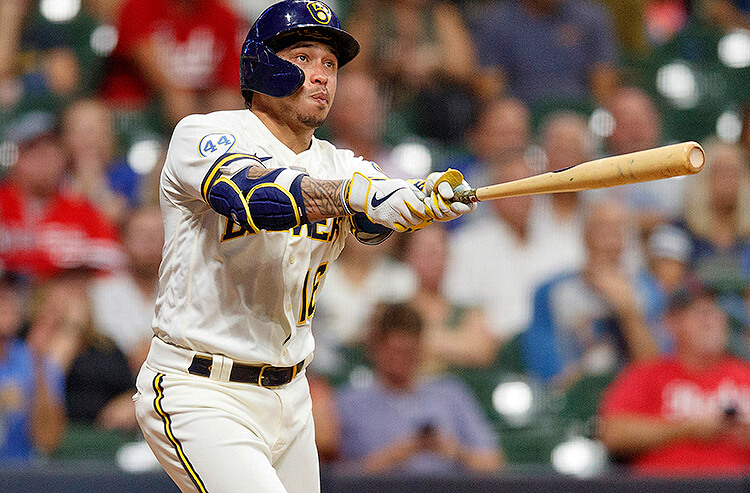 Brewers vs Giants Picks and Predictions: Milwaukee ML In Play Against Struggling Gausman
Provided by