Red Sox vs Rays Picks and Predictions: Despite Facing Sale, Tampa Bay's Value At Home Too Good To Ignore

Tampa Bay has won seven straight at home against Boston and nine straight overall. The Rays are home dogs tonight against Chris Sale, however, but does that just mean added value for the AL's top team? Find out in our MLB picks and predictions.

Xander Bogaerts tested positive for COVID-19 on Tuesday, which was just icing on the cake of misery for the Boston Red Sox, who have lost the first two games of this four-game series against the Tampa Bay Rays — and seven straight at Tropicana Field.

Boegaerts is just the latest player lost in a recent COVID outbreak for Boston, who will obviously be without the superstar when they try to halt their Tampa troubles on Wednesday night.

The good news is the Sox will have former ace Chris Sale on the mound — and MLB betting lines have Boston as road chalk — but will that be enough to grind out a much-needed win? Find out in our Red Sox vs. Rays picks and predictions for Wednesday, September 1.

Chris Sale (3-0, 2.35 ERA): Sale recently returned after almost two years away from starting an MLB game, and the lefty hasn’t looked rusty in any capacity. In 15 1-3 innings of work over three starts, Sale has allowed only four earned runs. The 32-year-old has also struck out 21 batters over those three games. The former Cy Young winner does, however, face a tough test against the Rays in this one, which is also his first road start of the season.

Drew Rasmussen (1-1, 3.46 ERA): Rasmussen pitched four innings of one-run ball against the Red Sox back on August 12, and the righty struck out four batters in that game. The 26-year-old likely isn’t going to pitch deep into the game, as he was a reliever for most of the season, but as he has given up just two runs over his last 13 innings of work, it’s unlikely he ends up being the reason Tampa Bay loses.

Red Sox: Xander Bogaerts SS (Out), Kike Hernandez 2B (Out), Christian Arroyo 3B (Out), Danny Santana OF (Out), Matt Barnes RP (Out), Josh Taylor RP (Out).
Rays: Ji-Man Choi 1B (Out), Nick Anderson RP (Out).
Find our latest MLB injury reports.

The Rays are 42-14 in their last 56 games against AL East opponents. Find more MLB betting trends for Red Sox vs. Rays.

Sale is making his first road start in more than two years, leaving the familiar setting of Fenway Park for Tropicana Field — and he's facing a Rays team that is Top 5 in the MLB in RBIs against left-handed pitching. That could mean some trouble, but it’s hard to envision Tampa hitting Sale too hard: The lefty has just looked so good since returning to the rotation that it feels as though the time off actually helped him.

Still, the Rays do have some good matchups in this game, with Nelson Cruz being 9 for 29 with two homers, and four RBIs against Sale in his career, while Yandy Diaz and Kevin Kiermaier have also combined to go 10 for 26 with six RBIs against him. Don't expect Tampa to hang a terribly crooked number tonight, but they have a good shot at scoring three or so — and that might be enough.

The 26-year-old Rasmussen has yet to throw 60 pitches or six innings in a single outing this year but he hasn’t allowed more than a single run in any appearances since July 5. The Rays then have the luxury of throwing out the league’s best bullpen to back him up, as Tampa Bay’s relievers have a combined 3.16 ERA this season.

Tampa has won seven straight at home against Boston and nine straight overall. With the Rays getting plus money against a shorthanded BoSox club tonight , we can't say no.

Sale has been locked in since returning to the Red Sox rotation, as he has given up two or fewer runs in each of his three starts.

Sure, some of these Rays hitters have done well against the southpaw in the past, but it’s not extremely likely that Sale gives up more than three or four runs over five or six innings of work in this game.

Meanwhile, the Rays are sending Rasmussen in for this one, which likely means penciling in one or two runs over five innings. Then, Tampa Bay gets to turn to an elite bullpen to shut Boston down the rest of the way, making it hard to see a path to nine runs in this game.

These teams combined to score 13 on Tuesday but that featured a greatly inferior starting pitcher for Boston and the Rays giving up some late runs with a huge lead. We think they’ll slow down a little tonight. 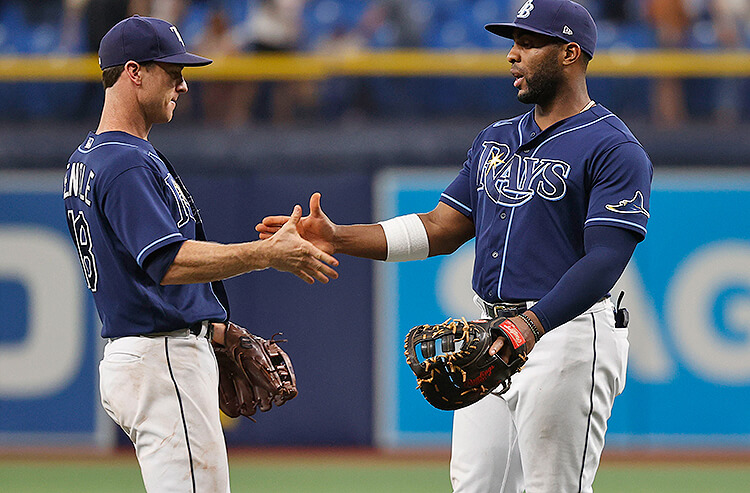 Red Sox vs Rays Picks and Predictions: Despite Facing Sale, Tampa Bay's Value At Home Too Good To Ignore
Provided by