Yankees vs Angels Picks and Predictions: New York Heads Home on a High

Cy Young favorite Gerrit Cole will take to the mound for the Yankees as they end their road trip in Anaheim against the Angels. Find out where the MLB betting value lies in a lopsided matchup with our picks and predictions.

The New York Yankees and Los Angeles Angels will wrap up a three-game series in Anaheim on Wednesday, as New York finishes a west coast swing that has slowed its outstanding second half of the season and snapped a 13-game win streak.

Can the Bronx Bombers end their road trip on a high before returning home for two AL East series? Read on for our free MLB betting Yankees vs. Angels picks and predictions for September 1.

Gerrit Cole (13-6, 2.80 ERA): The AL Cy Young betting favorite has continued a great campaign, earning the win in each of his last three starts while going no deeper than six innings. This will be Cole's second start against L.A. this season after he went 5 2-3 innings in mid-August. That outing saw Cole get the win after striking out nine batters and allowing just two hits in his return from the COVID-19 list.

Packy Naughton (0-0, 1.69 ERA): After two relief appearances for L.A. this season, Naughton will make his first career start on Wednesday. Naughton's two appearances in 2021 have stretched across 5 1-3 innings and he has allowed just one earned run in that span.

Yankees: Miguel Andujar 3B (Out), Gleyber Torres SS (Out), Clint Frazier OF (Out), Aroldis Chapman RP (Out).
Angels: Franklin Barreto SS (Out), Mike Trout OF (Out), Anthony Rendon OF (Out), Austin Warren RP (Out).
Find our latest MLB injury reports.

The Yankees are 6-2 in the last eight meetings vs. the Angels in Los Angeles. Find more MLB betting trends for Yankees vs. Angels.

New York has been fantastic over the last month, with 21 wins in August going into the final game of the month. While two losses in Oakland opened the door in the wild card race, a series finale in Anaheim presents a good spot for a win. The Yanks are 6-2 over their last eight at Angel Stadium and will turn to Cy Young favorite Gerrit Cole.

Cole heading to the mound for New York would mean a pitching mismatch in most games but especially so in this spot, as the Angels will turn to Packy Naughton, who is making his first career Major League start. While Naughton has been solid in very limited relief work for the Angels, he reached the big leagues on the back of an underwhelming minor league career.

In 78 starts across four years in the farm, Naughton had a 21-27 record, with a 3.77 ERA and a 1.304 WHIP. Worryingly for L.A. on Wednesday, Naughton's ERA and WHIP grew with each promotion from A to AA to AAA, while his hits allowed per nine innings grew all the way to 11.0 in AAA.

For an Angels team that already struggles to limit the opposition, as they rank in or just outside the Bottom 10 in runs per nine innings, opposing batting average and OPS, and home runs per game, the disadvantage of sending Naughton to the mound is huge.

With the exception of a two-game blip in the Bay Area, New York's bats have been more than good enough to punish shaky starters over its red-hot August. With that being the scenario handed to it on Wednesday, and Cole on the mound for the Pinstripes, take the Yankees to cover the run line.

The Angels, poor at limiting the opposition but an above-average hitting team themselves, are unsurprisingly a very solid Over bet, at 73-58-1 O/U in 2021 and were 14-8 O/U in August on totals of 8.5 or higher. The Yankees, meanwhile, were anything but Bronx Bombers to begin the season but seemingly came alive during their superb August, as they averaged nearly a full run more than their season-long mark, crossing 5.35 runs per game in August compared to 4.45 for the year.

Cole will make it tricky on the two teams to go Over, but between New York's hot hitting and the Angels' unconvincing pitching situation, the Yankees should do enough to carry this one over.

While Naughton went 4 1-3 innings in his previous relief appearance and should make it decently long in this one, he will not go deep into the game. When he bows out, he'll hand the ball over to a bullpen that has the seventh-highest ERA and sixth-highest WHIP this season.

New York should be presented with a great game to continue its hot hitting, and that means an Over on the total in this one. 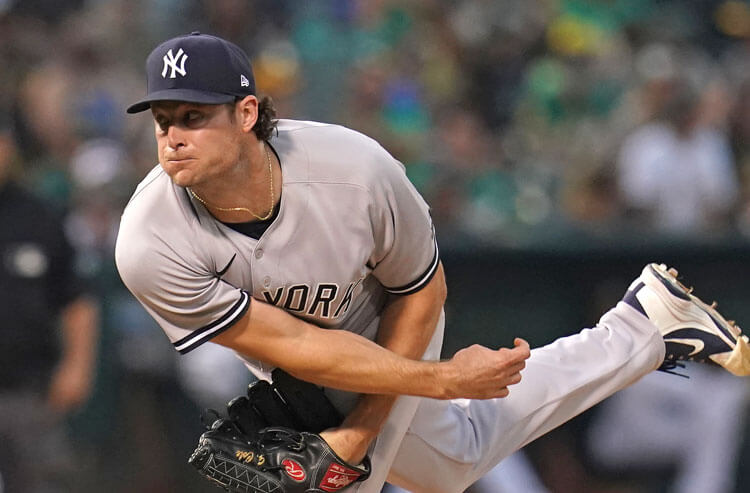 Yankees vs Angels Picks and Predictions: New York Heads Home on a High
Provided by