Toronto has won six in a row and nine of its last 10 to move within 2.5 games of New York, which holds the American League's first wild-card spot. Find out why we're backing Toronto again at plus money in our Blue Jays vs. Yankees picks.

The red-hot Toronto Blue Jays go for the series win — and their seventh consecutive victory — when they meet the slumping New York Yankees in the Bronx on Wednesday night.

Toronto has outscored the Yankees 13-1 over the first two contests of this four-game set, moving 2.5 games back of New York for the American League's first wild-card spot. A pair of rookies square off tonight, with 6-foot-6 righty Alek Manoah getting the ball for Toronto, while the slightly favored Yanks counter with hard-throwing Luis Gil.

Find out who we like in our free MLB betting picks and predictions for Blue Jays vs. Yankees on September 8.

Alek Manoah (5-2, 3.63 ERA): Manoah is coming off a rough start in which he allowed six runs over five innings to drive his ERA from 3.15 to 3.63, which is the highest it has been in over two months. But he had been dealing outside of one clunker before that, allowing two runs or fewer in seven of his previous nine outings in what has been a strong rookie season for Manoah, who has cemented himself as a staple of this rotation.

Luis Gil (1-0, 0.00 ERA): Gil, MLB.com's No. 4-ranked Yankees prospect, has delivered in his first taste of the big leagues. He got three starts in August and combined to throw 15 2-3 scoreless innings while punching out 18. The 23-year-old walked four in his last start and has had high walk rates throughout his minor league career, but he possesses swing-and-miss stuff that has helped him work around that.

The Under is 11-4 in the last 15 games between the Jays and Yankees. Find more MLB betting trends for Blue Jays vs. Yankees.

The Blue Jays might be looking up to the Yankees in the standings, but there is no question who the better team is right now. Toronto handed New York its fourth straight loss in last night's 5-1 victory while winning for the ninth time in its last 10 games.

The fourth-place Jays have the third-best run differential in the AL and are fifth in all of baseball at +140, while the wild-card leading Yankees are at +39. New York has dropped eight of its last 10 since a dominant stretch that saw it reel off 13 consecutive wins and it will be in tough for the remainder of this series, beginning with tonight's starter, Manoah.

Toronto's big arm returns to where he made his impressive debut back in May, when he held the Yanks to two hits over six scoreless innings while punching out seven. He's been largely good since, cutting down his home run rate considerably since June while holding opponents to a .203 average and striking out 10.1 batters per nine innings over a span of nine starts.

Manoah's strikeout numbers should once again play up at Yankee Stadium, as New York has the sixth-highest K rate in baseball this season and the top mark in the AL since the All-Star break (Toronto has been, in comparison, by far the toughest team in MLB to strikeout over that stretch). The lack of swing and miss, coupled with a collection of power bats, not only makes the Blue Jays a huge threat at the dish but gives Manoah and the bullpen some room for error.

The Blue Jays have been mashing the ball, scoring at least five runs in each game over their win streak, and have already taken advantage of the short Yankee Stadium porch in right field multiple times this series. With the way they're cooking, we're not going to pass on them at plus money.

Toronto is averaging 7.8 runs per contest throughout its hot streak and has drilled seven homers in the last two wins over New York, with Marcus Semien going yard three times (and in five of his last six games to sit two shy of 40).

The Jays — who rank first in the majors in homers, slugging, and OPS — are going to be involved in a lot of high totals, and tonight is no different with the Over/Under set at 10. The only game on Wednesday's MLB betting board with a higher total is being played at Coors Field.

As dangerous as Toronto's offense has been, it hasn't hit that 10 total in four of its six straight wins. The Blue Jays bats have been doing the heavy lifting on the totals, but their pitching has been filthy and is driving the number down, with the Under cashing in three straight and seven of their last 10 games. Toronto has the best team ERA in the AL over the last 15 days at 3.31 and has a mark of 2.97 over the last 10 games.

The Jays will be up against a rookie who hasn't allowed a run in three starts while holding opponents to a .158 average and striking out 10.3 batters per nine innings. He has also thrown well in the minors this season, too. Though Gil has battled control issues, he has an overpowering fastball that has helped him generate a 12.86 K/9 rate in the minors while holding opponents to a .196 average in 11 Triple-A appearances.

In the thick of the playoff race, this will be the biggest stage that Manoah and Gil have ever pitched on, but that's not reason enough to fade them. They will be tough assignments and we're confident they will deliver before turning the ball over to the bullpens. Even if Toronto tees off then, we're not counting on the Yanks to do the same, which is why we're betting on another Under cashing.

The Yankees cash Overs at the lowest rate in baseball and have gone Under in five of their last six games. The head-to-head has struggled to cash Overs, too, with the Under 7-1 in the last eight games in the Bronx and 11-4 in the past 15 contests between the division rivals. 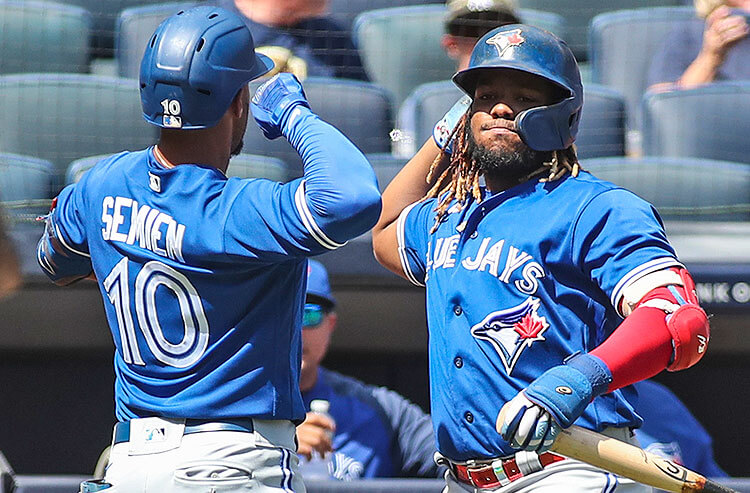 Blue Jays vs Yankees Picks and Predictions: Toronto Can't Be Stopped
Provided by