Our MLB prop picks for Wednesday are taking us to Fenway Park, where the host Red Sox are bleeding runs and the Rays are looking to take advantage, and checking in on All-Star Freddy Peralta as he looks to break out of a slump in a great spot.

The MLB postseason race is heating up, and so is the baseball prop betting market. With 15 games on the board to bet, including three matinee matchups, it means we have MLB props to bet all day.

Today, we turn our attention to Fenway Park where the Boston Red Sox are in desperate need of a win. Can Nathan Eovaldi slow down the red-hot Tampa Bay Rays, or is their team total too tempting to pass up?

We break down and pick this game and more with our best free MLB prop bets and predictions for Wednesday, September 8.

Miami Marlins starter Sandy Alcantara has been in a strikeout groove of late and he’ll look to keep racking up the Ks as he and the Marlins host the New York Mets.

Outside of one meltdown in Colorado, Alcantara has been on point since the start of August, pitching into the seventh inning in six of his last seven starts and surrendering two runs or fewer in five of those seven.

Part of the reason for that effectiveness has been the right-hander's improved strikeout numbers. Alcantara’s strikeouts per nine innings is up to 10.6 since the start of August and he has gone over this number six times in his last seven starts, including last time out against this same Mets team.

Bet on the punchouts to keep on coming for Alcantara in this one, going against a Mets team that has struck out once every 2.9 at-bats against right-handers over the last week.

The Boston Red Sox have allowed 34 runs over their three-game losing streak, and they need a win in a big way after dropping the first two games of their series to the Tampa Bay Rays.

The BoSox will hand the ball to Nathan Eovaldi in hopes of turning things around. The right-hander is dealing right now, pitching to a 2.35 ERA and a 0.98 WHIP while racking up 39 strikeouts in 30 2-3 innings over his last five starts.

Eovaldi already has two excellent starts against the Rays at Fenway Park this season but got throttled in a matchup at Tropicana Field. While he has performed well in this matchup when pitching at home, the Rays' offense is red-hot right now.

The Rays have won 17 of their last 21 games, plating 7.05 runs per game over that span while going Over today's team total 17 times.

On top of that, no matter how Eovaldi performs, he’ll have to hand the ball to a Boston bullpen that is really struggling lately. Red Sox relievers rank 23rd in ERA and 25th in WHIP over the last 30 days. We’re betting the Rays eclipse their team total once again.

Milwaukee Brewers starter and All-Star Freddy Peralta is in a bit of a slump, allowing seven runs on eight hits in just four innings of work over his last two starts. But Peralta will have a chance to bounce back as he and the Brew Crew host the Philadelphia Phillies.

Despite the slump, the right-hander still owns a 2.70 ERA and is limiting opponents to a ridiculous .153 batting average this season. Today, he goes against a Phillies lineup that ranks 24th in batting average and 21st in OPS when facing right-handers over the last 30 days.

The Phillies counter with a right-hander of their own in Kyle Gibson. Gibson has had his ups and downs as a member of the Phillies but is coming off one of his worst starts of the season, surrendering eight runs on eight hits last time out against the Marlins.

Gibson is also allowing opponents to hit for a .252 batting average since joining the Philly rotation and now goes up against a Brewers lineup that has been crushing right-hander lately. Milwaukee ranks fourth in batting average and third in OPS when facing righties over the last 30 days, making the Brewers a good bet to have the lead through five innings. 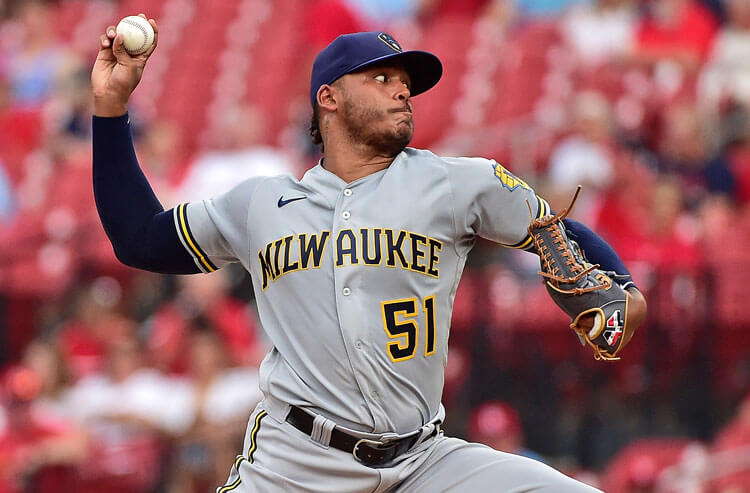