After an exhilarating end to the NFL divisional playoff round, it’s on to the conference championship games, with Super Bowl berths on the line. Covers checks in on the opening lines and early movement, with insights from Scott Cooley, odds consultant for offshore sportsbook Bookmaker.eu.

Jacksonville is the surprise guest of the four still around for this playoff party, finally getting a boost from its often inept offense. The third-seeded Jaguars (12-6 SU, 10-8 ATS) forced two turnovers that led to 14 points Sunday at No. 2 Pittsburgh, but also piled up 31 more points of their own volition on the way to a 45-42 shootout victory as a 7-point underdog.

Meanwhile, there was nothing unusual or unexpected about top-seeded New England earning yet another trip to the AFC title game. The defending Super Bowl champion Patriots (14-3 SU, 12-5 ATS) spotted Tennessee a 7-0 lead Saturday, then steamrolled to a 35-14 victory as a hefty 13.5-point home favorite.

“We didn’t even want to tempt the bettors with anything closer to a touchdown, and it’s a good thing, because as expected, all of the early money is on New England,” Cooley said. “This spread is probably going to creep north as the week goes on, but I’d be shocked if it went off at double digits. I’m certainly not expecting Jacksonville to win with Blake Bortles at quarterback, but that defense could keep things interesting.”

After opening the Pats -8, Bookmaker.eu was already up to 9 by late Sunday night. ()

By way of one of the most amazing plays in NFL postseason history, Minnesota (14-3 SU, 11-6 ATS) could still become the first team to play the Super Bowl in its home stadium. The second-seeded Vikings appeared dead in the water Sunday, trailing 24-23 at home after No. 4 New Orleans hit a field goal with just 25 seconds remaining.

The Vikings faced third-and-10 on their own 39 with 10 seconds left and no timeouts when quarterback Case Keenum hit wideout Stefon Diggs 30 yards downfield near the sideline. Inexplicably, Saints safety Marcus Williams completely whiffed on what would have been a game-ending tackle if made inbounds, and Diggs raced to the end zone to give the Vikes a 29-24 victory as a 5.5-point favorite.

So Minnesota gets an NFC championship date with No. 1 seed Philadelphia, a team that wasn’t expected to survive without QB Carson Wentz, but remains alive and of course with home-field advantage. The Eagles (14-3 SU, 11-6 ATS) went off as 2.5-point underdogs to defending NFC champ and No. 6 seed Atlanta on Saturday, but scrapped their way to a 15-10 victory.

“Philly in the underdog role once again, but this go-round, they are deserving of the tag,” Cooley said. “We saw a lot of moneyline money on that side against Atlanta, and will likely get the same action here. Minnesota was fortunate to get a win in the divisional round, but it was by far the better team.

“Two fantastic defenses on display,” Cooley said of the upcoming NFC title tilt, “which should make for an exciting game for the football purists.”

Minnesota drew the early action Sunday night at Bookmaker.eu, bumping the line up to 3.5. 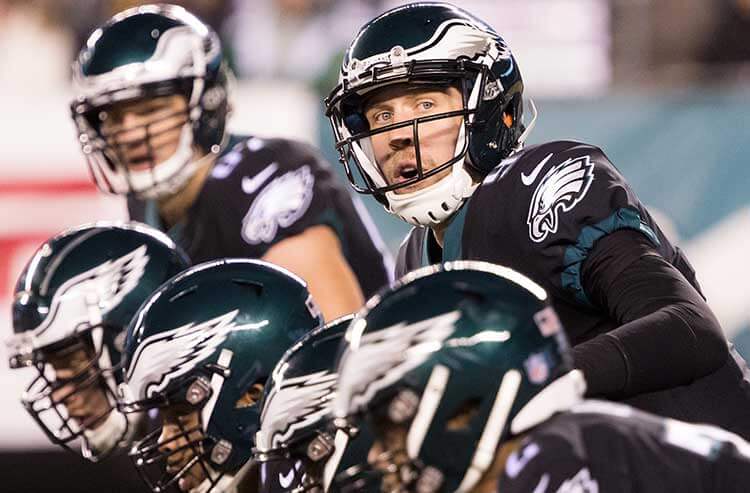