Connecticut went into Los Angeles a few days ago and promptly hammered the lifeless Sparks without trouble. The pair clash again today in L.A., and our WNBA betting picks expect another routine win for the Sun.

No, it’s not déjà vu. After thrashing the Los Angeles Sparks on Tuesday night, the Connecticut Sun are back for more just two days later. While the Sun are ramping up for a deep playoff run, with their eyes firmly fixed on a potential championship, the Sparks are veering close to “1-2-3 Cancun!” territory.

Tonight’s game for Thursday, August 11 should play out in all too familiar fashion for Sparks fans. Our free WNBA picks and predictions for this Sun vs. Sparks grudge match has Connecticut pegged to cover this sizable spread yet again.

Sun are 7-0 ATS in their last 7 games vs. a team with a losing straight up record. Find more WNBA betting trends for Sun vs. Sparks.

Sun vs Sparks picks and predictions

The Sparks season from hell is mercifully almost over, but it isn’t going to have a pretty ending. They just got blown off the court 97-71 by this same Sun team two days ago. Due to travel difficulties, they were forced to sleep in an airport overnight and were still traveling back to L.A. mere hours before tip-off on Tuesday.

The unusual schedule quirk that resulted in the Sun playing the Sparks twice in a row in Los Angeles negates what little homecourt advantage L.A. had. The Sparks played at a rest disadvantage in game one on Tuesday and now face a team that has been settled in L.A. for four days.

The Sparks played like a tired team on Tuesday, coughing up a downright ugly 20 turnovers. Everyone on the Sun have active hands, and simple actions like dribble handoffs between Nneka Ogwumike and Katie Lou Samuelson were blown up before they’d really begun.

The Sun also coughed up 18 turnovers, but the difference is that most of theirs came once the game's competitive portion was over. The Sun got a bit sloppy once the game was out of hand in the second half, so the final score isn’t even indicative of how dominant Connecticut was.

Even against a limited defensive team like the Sparks, these are moments the Sun miss Jasmine Thomas’s ability to organize the offense. Pick-and-roll play, post-entry passing, and decisiveness are all things the Sun can struggle with without their lead guard. A better team might capitalize on these weaknesses, but the Sparks aren’t in Connecticut’s league.

One of the bright spots for the Sparks this season has been the emergence of Brittney “Slim” Sykes in this recent stretch. She’s averaging 18.6 points over her last five games, far above her 11.6 per game average on the season. It seems like, amongst a cast of players whose efforts too often wax and wane, she can be relied upon to bring the competitive edge L.A. desperately needs.

Even that edge is likely muted by the presence of Courtney Williams, in many ways her mirror image on the Sun. Sykes vs. Williams is a truly fun matchup, both bulldog defensive guards who make their opponents feel them on every play. But, it’s still a stretch to find any advantage for L.A. here.

The Sparks are just totally top-heavy. Whenever Nneka Ogumike hits the bench, the entire offense craters. The Sparks are 10 points worse without Ogumike in the game, and without Liz Cambage, they have no true number one option to shoulder the offense in those moments.

The Sun also nearly doubled up the Sparks in total rebounds, 41 to 23. They simply dominated them in every respect. That margin might get even uglier if Chiney Ogwumike’s shoulder holds her out of tonight’s game.

It’s difficult to beat a team twice in a row, particularly on the road, but these Sparks have been miserable at home. Los Angeles is just 1-6 against the spread in its last seven home games.

These are two of the three best teams in the “W” at attacking the paint, but that’s where the similarities end.

The Sun are an elite offense and have top-tier marks in fast break points, points off turnovers, and second-chance points. They’re a defensive playmaking team, terrific offensive rebounders, and have an incredible offensive balance between Alyssa Thomas, Jonquel Jones, and DeWanna Bonner. They’re relentless and demoralizing to play.

It doesn’t matter much that L.A. will struggle to score against the Sun, as we’ve just seen, Connecticut’s offense is more than capable of making up the gap all on its own. Despite holding the Sparks to just 71 points on Tuesday, the total hit 168, well Over tonight’s line.

Both these teams have trended strongly towards the Over this season. The Sparks Over/Under record is 20-14-0, while the Sun’s is a similarly strong 18-15-1. Given L.A.’s defensive struggles and the innumerable ways the Sun can score, this line feels much too low.

It’s rare to see a top team with a record against the spread as strong as the Connecticut Sun have had in this recent stretch. They’re 4-0 ATS in their last four games and 5-0 in their last five games on the road.

As if that wasn't enough, they’re also consistently blowing out the teams they’re supposed to, like the Sparks themselves, and are 7-0 in their last seven games against teams with a straight-up losing record.

Considering some of the lines they’ve had to beat to get that record, that’s damn impressive. They’ve been remarkably consistent, and unlike a less experienced team like the Las Vegas Aces, they don’t play down to the competition.

For me, there’s always some reservation betting a team to cover a spread this big, but the Sun are the exception. They just covered an -8.5 line against the Sparks two days ago by 17.5 points.

They’ve shown their quality in game after game recently, and I expect their rematch with the Sparks tonight will be no different.

Did you know that if you parlayed today’s WNBA Sun vs. Sparks predictions and picks in a single-game parlay, you could win $23.25 on a $10 bet? 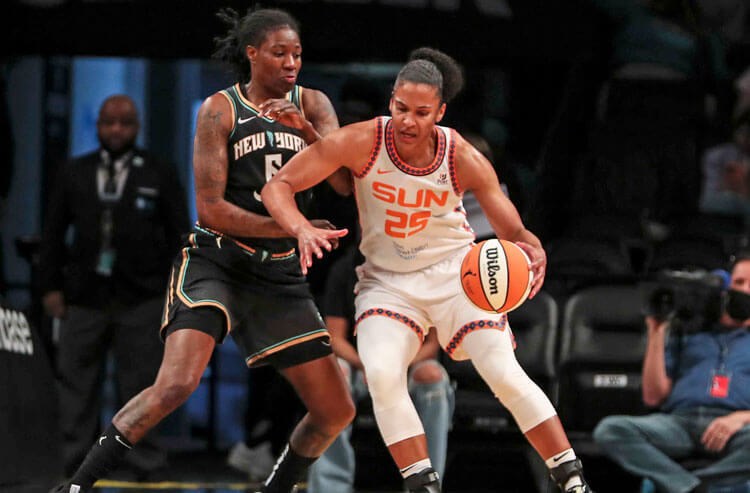