Sky vs Aces Picks and Predictions: LV Knocks Chicago Down Once More

With two of the WNBA's championship contenders going head-to-head, we're expecting an exciting, high-scoring affair. However, our WNBA betting picks suspect that Las Vegas' offense — facilitated by Chelsea Gray — may just be too much for Chicago to handle.

There's nothing better on the basketball court than to watch two healthy championship-level teams face off in a big game before the end of the regular season. That's what's going down tonight when the Chicago Sky face-off with the Las Vegas Aces.

These two teams have been the cream of the crop this season, and this game takes on a heightened level of critical importance as it could determine who ultimately secures the No. 1 overall seed.

Read our WNBA picks and predictions to find out if the Sky can slow down the Aces' potent offense.

The Over is 10-1 in the Sky's last 11 games following an ATS loss. Find more WNBA betting trends for Sky vs. Aces.

Sky vs Aces picks and predictions

The Chicago Sky are coming off a bad 111-100 defeat against the Seattle Storm. They were outmatched most of the game and surrendered 25 points, nine rebounds, and five assists to Breanna Stewart.

The Storm, now 21-13 on the season, looked like the all-around better team, making tonight's matchup much more intriguing. Should the Sky lose yet again to Las Vegas, it will doubt whether they've got the goods to repeat as champions.

These two powerhouses have split the season series, with the latest matchup coming in the WNBA Commissioner's Cup. Las Vegas came out victorious in that duel led by A'ja Wilson, who dominated with a 17-point, 17-rebound, six-block performance.

In many ways, this matchup is a pick'em as both teams have played excellent basketball all season. The Aces are 11-5 on their home court, while the Sky are 11-5 on the road. Las Vegas has a prolific offense that can outgun a team in a hurry. Las Vegas averages 89.9 points while outscoring opponents by 6.1 points per game.

This game will be close, but I will favor the Aces, whose defense has been playing more intensely. In their last ten games, Las Vegas has surrendered 79.5 points per game, and the Sky are giving up 87.5. Las Vegas gets hot, stays hot, and covers the spread.

Picking Las Vegas to get hot, I'm expecting a shootout that could go down to the wire.

While Las Vegas has been playing solid defense of late, the Sky also have one of those offenses that are near impossible to contain, averaging 87.9 points over their last 10 games.

The Aces' offensive reputation needs no introduction. They lead the league in points per game (89.9) and 3-point percentage (35.8%).

One critical component is the recent injury to forward Dearica Hamby, who suffered a right knee bone contusion during Tuesday's 97-90 win against the Atlanta Dream. Hamby averaging 9.3 points and 7.1 rebounds is a significant loss that could have an impact in the long run, although I'd bank on Kiah Stokes and Theresa Plaisance being able to step up to the plate in the short term.

Kelsey Plum has been one of the most formidable players in the entire WNBA this season. In her most recent matchup against the Sky, she torched them for 24 points. For the season, she's averaging 19.9 points.

When considering both teams' offensive ceilings, you have to lean towards the Over here.

The Sky currently surrender the third most assists per game to opponents (21.1). That could spell trouble for Chicago facing off with a team like the Aces that are second overall in pace (81.1) and Top 5 in assists per game (20.7).

I believe Chelsea Gray is in play for a big night in that department. For the season, she's averaging 6.1 assists per game, the fifth-best mark in the WNBA.

Currently, the Over/Under on assists have Gray at 6.5. She's successfully dished out seven or more assists in 12 games this season. Take the Over here.

Did you know that if you parlayed today’s WNBA Sky vs. Aces predictions and picks in a single-game parlay, you could win $52.48 on a $10 bet? 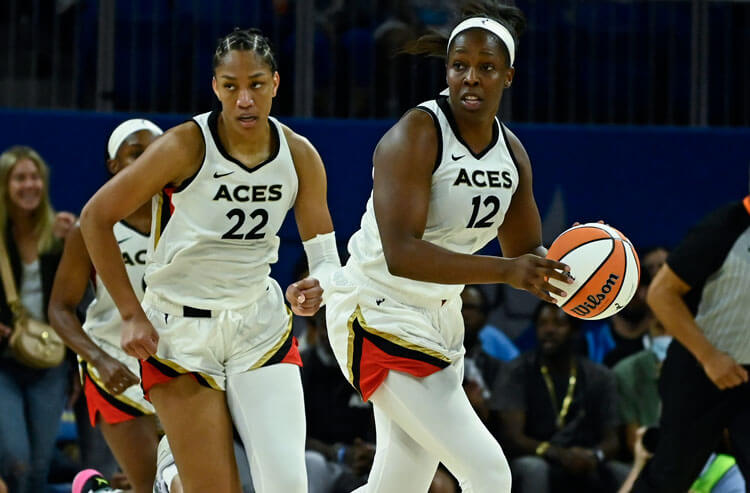 Sky vs Aces Picks and Predictions: LV Knocks Chicago Down Once More
Provided by