Storm vs Sparks Picks and Predictions: Seattle Flightless Without Bird

Seattle will have the weather tonight's matchup without Sue Bird, and against surging L.A., it will struggle to fill the void. Find out why our Storm vs. Sparks WNBA betting picks see the home dogs keeping this one close.

The Seattle Storm will do their best to stave off the surging Los Angeles Sparks on Thursday, July 6. With Breanna Stewart and Nneka Ogwumike both playing incredible basketball recently, Storm vs. Sparks should feature some of the best one-on-one play in the W.

Read on for our free WNBA picks and predictions to see why we like the Sparks’ chances against the Storm without Sue Bird on Thursday, July 7.

Odds via bet365. Compare WNBA odds before betting to ensure you get the best number.

Storm vs Sparks picks and predictions

Sue Bird announced earlier this year that she will be hanging it up after 20 seasons in the WNBA, and the Seattle Storm will be getting a brief look into what a future without her might look like as she’s set to miss Thursday's game for personal reasons. Bird isn’t as dynamic an on-ball threat as she once was, but she’s still a sound team defender and she sets the table for everyone else on offense while remaining a strong catch and shoot threat from deep. It’s difficult to replicate all of those traits in a single player.

The Storm have a solid record at 14-8 given all the absences they’ve had to deal with already, but recent encouraging wins against the Sun and the Aces have to be balanced against a desultory loss to the Dream where they were blown out in the first quarter.

The Sparks, on the other hand, are just 10-11 but are winners of three in a row and four of their last five. This has been by far the most successful stretch of their star-crossed season, and it seems like the on-court chemistry has finally begun to stabilize. The Sparks won the last meeting between these two teams on June 25 in Seattle, 85-77.

In that game, Breanna Stewart and Nneka Ogwumike demonstrated why they’re both on the WNBA MVP odds board. Stewart had 28 points, seven boards, and five assists. Ogwumike had 24 points, four boards, and three assists - and most importantly the win. I’d predict a similar shootout tonight from the two star forwards.

Jewell Loyd is the other player to watch from the Storm, particularly in the absence of Bird. She’s capable of strong scoring outbursts and has had 20 or more points in four of her last 10 games, but has just as frequently had inexplicable duds.

With Bird sidelined and Los Angeles having home court, I like the Sparks to cover.

Seattle is one of the weaker offensive teams in the W, and missing Bird should only further drop their 98.2 rating. Without Bird, they’re even more singularly reliant on Breanna Stewart. Stewie is a dominant and dynamic scorer, but the Sparks have one of the better rotations to handle her unique combination of size and scoring prowess.

The Sparks have been emphasizing transition more recently and have seen their pace rise to fourth in the WNBA, something that should favor the Over. With Bird out of the lineup, it’s possible Seattle emphasizes transition more too, as they’ll both be replacing her with a younger, faster player but also will know they won’t be able to depend on Bird to manufacture efficient halfcourt offense. But if that was easy to do, they’d be doing it already, and I don’t see how losing Bird does anything but lower the expected total.

The Storm thrives off creating live-ball turnovers, but that’s more effective against perimeter-oriented teams, teams with only one ball-dominant scorer, and teams that emphasize ball movement. The Sparks don’t fall into any of those categories, which is why I like the Under at this number.

The Sparks have found something lately. Their season started about as poorly as possible, but interim head coach Fred Williams has this squad competing and playing for each other at a high level. They’ve built an identity as an inside-out offensive team around Liz Cambage and Ogwumike, and it’s working for them. They lead the league in points in the paint (40.2) and limit opponents to the fourth-fewest.

The Sparks are 5-0 ATS in their last five games overall and are building real momentum ahead of the All-Star game. With Bird out, I like L.A. to cover.

Did you know that if you parlayed today’s WNBA Storm vs. Sparks predictions and picks in a single-game parlay, you could win $26.45 on a $10 bet? 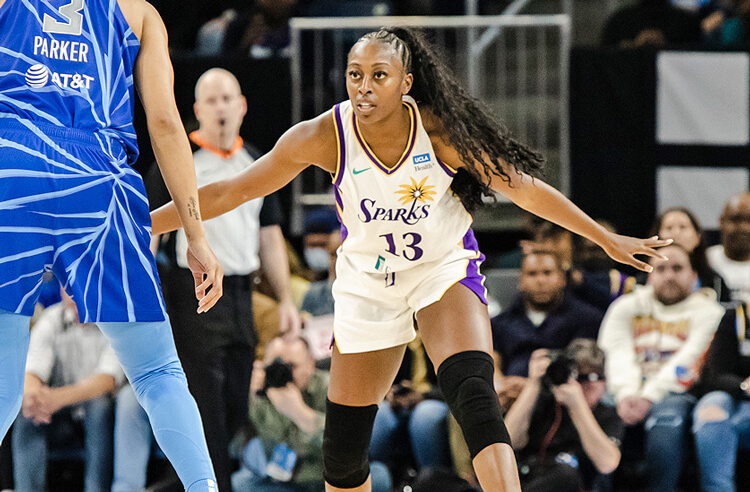 Storm vs Sparks Picks and Predictions: Seattle Flightless Without Bird
Provided by