UFC 262 Ferguson vs Dariush Picks: Does Ferguson Have Anything Left?

Tony Ferguson, No. 5 in the lightweight rankings, has lost his last two fights in ugly fashion. He was dominated on the ground by Charles Oliveira in December and lost to Justin Gaethje before that.

Tony Ferguson vs. Beneil Dariush is the co-main event for UFC 262 betting on May 15 at the Toyota Center in Houston, Texas.

This should be a terrific tilt between a pair of entertaining fighters with plenty to prove. Tony "El Cucuy" Ferguson will look to demonstrate that his best days aren't behind him while Dariush tries to stake his own claim as a legitimate lightweight contender.

UFC betting lines have Dariush as a -162 favorite while Ferguson comes back at +134.

Here are our best free Ferguson vs. Dariush picks and predictions for UFC 262 on Saturday, May 15.

Ferguson is currently No. 5 in the lightweight rankings, despite losing his last two fights in ugly fashion. He's coming off a decision loss in December where he was dominated on the ground by Charles Oliveira and he lost his previous fight before that to Justin Gaethje, who pummeled Ferguson for five rounds to win via TKO.

Prior to his two-fight skid, El Cucuy had won 12 consecutive UFC bouts, with nine of those victories coming by finish.

Ferguson is one of the most entertaining fighters around, combining unpredictable striking with incredible pace and high-level submissions.

Dariush enters UFC 262 as the No. 9-ranked lightweight and is fresh off a split-decision victory over Carlos Diego Ferreira in February. He has won six straight fights in the octagon while earning four Fight of the Night or Performance of the Night bonuses during that span.

Dariush has a background as a world champion BJJ practitioner but has vastly improved his Muay Thai over the years. The 32-year-old is a well-rounded fighter who can get it done wherever the fight goes.

Ferguson vs Dariush tale of the tape

PREDICTION: Dariush to win -162 - The big question for Ferguson is whether the 37-year-old has taken too much damage over his last two fights and is headed for a steep decline. The problem isn't simply that he lost to Top-3 lightweights like Gaethje and Oliveira, it's how badly he lost.

Dariush might be regarded as an up-and-comer but he's far from green, boasting a 14-4-1 record in the UFC. While he hasn't faced the elite opponents that Ferguson has, all you can do is beat the foes in front of you, and he has been doing that in spectacular fashion with highlight-reel knockouts and submissions.

Don't forget that Oliveira withdrew from a scheduled fight against Dariush in the fall and that Ferreira was a Top-15 lightweight riding a six-fight winning streak before his loss to Dariush. Dariush also had a controversial split-decision win against Michael Johnson (when he was ranked No. 5 in the division) back in 2015, so it's not like he's been facing scrubs.

Dariush can get a bit wild in his striking at times, but the same can be said for Ferguson, and El Cucuy has looked much slower over his last few bouts.

Expect Dariush's grappling and leg kicks to wear on Ferguson in the early going before his big overhand punches start to land after Ferguson opens up in the striking exchanges. 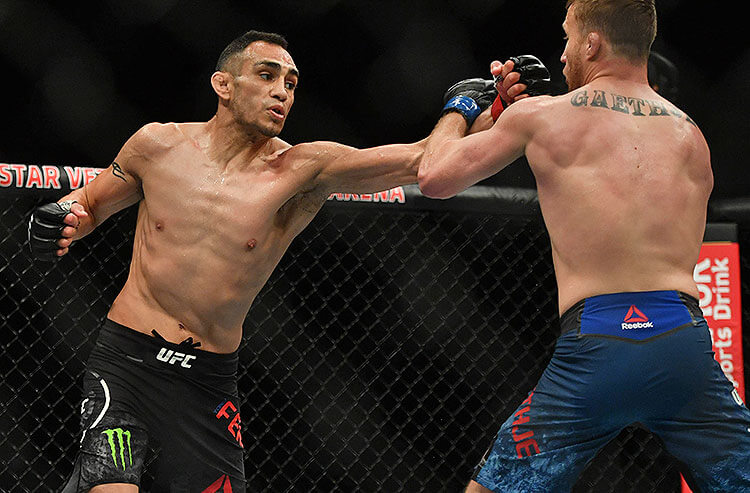 UFC 262 Ferguson vs Dariush Picks: Does Ferguson Have Anything Left?
Provided by

UFC 266 Andrade vs Calvillo Picks: Here For a Good Time, Also a Long Time
Rohit Ponnaiya | Jan 1, 0001
About Us
Contact Us
Careers
Our Team
Brand
Testimonials