UFC 262 Chookagian vs Araújo Picks: Back the Well-Rounded Dog

Viviane Araújo is 4-1 since making her UFC debut in 2019, but the No. 7-ranked flyweight contender is a +116 underdog against Katlyn Chookagian at UFC 262.

Katlyn Chookagian vs. Viviane Araújo is on the main card for UFC 262 betting on May 15 at the Toyota Center in Houston, Texas.

This could serve as a stepping stone to a women's flyweight title shot for both fighters, with Chookagian looking for her second shot at incumbent champ Valentina Shevchenko.

UFC betting lines have Chookagian as a slim -142 favorite while Araújo comes back at +116.

Here are our best free Chookagian vs. Araújo picks and predictions for UFC 262 on Saturday, May 15.

Chookagian is the No. 2 contender in the flyweight division and is fresh off a unanimous decision win over Cynthia Calvillo in November. She is 4-2 in her last six fights with her defeats in that span coming against the two highest-ranked fighters in the division in Valentina Shevchenko and Jessica Andrade.

Chookagian's nickname is "Blonde Fighter" but maybe it should be "points fighter." Chookagian is a long, high-volume striker with excellent cardio, but doesn't have a single finish in eight career UFC wins.

Viviane Araújo is the No. 7-ranked flyweight and in her last outing in January, dominated Roxanne Modafferi in a decision victory. She is 4-1 since making her UFC debut in 2019 and was previously the Pancrase strawweight champion.

The 34-year-old Brazilian is a well-rounded fighter that is comfortable both on the mat and on her feet, where she lands 4.97 significant strikes per minute.

Chookagian vs Araújo tale of the tape

PREDICTION: Araújo to win +116 - Araújo's only loss in the octagon came against Jessica "Evil" Eye, who actually defeated Chookagian just one year earlier.

Araújo looked very impressive in her last two fights and while Chookagian has a five-inch height advantage, they are actually even when it comes to reach.

Chookagian will try to keep this fight at range with her kicks but Araújo has excellent movement and boxing ability and is also the more accurate striker. The Brazilian is also much the superior grappler, averaging 2.33 takedowns per 15 minutes and Chookagian has a takedown defense of just 51 percent.

Look for Araújo's well-rounded skill-set to translate to a victory over the one-dimensional Chookagian. 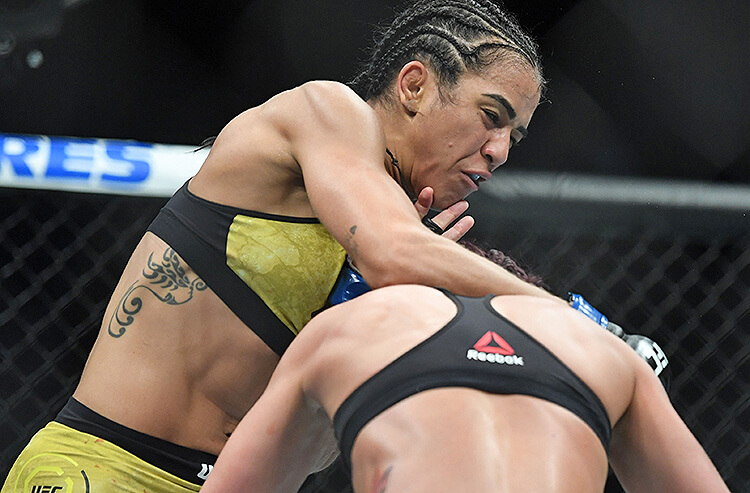 UFC 262 Chookagian vs Araújo Picks: Back the Well-Rounded Dog
Provided by

UFC 266 Andrade vs Calvillo Picks: Here For a Good Time, Also a Long Time
Rohit Ponnaiya | Jan 1, 0001
About Us
Contact Us
Careers
Our Team
Brand
Testimonials