Charles Oliveira opened as the -138 favorite over Michael Chandler in a bout for the vacant lightweight at the main event of UFC 262.

UFC 262 odds are on the board for an exciting fight card on May 15 that will see a new UFC lightweight champion crowned.

The card is headlined by a fight between Charles Oliveira and Michael Chandler for the vacant lightweight championship belt. UFC odds have Oliveira a -145 favorite, while Chandler comes back at +125.

This should be a very competitive card, with the biggest favorite installed at a modest -200. Here are the UFC betting odds for the main event and every other fight at UFC 262: Oliveira vs Chandler.

UPDATE 10 P.M. ET FRIDAY: William Hill US pegged Charles Oliveira a -120 favorite and Michael Chandler an even-money underdog when this lightweight title bout first went up on April 30. Earlier Friday, Oliveira was up to +135, but on Friday night, 24 hours before the five-bout main card begins, the moneyline is Oliveira -130/Chandler +110. That said, Chandler is taking the bulk of tickets and money, at 54 percent and 67 percent, respectively. Among the wagers on Chandler is a $4,800 play at +105 that would win about $5,000. For the moment, that's the largest wager on the UFC 262 card.

UPDATE MIDNIGHT ET WEDNESDAY: Nick Kalikas, MMA oddsmaker and risk manager for Circa Sports, opened this title about at Charles Oliveira -130/Michael Chandler +110 on March 23, and tonight, the moneyline is in the exact same spot. "Crazy good fight here for the vacant UFC lightweight title, between two of the most exciting lightweights in the sport," Kalikas said. "Both gentleman are receiving respect at the betting window, and it's been a steady flow of two-way action from our bettors thus far. I expect this trend to continue throughout the week and even on fight day, as I think we'll see most of our sharper bettors split on this one the entire way. Regardless of who wins or loses, this fight should deliver. I'm expecting an exciting finish along the way, and I highly doubt we hit the scorecards."

UPDATE 6:30 P.M. ET SATURDAY: FanDuel has Beneil Dariush at -168 to Tony Ferguson's +142 in tonight's co-main event, a lightweight clash. That moneyline is drawing two-way action with a lean toward the underdog. as Ferguson is landing 57 percent of tickets and 56 percent of money.

UPDATE 10 P.M. ET FRIDAY: Beneil Dariush first went up at -145 and is now out to -160 at William Hill US, with Tony Ferguson +140 in the co-main event. Bettors have been attracted to Ferguson at plus money, with ticket count and money both in the 2/1 range on the underdog.

UPDATE MIDNIGHT ET WEDNESDAY: Beneil Dariush opened -160 to Tony Ferguson's +140 at Circa Sports, and almost two months later, Dariush is up slightly to -170, with Ferguson +150. "I think this line might be a surprise to some of the bigger die-hard fans. Tony Ferguson hasn't been an underdog since his matchup with Rafael dos Anjos in late 2016," Kalikas said. "Early on, it was all 'dog action taking the plus money, causing the price to drop some on Dariush. As we inch closer to fight day, some of our sharper bettors are taking advantage of the market drop and are willing to lay the slight chalk on Dariush, which in turn has caused another line shift, but this time it's going his way. Very important fight for both gentleman. Ferguson is looking to stay relevant and prove he still belongs competing at the highest level in this sport, and for Dariush, a win over Ferguson launches him into a potential title fight soon."

UPDATE 6:30 P.M. ET SATURDAY: Katlyn Chookagian is currently a -136 favorite, with Viviane Araujo +116 on the buyback at FanDuel. Ticket count and money are both running about 2/1 on the favorite for this women's flyweight bout.

UPDATE 10 P.M. ET FRIDAY: Katlyn Chookagian is -140 chalk to Viviane Araujo's +120 underdog price at William Hill US. It's two-way action for this women's flyweight bout, with 56 percent of bets on Chookagian and 60 percent of dollars on Araujo.

UPDATE 7 P.M. ET THURSDAY: This women's flyweight bout went up at Katlyn Chookagian -150/Viviane Araujo +130 on April 27, and it's now at Chookagian -140/Araujo +120 at Circa. "An important fight for the women's flyweight division," Circa Sports' Kalikas said. "Most of our action has been on the underdog Araujo, with about 70 percent of our ticket count and bigger bets coming in her way. This should be a fairly competitive fight, and I'm expecting the action to even out more by fight day."

UPDATE 9:30 P.M. ET SATURDAY: The same BetMGM player who fired on Katlyn Chookagian also put $50,000 on Edson Barboza at +130, which is his current price against -155 favorite Shane Burgos. "Tickets are pretty close, a few more on Barboza, and money is 4/1 on Barboza," BetMGM Nevada's Scott Shelton said.

UPDATE 6:30 P.M. ET SATURDAY: This featherweight matchup has Shane Burgos a -152 chalk at FanDuel, with Edson Barboza a +128 underdog. The favorite Burgos is taking the bulk of tickets and money, at 56 percent and 64 percent, respectively.

UPDATE 10 P.M. ET FRIDAY: Shane Burgos is a -150 favorite and Edson Barboza a +130 pup at William Hill US, where ticket count is close, but money is not. Burgos is taking a modest majority of bets at 53 percent and a much larger share of cash at 86 percent.

UPDATE MIDNIGHT ET WEDNESDAY: Shane Burgos opened a -125 chalk on April 27 and is out to -140 at Circa Sports, with Edson Barboza a +120 underdog. "Fireworks expected between these two high-powered featherweight strikers, and this one should deliver," Kalikas said. "We've seen a decent amount of two-way action early on, with both public and sharps mixed in. As we get closer to fight day, we're starting to see a bit more sharp action siding with Burgos, causing the line to shift his way. This is a huge opportunity for Burgos to pick up one of the biggest and best wins of his career, and solidify his spot as a true contender."

UPDATE 9:30 P.M. ET SATURDAY: In the first matchup on the five-bout main card, Matt Schnell is -170 chalk against +140 'dog Rogerio Bontorin. And again, the big player at BetMGM Nevada weighed in, putting $50,000 on Schnell -170. "The book needs the 'dog," BetMGM Nevada's Scott Shelton said. "Tickets are almost dead even, but there's not much money on the underdog at all."

UPDATE 10 P.M. ET FRIDAY: As is the case at other books, the Andrea Lee vs. Antonina Shevchenko women's flyweight bout has seen huge movement at William Hill US. The fight opened at Shevchenko -185/Lee +165, and Shevchenko is all the way down to -125, with Lee +105 on the buyback. That said, this matchup is now seeing two-way play, with 57 percent of tickets on Shevchenko and 54 percent of money on Lee.

UPDATE MIDNIGHT ET WEDNESDAY: Kalikas pointed to As is the case at other books a women's flyweight bout on the prelims card: Andrea Lee vs. Antonina Shevchenko. Circa Sports opened this fight April 27 at Shevchenko -200/Lee +175, and it's down to Shevchenko -132/Lee +112. "Our biggest shift in terms of line movement for this card," Kalikas said. "Sharp and public action in agreement, coming in strong on the underdog price for Lee, expecting a very competitive fight. Lee represents about 85 percent of our current ticket count, and the majority of the money wagered is on her, as well. I think it's safe to say we'll be pulling for a Shevchenko victory on fight night."

Where will UFC 262 take place?

UFC 262 will take place at the Toyota Center in Houston, Texas. This will be the first UFC event held outside of Vegas, Florida, or Abu Dhabi since the start of the COVID-19 pandemic.

Besides the main event of Oliveira vs. Chandler, this card is loaded with tons of great fighters. Tony Ferguson vs. Beneil Dariush will take place as the co-main event as both lightweights look to earn a future title shot.

Middleweight contenders Jack Hermansson and Edmen Shahbazyan face off as they try to bounce back from losses, while Katlyn Chookagian and Viviane Araújo will clash in a battle between two highly-ranked women's flyweights. There will also be a banger between featherweights Shane Burgos and Edson Barboza.

UFC 262 odds for the main and co-main events

Dana White finally seems to have accepted the retirement of former lightweight champ Khabib Nurmagomedov and is putting the 155-pound belt on the line at this event. With Dustin Poirier seeking another big payday with a trilogy fight versus Conor McGregor, Charles "Do Bronx" Oliveira and Michael Chandler have emerged as the pair that will battle for the vacant lightweight title.

Oliveira comes into this fight as a -130 favorite and is riding an eight-fight winning streak. The 31-year-old is fresh off a dominating decision win over Tony Ferguson in December and his previous 10 UFC wins all came by stoppage. With an extensive background in BJJ, Oliveira is one of the best grapplers in the world and holds the UFC record for wins by submission with 14.

Chandler made his highly anticipated UFC debut in spectacular fashion in January, knocking out the No. 6-ranked lightweight Dan Hooker in the first round. Chandler was a three-time lightweight champ at Bellator and holds Bellator records for the most wins and title bouts. The 34-year-old is a very well-rounded fighter who combines excellent wrestling with knockout power and a high-pressure style. 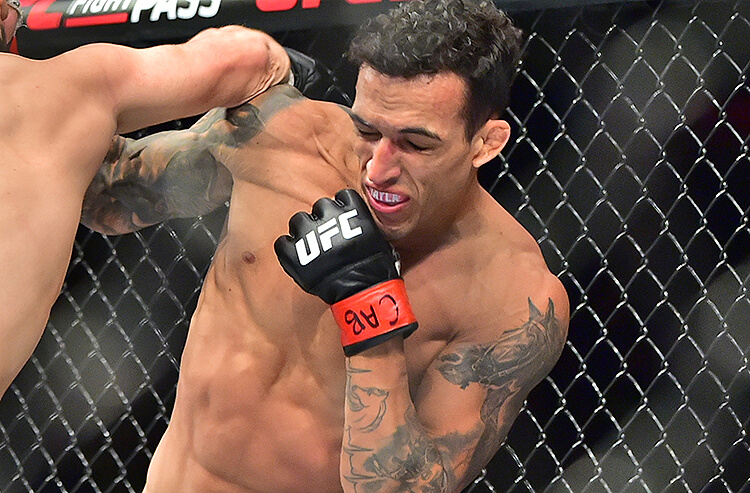 UFC 262 Betting Odds: Oliveira vs Chandler Headlines May 15
Provided by