Iran vs USA World Cup Picks and Predictions: All or Nothing for the Americans

The United States need a win and three critical points to advance through to the Round of 16, but with so much at stake, their final Group B match against Iran projects to be tight and cagey. Find out the best bet in our World Cup betting picks below. 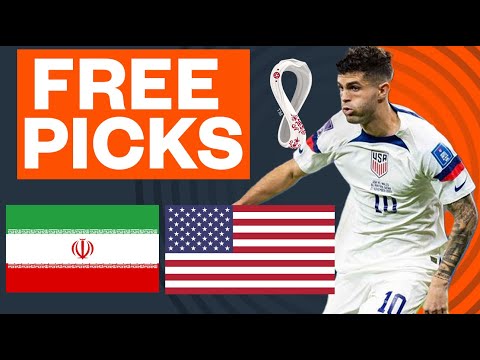 Two teams with differing needs will battle on Tuesday to determine who reaches the knockout stages of the 2022 World Cup, as Group B teams Iran and the United States square off.

Iran could advance with a draw and an England win or draw, but only a victory ensures their place in the Round of 16 beyond all certainty. As for the United States, it’s more simple: win, or go home. Any result short of claiming all three points will see the Americans bounced from the tournament.

Given the stakes for both teams, it should be a cagey match with plenty of action. Find out how that will make it easier for you to make money on the day with our World Cup picks and predictions for Iran vs. USA below.

Iran vs USA picks and predictions

The United States could feel a bit aggrieved that they walked away with just a point from their match with England.

After a draw with Wales that felt deserved in the end, the Americans had the majority of the chances against the Three Lions on Friday and came closest to scoring with Christian Pulisic striking the crossbar. However, they will also feel relieved that Harry Kane did not steal the points at the death, putting his header wide of the post.

The point puts the United States in control of their own destiny, and they will need to find a way to score goals against an Iranian side that kept a clean sheet against Wales. Many fans expected dynamic playmaker Gio Reyna to start against England and were frustrated that he only made a brief cameo of about 10 minutes.

Some pundits even questioned whether manager Gregg Berhalter was being forthright with the real health status of the Dortmund player. Given many of America’s most important players have played every minute so far, it’s an important question.

The fitness of Sardar Azmoun will be a major question for Iran, as the striker returned on Friday from a calf injury to play for nearly 70 minutes. He was visibly fighting through pain after being fouled multiple times, and he is doubtful for the match on Tuesday.

That could be a real issue for Iran, given how much the attack struggled against England. Mehdi Taremi often cut a lone figure without Azmoun alongside him, and even against Wales they had chances but it took until late for them to break down the Welsh — who were a man down at that juncture.

He and Yunus Musah were instrumental in disrupting the British midfield and funneling all the danger into wide areas. I expect the same to happen on Tuesday. Iran will find it difficult to generate attacks with the United States controlling the midfield.

On the other end, I’m still not sure how much I trust the Americans to score goals. Iran know a draw is most likely enough to see them through, as the World Cup odds of Wales winning against England are low — especially with the British needing a win to ensure they finish atop the group. I expect Wales to bunker down and dare the United States to find a way through.

I could see this match playing out in a variety of ways, none of which I’m comfortable enough with to bet on. The one scenario I keep coming back to again and again is that only one of these two teams — if either at all — is going to find the back of the net.

Either we see a scoreless draw or we see a win with just one team scoring. Take both teams to not find the back of the net as your best bet for what should be a truly cagey affair.

A) Get a 33% profit boost on any USA vs. Iran same-game parlay at DraftKings! Bet Now

Iran vs USA side analysis

Aside from their 6-2 defeat to England, Iran have done well of late. They’ve won three of their last five, including victories over Uruguay and a draw with Senegal leading up to the tournament. However, Iran will continue to be without starting keeper Ali Jahanbakhsh, who remains in concussion protocol following an injury against England.

As for the United States, they’ve not tasted victory in a while. They’ve drawn four of their last five — with a defeat to Japan mixed in — and haven’t won any of their last five matches against World Cup 2022 participants. It remains to be seen how much rotation Berhalter will employ, perhaps bringing Brenden Aaronson into the starting XI for Timothy Weah.

The United States are decided favorites in this match, given their talent advantage and the public backing. The price for the draw is slightly ahead of the price for an Iranian victory, but both pay handsomely for those brave enough to back them.

Those looking at the totals market will find the Under 2.5 to feature a fair amount of juice. That’s because aside from the 6-2 loss to England, the remainder of Iran’s last five matches have seen two or fewer goals scored. That mark has also not been eclipsed in eight of their last 10 matches overall.

The United States have seen just 11 goals scored over their last seven matches, with five of those taking place in a win over lowly Grenada. They’ve scored just one goal in their last four matches against World Cup 2022 opponents while conceding only three in that span. There have been just two total goals scored in their last three matches.

The half market could be of interest to some, given that of the 17 goals scored in Iran’s last six matches, only five have come before halftime — and three of those were in the England match. On the other side, the United States have seen just four goals in the opening 45 minutes of their last seven outings. 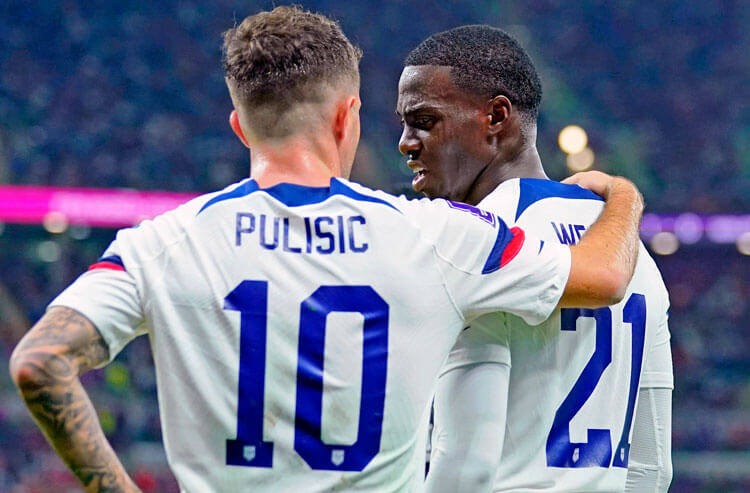 Iran vs USA World Cup Picks and Predictions: All or Nothing for the Americans
Provided by