Could Group B be the real Group of Death in the 2022 World Cup with England, the United States, Wales, and Iran duking it out? England are the favorites to win this group, but they struggled in the Nations League. Can Harry Kane & Co. rebound? 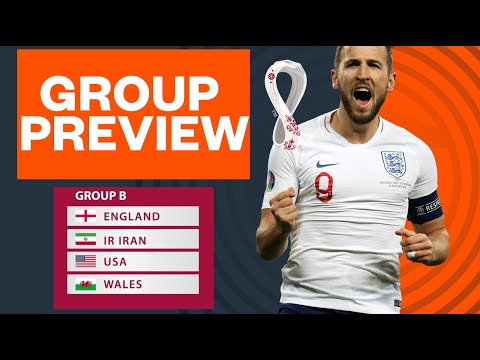 While it’s not been given the “Group of Death” moniker that one group has in every major soccer tournament, one could argue that Group B is the toughest of all eight groups in the 2022 World Cup in Qatar. The average FIFA world ranking for the four participants is the highest of any group, with all four teams ranked inside the Top 20 in the most recent ranking. They’re all ranked inside the Top 24 teams in the Elo rankings, as well.

England are strong favorites to win the group, according to World Cup odds, but who joins them? A case could be made for — and against — every team in the group. And can England overcome their issues to actually win the group, or could an underdog pip them to the top?

Find out in our World Cup picks, predictions, and betting preview for Group B.

Just 16 months ago, England were a few spot kicks away from bringing football home. Instead, they lost to Italy in the Euro 2020 final and it’s been rocky ever since. While they easily qualified from their group for the World Cup, they were a mess in this summer’s Nations League as they were relegated from the top tier after failing to win any of their six group matches — including two defeats to Hungary in which they were outscored 5-0.

The Three Lions saw goals dry up during the competition, as they found the back of the net just four times — all in their two matches against Germany. Manager Gareth Southgate has been criticized by England fans and media for playing three central defenders, but he’s continued to stick with the system that will see Harry Maguire, John Stones, and whoever else Southgate rolls with typically deployed at the back in a 3-4-3 setup.

Harry Kane is the talisman and one of the Golden Boot favorites, and he’ll be supported by Raheem Sterling and the in-form Phil Foden. However, England have lost multiple key players to injury, including fullbacks Reece James and Ben Chilwell, and it could limit how often they’re able to get the ball to Kane.

England have the talent to win the group, but they must stay healthy. If Southgate can get the tactics right, they’re a threat to repeat their semifinal run from the 2018 World Cup. But that’s a big “if” right now, and it wouldn’t shock me to see them crash and burn out of the group stage.

Player to watch: Harry Maguire. Southgate is hitching his defensive wagon to Maguire, which is fitting given the Manchester United center-back turns slower than an ox. While stars like Kane, Foden, and Sterling will get the spotlight, England’s hopes rest on whether Maguire can recapture his form from last year — or if he continues to be their biggest liability.

The United States' chances in this tournament begin and end with what Gregg Berhalter can get from his strikers, and right now there’s no clear-cut favorite as to who should start. In their two friendlies in September, the USMNT managed just two total shots on goal against fellow World Cup sides Saudi Arabia and Japan. To truly explain their dilemma, they haven’t scored a goal in their last three matches, and haven’t had a non-penalty goal from a striker in their last five.

There are also questions on defense. The loss of Miles Robinson earlier this year ended a budding partnership between him and Walker Zimmerman. Now, Berhalter must decide whether to stick with Aaron Long — who is in poor form — or go with Fulham’s Tim Ream at the back of a 4-3-3 formation.

Luckily for Berhalter, he will have most of his stars healthy for the tournament. Gio Reyna is fit for the first time in what feels like forever, and Weston McKennie appears ready just in time for the tournament. We could see Reyna, McKennie, midfielder Tyler Adams, and winger Christian Pulisic playing together, which is a rare sight indeed. The United States will also be boosted by the current form of Brenden Aaronson, whose energy could be an X-factor for the side.

If Berhalter can find someone to score goals and a central defensive partnership that prevents them, they will have a great shot to reach the Round of 16. But for the third-youngest team in the tournament, there could be some growing pains if a forward doesn’t step up.

Player to watch: Gio Reyna. The son of American legend Claudio Reyna, the 20-year-old attacking midfielder gives the side a true playmaker on the ball. If he can stay healthy, he provides the side with a creative spark that few on the roster can emulate, with an ability to both find goals while also setting them up.

Welsh fans have waited 68 years to be back in the World Cup, and their players are hoping to make the wait worth it. Many people are familiar with the big stars such as Gareth Bale, but Wales are a talented side with proven players at nearly every position.

That said, they haven’t looked great after securing their place in the tournament via a playoff win against Ukraine, having lost four of their last five matches in the Nations League. Granted, those matches came against the Dutch, Belgium, and Poland, but it leaves many questions to be answered.

Wales love to absorb pressure and hit on the counter-attack, utilizing the pace of players like Fulham's Daniel James and Nottingham Forest's Brennan Johnson. Bale will typically be deployed at striker in a 3-4-2-1 formation preferred by manager Rob Page.

One concern for Wales is in goal. First-choice keeper Wayne Hennessey has played just one match for Nottingham Forest since August, this past week in the EFL Cup. Rust could be an issue for him, as he made just two saves. The other worry is whether midfielder Joe Allen can be ready to go ahead of their first match against the United States, although Spezia midfielder Ethan Ampadu will likely partner with veteran Aaron Ramsey in the interim.

Player to watch: Gareth Bale. As he proved in MLS Cup, he doesn’t need many touches or the speed he once had to make his mark on the match. Bale is a proven winner who steps up in the biggest moments, and it was his goal against Ukraine that ended Wales' World Cup drought.

While there’s been a push by some nations to have them removed from the tournament due to their stance in the Russia/Ukraine situation, Iran are expected to be in the tournament when it begins. Carlos Queiroz’s side is built to frustrate opponents by defending en masse.

And defend they do. Iran have scored exactly one goal in each of their last four fixtures while allowing just three total. Their 4-1-4-1 setup is one that Queiroz has deployed in the past with Brazil and Russia, and it’s both extremely boring and stunningly effective.

Once they get the ball off their opponents, they launch it forward with hopes of finding a goal via “route one” to forwards Alireza Jahanbakhsh, Mehdi Taremi, and Sardar Azmoun. Azmoun’s fitness is of concern heading into the tournament, with the Bayer Leverkusen forward just getting healthy in time to board the plane to Qatar.

While the competition hasn’t been the toughest, one of those matches was a 1-1 draw with AFCON champions Senegal. That said, they’re ranked 20th in the FIFA rankings for a reason, and any nation in this group that overlooks them does so at their own peril. Their first opponent is England, and if they’re able to stifle the Three Lions, it could be the precursor to a whole lot of chaos in the group.

Player to watch: Sardar Azmoun. The “Iranian Messi” has 41 goals in 65 matches for his nation, and if he’s fit, then he provides them with an outlet that can terrorize defenders on the counter. The other reason to watch him is the fact he spoke out in October against the Iranian government via Instagram, and many wonder how he will be received in Qatar.

It’s not that Iran are a bad team, but rather that they struggle to score more than any team in the group. Their total goal line for the tournament is just 2.5 and the Under is heavily favored on all markets. In the 2018 World Cup, they scored just two goals on their way to four points, including a draw with Portugal.

The difference this time is there is no minnow for them to steal three points from, as they did against Morocco in that tournament. While their defensive shape is likely to cause problems and could get them a draw or two, their tournament sets up poorly with England to start, followed by a Wales side who will need to win, and an American side that could be desperate to do so.

Iran have participated in five World Cups, and have failed to qualify from the group stage in each one. It would take a total collapse from either Wales or the United States for them to not finish bottom of the group, and I simply don’t see them beating either with how they play.