Group H looks set to be contested between Portugal and Uruguay, with South Korea and Ghana rounding out the quartet. Our Group H betting preview breaks down the teams and delivers a best bet ahead of the World Cup. 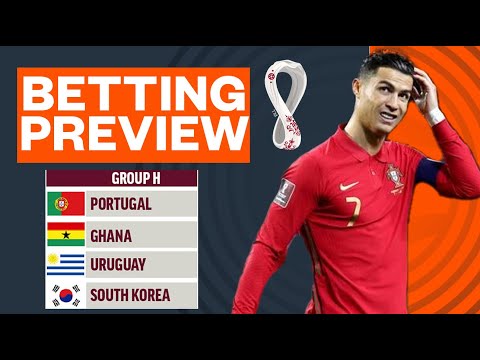 Whisper it quietly but Group H could be the most exciting group at the 2022 World Cup. You’ve got Portugal — the favorite, as far as World Cup odds are concerned — with Cristiano Ronaldo looking to win the one major title that has eluded him.

You also have South Korea, led by Tottenham’s Heung-Min Son, who’ll be playing in a facemask to protect his broken eye socket.

Then you have Uruguay and Ghana, meeting once again, 12 years on from when Luis Suarez robbed Ghana of a spot in the World Cup semifinal. The Africans will be desperate for revenge, not least on Suarez, who is in the Uruguayan squad. Will they be able to stop the likes of Suarez, Darwin Nunez, and Edinson Cavani from scoring?

Each team has talent and players known across the globe but we break down each team and deliver a Group H best bet in our betting preview, and check out our World Cup picks page for more.

By now, we know what Portugal are about and what to expect from them. Portugal have a team packed with world-class talents who are known by every soccer fan on the planet. They’re a team who are technically as gifted as any other team in the World Cup and will have high hopes coming into the tournament.

With Bruno Fernandes and Bernardo Silva, they have two incredibly creative midfielders who should be able to supply chances for Portugal’s forwards. Joao Felix will be Ronaldo’s deputy with Diogo Jota out injured, and they can also call on Andre Silva and Rafael Leao, with the AC Milan forward a potential breakout candidate if he gets much time on the pitch.

Portugal’s biggest danger is that they get in their own way. We’ve grown tired of debate around Ronaldo and how at 37 he might not be a benefit to most modern attacking teams, but with centerback Pepe at age 39, there are concerns that this team might be too old and need to focus more on their great young players.

Player to watch: Cristiano Ronaldo. Hated, adored but never ignored. On the eve of this World Cup, he’s created controversy and question marks over his Manchester United future but he’s still going to be the most influential player for Portugal, whether that is for the better or the worse.

Uruguay aren’t blessed with great depth but the starting lineup is very talented and in attack, they could be devastating.

Luis Suarez and Edinson Cavani are past their best but they’re experienced and have still been performing at a good level, despite their age. On the younger side is Darwin Nunez, who is a great long-shot bet to win the Golden Boot.

Then you have the likes of Federico Valverde and Rodrigo Bentancur, who both have experience at some of Europe’s biggest teams.

One word that has summed up Uruguay in past World Cups has been streetwise, and this team still very much have their street smarts. They are adept in the dark arts, not afraid to push the boundaries of the game’s laws, and know how to grind out wins.

Their main weakness is at the back, Diego Godin has had a brilliant career but he’s now old and no longer has the legs that he used to. Ronald Araujo has been rushed back from injury and it’s hard to know exactly when the 23-year-old will be back to match sharpness.

Player to watch: Darwin Nunez plays for one of the world’s most famous clubs but the Liverpool striker still feels like he’s the wildcard in this Uruguay team. Darwin plays with chaotic energy, he’s quick, direct, and loves to shoot but can also be prone to moments of madness. There’s no middle ground with him, he’s either going to be a superstar at this World Cup or he’ll become the brunt of memes.

What Ghana want most from this World Cup, besides reaching the knockout stages, is justice and retribution against Uruguay, who famously knocked them out of the 2010 World Cup after a deliberate handball from Luis Suarez.

They’re coached by Otto Addo, who represented the country in the 2006 World Cup and he’s been in charge, on a part-time basis, since Ghana’s diabolical African Cup of Nations performance in January.

There’s some talent in the squad, some of which is supplied by players who have been convinced to change nationalities. Inaki Williams and Tariq Lamptey are among those who have decided to switch, from Spain and England respectively, to represent Ghana.

Sadly, for their hopes, they’re yet to be able to convince Callum Hudson-Odoi or Eddie Nketiah to join the Black Stars and the attempt to convince Nketiah to change allegiances probably indicates Ghana’s biggest problem — a lack of goals. With Jordan and Andre Ayew as their forward options, it shows just how weak they are.

Player to watch: Mohammed Kudus could announce himself to the wider world in Qatar. The Ghanaian arrived in Europe in the Danish Superliga before a move to Ajax. He’s played in the Champions League, so he’s not totally new to a worldwide audience but this could be the tournament that makes him a star. The 22-year-old midfielder has been playing further and further forward and has five goals in 14 games for Ajax in the Eredivisie this season and added four in his six Champions League games.

This isn’t a vintage South Korea team, but they have solid players and if they can defend well they can build a platform on which the likes of Heung-Min Son could thrive.

Defense will be key for South Korea, especially with Son potentially missing the opening game as a result of his facial injury and subsequent surgery.

The duo at the heart of the backline, Kim Min-Jae and Kim Young-Gwon, are key. Min-Jae has been excelling at Napoli since a summer move to the club and showed his class in games against Ajax and Liverpool in the Champions League. His partnership with Young-Gwon is integral to their hopes, and that defense only gave up three goals in 10 games in qualifying.

If Son is unable to play in that first game it means we should see Jeong Woo-Yeong or Lee Kang-in, two young players, both playing well in Europe and both ready to take that next step in their careers.

Player to watch: Son Heung-Min is the obvious answer here. He’s South Korea’s one world-class player and an icon in his native country. If he is fit and firing, then they’re in with a shout of beating anybody in this group.

A lot of people are questioning whether Cristiano Ronaldo and the media circus around the player could disrupt Portugal’s run to the knockout stages. There’s probably a chance of that but in truth, there is just so much quality in that team that they should win this group, regardless of how he plays.

The second position is up for grabs and in my view, Uruguay are a great bet at +145 to seal that spot. They have a reasonable, albeit slow, backline, a strong midfield, and a wealth of attacking options.

If they play at their best, then they’re comfortably the second-best team in Group H. 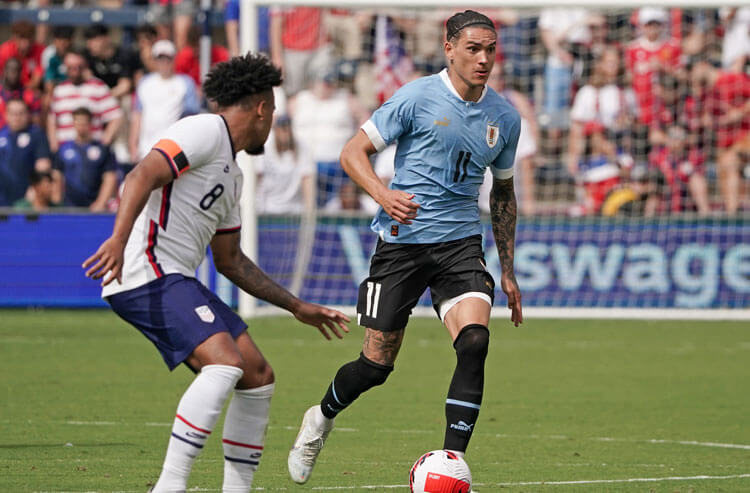