The North London derby is always tense, with a long and heated history between Spurs and Arsenal, and the latest edition will be even tighter with the Top-4 implications obvious. Our EPL betting picks highlight why Tottenham should get a home result.

Thursday gives us a huge Premier League clash as Spurs welcome Arsenal to the Tottenham Hotspur Stadium. The North London Derby is always an occasion worth watching but Thursday’s game might be the most important meeting between the teams in years.

With just four points separating the teams in the battle for fourth spot in the Premier League, this has huge implications on which club will be playing in the Champions League next season. Don’t miss our Tottenham Hotspur vs. Arsenal picks and predictions.

B) Harry Kane, Son Heung-Min, and Eddie Nketiah each to have 1+ shots on target BOOSTED to +150 at Betway! Claim Now

A warm but cloudy Thursday should see temperatures just shy of 60 degrees. There won’t be any rain so you can expect great conditions for the game.

The North London derby is always one of the Premier League’s best rivalries but with both clubs in a battle to finish fourth and get that last spot in the Champions League, it’s taken on a whole new meaning this season. With just three games left, it’s going to be either Spurs or Arsenal in the Champions League next year with the Gunners currently four points ahead of Spurs.

A win would secure the all-important Champions League spot for Mikel Arteta’s team, something which would provide a windfall for the club giving them more money and a better stature to acquire new players in the summer. If Antonio Conte’s Spurs manage to get the win they’ll be just one point behind with two to play, in other words, game on.

Tottenham come into this riding a wave of positivity, having only lost one of their last eight and fresh off a 1-1 draw with Liverpool. Conte’s team were fantastic on that day, defending heroically and ensuring they got the job done. One thing we’ve seen from Conte throughout his managerial career is that he’s a master of the big occasion and setting up teams to excel in those situations. With that in mind, Arsenal need to be very careful.

We should see Conte name the same starting XI that performed well against Liverpool, meaning it’ll be Emerson Royal and Ryan Sessegnon in the important wing-back positions, with Pierre-Emile Hojberg and Rodrigo Bentancur doing the hard work in the middle of the park. They’ll look to cover the backline and get the ball forward to Spurs’ greatest strength, their immense front three.

I’ve praised Tottenham’s attacking trident plenty over the past four months but the way that Son Heung-Min, Harry Kane, and Dejan Kulusevski gel together and bring out the best in one another is incredible. They’re quick, smart, and dangerous in front of goal, and Arsenal’s defense will have to be at their best.

No Kieran Tierney and likely no Ben White from Arsenal’s best back four will be a worry for Arteta against Spurs’ movement, as will Thomas Partey’s continued absence screening the backline. Mohamed Elneny will continue to start alongside Granit Xhaka in midfield and the Egyptian has played well of late but he is a weak link, as is Cedric Soares, who’ll be at right-back with Takehiro Tomiyasu moving to the left flank. The fullback positions are the ones that will be attacked by Son and Kulusevski but it’s equally key that Elneny and Xhaka keep close to Kane when he drops back and creates.

Up front, Arsenal’s hopes will rely on Eddie Nketiah, who has been in great form, scoring four times in as many games. I’m of the belief that this is a purple patch for the 22-year-old and not that he’s taken on a great leap in ability. A matchup against Spurs’ back three and the brilliant Cristian Romero isn’t one he’ll win. Instead, I’d expect any Arsenal success to come from either Bukayo Saka or Gabriel Martinelli attacking the wing-backs.

This is a hugely tough game to call with valid arguments why both teams could and should win. Arsenal won when these two teams met earlier in the season but this is a very different Spurs team. The Gunners are ahead in the table for a reason and across the whole season they’ve been marginally better than Spurs but Conte’s team are really buying into his coaching and it’s clear that they’ve turned the corner.

With Spurs’ front three and Arsenal’s injuries in defensive positions, I think that the home team should come out on top here, given that they’ve scored two or more goals in 10 of their past 12 games at home.

We’ll follow the trends on this one. Firstly, there have been Over 2.5 goals in six of Arsenal’s last seven games in the Premier League. In addition to that, both clubs’ records across the season point to this being a high-scoring game.

With the danger of Spurs’ front three and in particular the threat that Kane creates when he drops back and orchestrates play, I love the +100 available on Arsenal’s Swiss midfielder Granit Xhaka to get booked.

Xhaka thinks of himself as a hard man and his career has seen far too many stupid bookings when he’s got caught up in the emotion of games. He leads Arsenal in Premier League bookings this season with nine in 24 games, including one red card. His three appearances in the Carabao Cup this campaign also saw him add another red card to his collection, making it 11 sending offs in his career.

Xhaka is a far better player than a lot of people care to admit but you can’t ignore his history of rash bookings. This fixture, in particular, has seen plenty of them, with three bookings in the past five North London derbies. Some sportsbooks have the odds on a Xhaka booking as short as -200, so it’s well worth jumping on this +100 with FanDuel, grab it while you can. 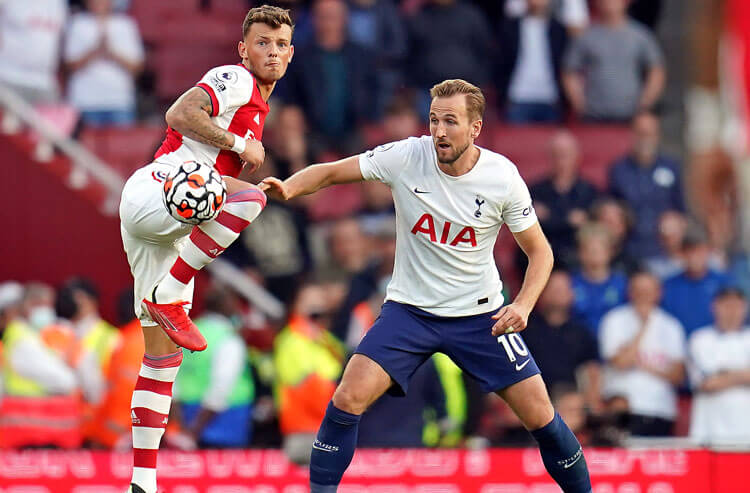 Tottenham vs Arsenal Picks and Predictions: High Stakes in North London
Provided by