Wolves vs Manchester City Picks and Predictions: City Closes in on Title

Wolves are hungry, but they've also struggled to get on the score sheet, and will be in tough against a City side looking to lock up the EPL crown. Find out how we're getting creative in backing the favorites with our Wolves vs. Manchester City picks.

With just three matches remaining in their Premier League campaign, Manchester City are a maximum of seven points away from winning their fourth title in five years. They travel to Molineaux on Wednesday to take on Wolverhampton Wanderers, with the hosts clinging to an outside shot at qualifying for next season’s Europa Conference League if they can win their final trio of fixtures.

With the title nearly in sight and Liverpool close on their heels, Manchester City will be focused on defeating a Wolves side that showed over the weekend they can pull off a shock result. Will they claim a crucial three points on the road? Check out our Wolves vs Manchester City EPL picks and predictions for Thursday, May 11.

It will be a calm evening in Wolverhampton on Wednesday, with temperatures in the low 50s at kickoff and dropping slightly throughout the match. Rain is expected earlier in the day, but conditions will dry up prior to kickoff. Wind gusts may jump into the 20-mph range as well.

Wolves pulled out a shocking 2-2 draw away at Chelsea on the weekend, in a match that appeared lost with a quarter of an hour to go. A Romelu Lukaku brace early in the second half put Chelsea in front, but Wolves refused to concede defeat. Chiquinho came off the bench to first set up Trincao, and then assisted Conor Coady’s last-gasp equalizer seven minutes into added time. The result ended a three-match losing streak during which Wolves failed to score a single goal.

With just three matches remaining, they have a match in hand over seventh-place West Ham United. A victory on Wednesday would pull them within two points of the London-based outfit and give them an outside shot at qualifying for Europa next season, but that would also require taking results over Manchester City and Liverpool over the next 10 days. To do that, they’ll need to improve their home form, where they’re allowing nearly a third more xG against this season than they generate.

Manchester City comes to town with Liverpool hot on their heels, having pulled level on points with a 2-1 win over Aston Villa on Tuesday while having played one more match. City can move clear of them again with a result against Wolves, whom they’ve beaten in each of their last three matchups. The visitors are in stellar form, having won 21 of their last 25 Premier League matches, and they’ve set a new club record with a 16-match unbeaten run away from the Etihad.

Pep Guardiola will be forced to slide Fernandinho back into a center-back role, after announcing a few days ago that defenders Kyle Walker, John Stones, and Ruben Dias will all miss the remainder of the season to injury. Should Nathan Ake also miss out with an ankle issue, the Brazilian midfielder will partner Aymeric Laporte in the back as part of a defense that hasn’t allowed a goal in their last 560 minutes of away action. That said, their defense hasn’t been tested a whole lot, and in their 5-0 win over Newcastle on the weekend they maintained near-constant possession.

Manchester City leads the Premier League with 42 points taken away from home, and they have won 13 matches during their away unbeaten run. They are averaging an xG of a goal and a half more than their opponents on the road, and they’ve conceded just one goal in their last four matches while scoring 17 of their own. Given the issues Wolves have had of late defensively, having kept clean sheets against only lowly Watford and Everton in their last 12 matches, City should win this one easily.

Given there is absolutely zero value in betting them outright, I recommend checking out the half-time/full-time wager. Manchester City have been ahead at the break in each of their last three wins, as well as four of their last five outings. City have been jumping on their opponents early in recent outings, and given the stakes, I see no reason why that shouldn’t happen again here.

Until Chelsea utterly capitulated against them, Wolves had failed to score in more than 310 minutes. It’s not like they were playing powerhouses during that span, with Newcastle, Burnley, and Brighton holding them off the scoresheet. Additionally, in their eight home matches this season against sides in the top half of the table, Wolves have scored a total of one goal.

Manchester City, meanwhile, haven’t conceded a single goal in their last five road matches. Even with the missing players in the back line, I don’t see Wolves being the side to break through. City completed nearly 100 more passes in Newcastle’s end of the pitch than Newcastle played all match, and they should enjoy a similar share of possession in this one. Wolves will have very few chances, and it’s unlikely they will convert any of them. Take Manchester City to keep yet another clean sheet on the day.

In their last six matches, Manchester City have won nine of the 12 halves played. The only three exceptions were the second half of the 2-2 draw with Liverpool, a Brighton side who stayed compact and held City off the board in the first half, and a Burnley squad who trailed 2-0 at the half and parked the bus after the break.

On the flip side, Wolves have been outscored in five of their last seven halves of football. I expect that total to go up against a City side that in their past three matches have outscored their opponents 14-1, and have scored multiple goals in each half.  In a match where betting value is difficult to find, this is by far my favorite value play.

Pick: Manchester City to win both halves (+155 at DraftKings) 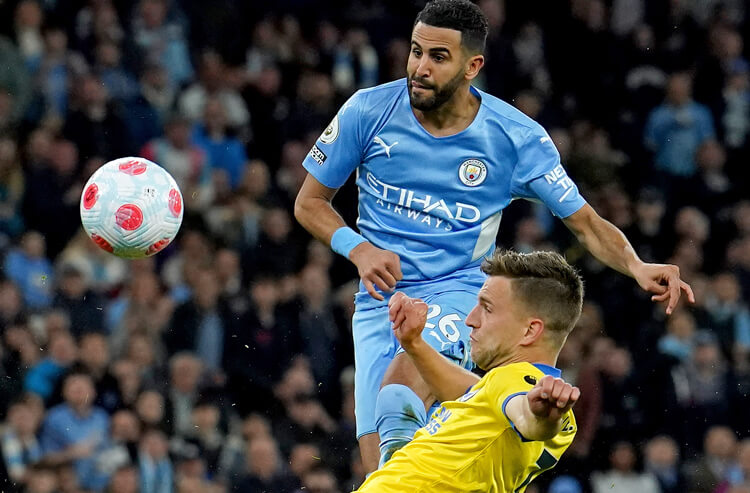 Wolves vs Manchester City Picks and Predictions: City Closes in on Title
Provided by