Aston Villa head to Southampton on Friday nearing rock bottom after another defeat. With just a point separating the two, Villa will like their chances of a result — but our picks highlight why Southampton will only further sink the Villains' season.

Matchweek 11 of Premier League betting will begin on the South Coast, where a struggling Aston Villa side will visit St. Mary's to face Southampton.

Though just a point is between the two in the table, the Saints have taken seven points from their last three games, while Villa have lost four consecutive games as tension around the club grows.

Find out if Aston Villa's woes will drag on with our free soccer picks and predictions for Southampton vs. Aston Villa, with kickoff on November 5.

It's expected to be a clear night in Southampton on Friday, with partly cloudy conditions and temperatures around 45 degrees Fahrenheit at kickoff with little wind.

It's a battle of No. 14 vs. No. 15 in the league on Friday, which is only partially surprising. Southampton have flirted with relegation battles several times in recent years and didn't get their first win of the new season until mid-October, as another year in the bottom half of the table was anticipated. Since that win against Leeds, however, the Saints have found good form with four points from the subsequent two games.

For Aston Villa, however, the new season has been bitterly disappointing for a club with wealthy owners and the intention to build upon an 11th place finish a season ago. It has been a season of transition for Villa, as the midlands club adapts to life without Jack Grealish after their talisman moved onto Manchester City over the summer. That transition has not been easy, as Aston Villa have taken just 10 points from 10 games.

Embattled manager Dean Smith had been attempting a tactics change, adopting a three-man backline with wingbacks, but their defensive record and lack of impact from the squad's wingers — which includes two key figures in Leon Bailey and Emi Buendia — led him to revert to the 4-3-3 they'd used in previous seasons last weekend. The result? A 4-1 loss to West Ham.

Not only have Villa effectively nullified their own attack, with the fifth-fewest xG in the league this year, but their defensive record is shambolic. They've given up the third-most goals in the Prem with the fifth-highest expected goals against, with 10 goals conceded over their previous three games and four straight with multiple goals allowed. A return to old tactics may yet prove wise but the early returns were not encouraging.

It's unlikely to improve at the weekend, either, as they pay a visit to a Southampton side in good form, and one with a superior goal-scoring record and a better defensive record.

No team has been more unlucky in front of goal this year than Southampton, with nine goals scored compared to 14.7 xG, after finishing 13th in both metrics last season. Southampton's 14.7 xG is the eighth-highest in the Premier League, while the seven clubs ahead of them have scored no fewer than 15 goals on the year.

Positive regression is sure to come for the Saints, as they're not short on talent, with a front-two of Adam Armstrong and Che Adams combining technical ability, pace, and finishing, and complemented by Nathan Redmond and Mohamed Elyounoussi on the wing, with James Ward-Prowse pulling the strings in midfield.

Villa's defensive issues, meanwhile, have reached disastrous levels. Last weekend, Smith left captain Tyrone Mings out of the starting lineup, only for his replacement, Ezri Konsa, to get sent off while the team allowed four goals. The slow-footed Mings will now come back into the fold against a front two not short on pace, and the backline may not have Douglas Luiz in midfield ahead of them after the Brazilian missed last week's game with "COVID issues". 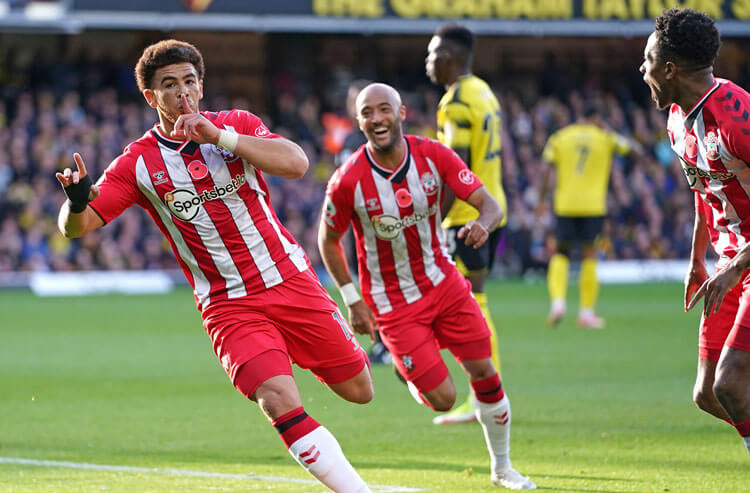