The Manchester derby highlights this Premier League weekend, as City make the short trip to Old Trafford and Man United. These fixtures have been competitive in recent years but our picks highlight why the gulf in class will be more apparent than ever.

Well, it's Groundhog Day. Just two weeks after fans at Old Trafford watched in horror as hated rivals Liverpool tore their team apart in a 5-0 loss, Manchester United's blue neighbors are coming across town to do the very same.

Under manager Ole Gunnar Solksjaer, Man United have been surprisingly competitive against Manchester City, with four wins in eight, but the talent gap is staggering as the derby comes around again. Can Solksjaer and Man U find another result?

Here are our picks and predictions for this weekend's headliner in Premier League betting, Manchester United vs. Manchester City, with kickoff on November 6.

If you're signing up for a new sportsbook for the some EPL betting, here are two of the best welcome bonuses available:

Rain will be falling on Manchester throughout Saturday, with 80 percent precipitation forecast at kickoff and temperatures expected around 50 degrees Fahrenheit.

Manchester United's reprieve was brief. After they staved off further crisis with a comprehensive win over a similarly lost Spurs team in London last weekend, they needed Cristiano Ronaldo to twice rescue them midweek in a draw against Atalanta in the Champions League. While Ronaldo's equalizer led to brief elation within the club, it's back to reality as Man U face down an ass-kicking from their so-called little brothers.

While just three points separate the two Manchester clubs in the table, there are massive differences between the two.

City manager Pep Guardiola is among the world's best and certainly most important managers, while Solksjaer was unlikely to ever get another Premier League job after getting relegated with Cardiff City, had he not had ties to Man U from his playing career.

The Citizens have world-class talent and depth across their squad, while the Red Devils have but a handful of top-tier players.

And, while Man City have the numbers to suggest they're elite both defensively and in attack, Man United's underlying metrics only reaffirm the mediocrity that's apparent.

Manchester City have scored the third-most goals in the Prem (20), are second in xG (21.9), and second in shot-creating actions per 90 (28.80) despite their lack of a proper striker apparent in most matches. An elite goalscorer is all that's missing from a squad filled with creative players, as they lead the Premier League in progressive carries into the attacking third and the penalty area.

Man United, meanwhile, are fifth in goals scored this season but seventh in xG. Ronaldo has popped up with several important goals already this season but it's out of possession where he is most relevant, and not in a positive sense. His inability or refusal to work off the ball will enable City to break any attempted press by Man U with ease, and it will then leave his team undermanned further up the pitch as City progress the ball.

Defensively, the gap between the two is even more significant. City have, by a wide margin, the lowest xG against, at just 7.4, while Man U have allowed more than double, at 15.4 (13th in the Prem). And while City have the reigning Player of the Year, Ruben Dias, marshaling their backline, Man U sit back and watch while Harry Maguire gets Mossed by opposing attackers on a weekly basis.

These two teams exist within the same city but they are in very different classes. On their day, Manchester City are the greatest team in the world and are managed by the most influential manager of the century. Manchester United, meanwhile, are a mediocre team that have been directionless for years now. Just as I wrote prior to their loss to Liverpool, Man U's greatest victory this weekend would be finally firing Solksjaer. Just like in the loss to Liverpool, Manchester United won't even get close to their rivals.

The massive gulf in class between the two will be reaffirmed as Manchester turns blue on derby day.

Ferran Torres' long-term injury was a blow to a City team already short on strikers, as Pep's latest winger-turned-forward had taken to his new position brilliantly. However, Torres' injury also enabled City to turn to a front three which has been nothing short of fantastic, with midfielder-turned-winger-turned-forward Phil Foden flanked by Jack Grealish and Gabriel Jesus.

Foden was the best player on the pitch in his first start through the middle, scoring twice and adding an assist in a 4-1 win over Brighton, a game in which City created a (Premier League) season-high 3.9 xG. He was yet again the star in his team's 4-1 win over Club Brugge in the Champions League this week, scoring the first as City finished with 4.4 xG, their highest total across competitions this season. At least until January, the front three of Grealish-Foden-Jesus should be expected to continue, and Foden's performances should only grow as he continues to adapt to a new position.

We've already seen Foden dominate big games for City this season, as he was far and away the best player on the pitch against Liverpool. He'll repeat that feat on Saturday, wreaking havoc on a leaky Manchester United defense and add a sixth goal this year. 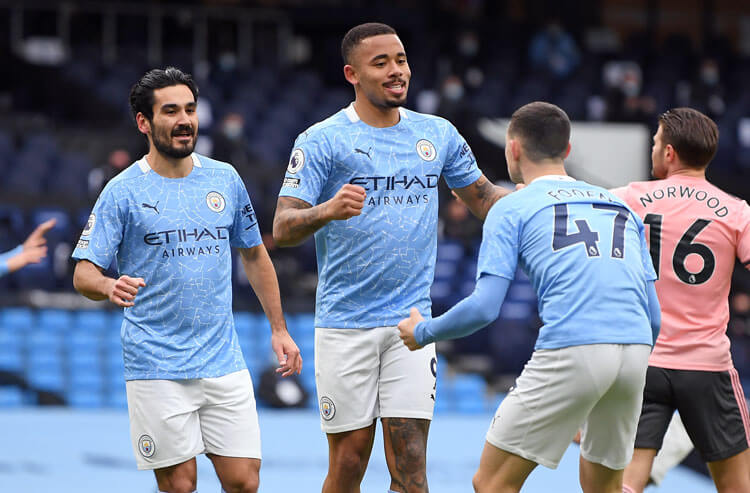 Manchester United vs Manchester City Picks and Predictions: Red or Blue?
Provided by