Manchester United vs Everton Picks and Predictions: Dreams or Nightmares at Old Trafford?

It's four vs. five in the Premier League table on Saturday at Old Trafford, as Everton visit Manchester United. With Man U losing in terrible fashion a week ago and Everton starting well, could it be consecutive losses in Manchester? Read on for our picks.

An early-season clash for a European place will take place at the Theatre of Dreams on Saturday, as fifth-place Everton make the short trip to Old Trafford to take on fourth-place Manchester United.

Man U were defeated in brutal fashion a week ago at home, with Bruno Fernandes missing a last-moment penalty to salvage a draw in horrible fashion. With Everton starting the season brightly, could the Red Devils be looking at consecutive losses at home? Read on for our free picks and predictions for Manchester United vs. Everton.

Rain is expected in Manchester in the lead-up to kickoff and throughout the match on a wet Saturday. Wind shouldn't factor in, with temperatures expected around 55 degrees Fahrenheit.

You have to feel for Everton, as they would have loved their chances of getting a result in this matchup if they had a squad at full health. Instead, the depth they have built up is already strained as their two best attackers in Dominic Calvert-Lewin and Richarlison remain out, among a number of others.

Under new manager Rafael Benitez, Everton have gotten off to a fantastic start with a 3-1-1 record through five matches despite injuries that would have derailed Toffee sides of the past. More impressive is that Everton sit third in the Premier League in expected goal differential, at +3.7, behind just Liverpool and Manchester City. Benitez's ability to instill immediate organization in defense and clear tactical awareness throughout his squad, meshed with existing talent, has seen Everton finally live up to expectations after several underwhelming seasons.

Just behind Everton in expected goal differential, at +3.2, are Saturday's hosts Manchester United. While the Toffees are a side with a manager getting the absolute most out of his team, Manchester United continue to waste time with Ole Gunnar Solskjaer, a manager so far out of his depths it's a miracle he hasn't yet drowned.

However, a reason for such scrutiny toward Solskjaer is the squad he has at his hands — one with world-class talent in defense, midfield, and in attack. As it typically is for Manchester United in closely contested games like this, their talent should provide the edge. Even their biggest issue, the lack of a true defensive midfielder, should be mitigated against an Everton side whose best midfielders, Abdoulaye Doucoure and Allan, rarely drive forward through the midfield in possession.

While we are taking Manchester United to win at home, make no mistake, the margins are closer than the odds suggest. Everton have a talented squad with considerable depth and a world-class manager whose qualifications tower over Man U's happy-go-lucky cheerleader-turned-manager. Manchester United's talent and home-field advantage give them the edge here but expect a strong fight from the Merseysiders.

These are absurdly good odds to score for a player in Andros Townsend who leads Everton in goals (4) and assists (3) in all competitions this season and is in some of the best form of his life. In each of Townsend's brief spells under Benitez, the winger has played at his absolute best, scoring three and assisting two in 10 appearances under Benitez at Newcastle, and now emerging as a key figure in Benitez's Everton.

Townsend's immediate strong form has been crucial for Everton, after both Calvert-Lewin and Richarlison were lost to injury early in the season. The Toffees look to Townsend as a creative outlet, and his ability to make runs behind the defense has been heightened with dominant hold-up man in Salomon Rondon playing through the middle in recent games.

Townsend's love for playing wide right and cutting in on his dominant left foot will enable him to find goalscoring opportunities against Man U. Left-back Luke Shaw, who suffered a muscle strain midweek, is not a great defensive fullback, nor is Alex Telles, who would start in his place should he be held out. Paul Pogba, typically lining up to the left in midfield, has a tendency to roam and isn't the most attentive defender off the ball. Further up the pitch, Jadon Sancho is not one to track back and assist defensively, while Cristiano Ronaldo, who could line up on the left as well, hasn't pressed an opponent off the ball in half a decade.

Furthering Man U's defensive woes is the recent loss of Harry Maguire, who is expected to miss several weeks and is the central organizer of their defensive line. As a result, Townsend can add to his run of form against Manchester United with a fourth goal in his last five appearances. 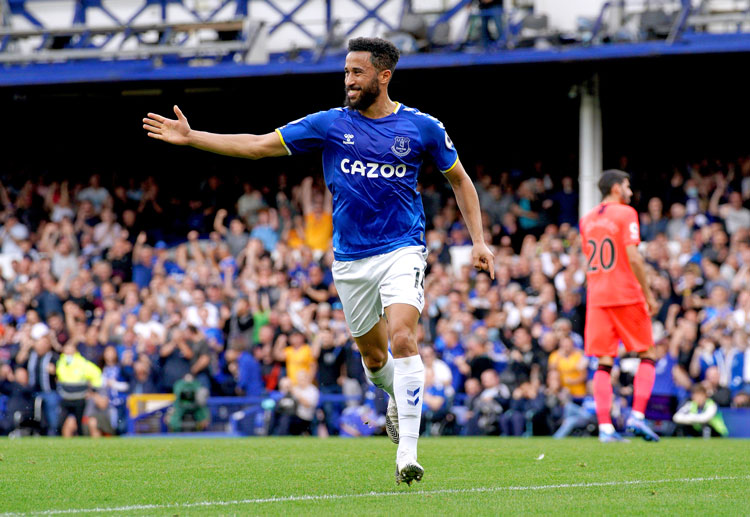 Manchester United vs Everton Picks and Predictions: Dreams or Nightmares at Old Trafford?
Provided by