Liverpool vs Manchester City Picks and Predictions: Another Chapter in an Era-Defining Rivalry

With two title fights already in recent years, Liverpool and Manchester City have emerged as the two biggest contenders for the Premier League early this season. Our picks look at what might separate the two as they renew their rivalry at Anfield.

The rivalry that has defined the last several years of Premier League soccer will take place on Sunday in one of the country's best venues, as Manchester City travel to Merseyside to face Liverpool at Anfield.

These two clubs have been closely intertwined since the 2017-18 season, with managers Jurgen Klopp and Pep Guardiola even longer, and they typically produce classics when they clash.

With both teams starting the new season strongly, all eyes will be on a game that could end up having considerable title implications. Read on for our Liverpool vs. Manchester City picks and predictions to find out how we like it to play out.

Showers are expected throughout the day in Liverpool leading up to kickoff and are forecast to continue during the match but drop to just 25 percent precipitation. Temperatures are expected around 60 degrees Fahrenheit.

Regular service has resumed in the Premier League after Liverpool's season was derailed a year ago by injuries, and that means Liverpool and Manchester City on top of the league and ready to fight every step of the way. Though Liverpool currently sit atop the Premier League with 14 points, one ahead of four clubs tied on 13 including City, underlying numbers suggest a much larger gulf between those two and the rest of the league.

There is genuine concern around the Reds' squad depth, particularly come January when Mohamed Salah and Sadio Mane go to the African Cup of Nations, but currently, these are the two best teams in the country, overseen by the two best managers, and it's difficult to argue otherwise.

The presence of Guardiola and Klopp in this fixture can't be understated, either, as their respective teams have been built in their vision and embody what they believe about the modern game, with the rapid ball movement and positional fluidity of Guardiola's City and the relentlessness of Klopp's Liverpool staples in every game they play in. Also ever-present in this fixture, however, is competitiveness, with City and Liverpool rarely playing lopsided games since Guardiola arrived in Manchester, despite the Sky Blues having a considerably stronger squad in several of those seasons.

In the 10 Premier League games contested between the two, Liverpool have won three and City have won four, with three draws. One of those draws occurred, at Anfield, in the 2018-19 season, in which City won the league by a single point over Liverpool. When both teams are at their peak, they play off of one another so well. City is able to play out of Liverpool's press and bypass their dogged midfielders with line-breaking passes, while Liverpool's defensive organization and stability through the middle, led by Fabinho and Virgil van Dijk, isn't undone by City's quick passing patterns and movement.

Both teams possess the attacking quality to find goals but there isn't a big enough gap between the two to find a difference. That has previously been the case both over the course of a full season and within individual matches, and it will again be the case on Sunday when the league's two best teams split the points.

There are few players in the history of the Premier League to score at the rate Mohamed Salah has since joining Liverpool and this season, the Egyptian King has started better than ever. Salah is primed to reach the statistical heights reached in his incredible 2017-18 season, in which he scored 50 in 58 games across all competitions.

In nine appearances across all competitions this season, Salah has scored eight and assisted two, with an xG of 6.5 while dwarfing the shot-creating actions he averaged in his incredible breakout season. Despite Sadio Mane's continued struggles and a relative newcomer to the front three in Diogo Jota playing through the middle, Salah has dominated games and has played with a level of comfort not seen for several seasons — since Mane, Salah, and Roberto Firmino laid claim to the title of the best-attacking trio in the world.

Salah has six goals in 10 competitive fixtures against City since joining the Reds, with one of his goalless appearances being just a 45-minute bow. Salah enters this game in scintillating form, and with the defensively responsible James Milner playing behind him at right-back, he will be free to roam and drift inside as he pleases. Just as Liverpool have since he arrived, count on Salah to score this weekend. 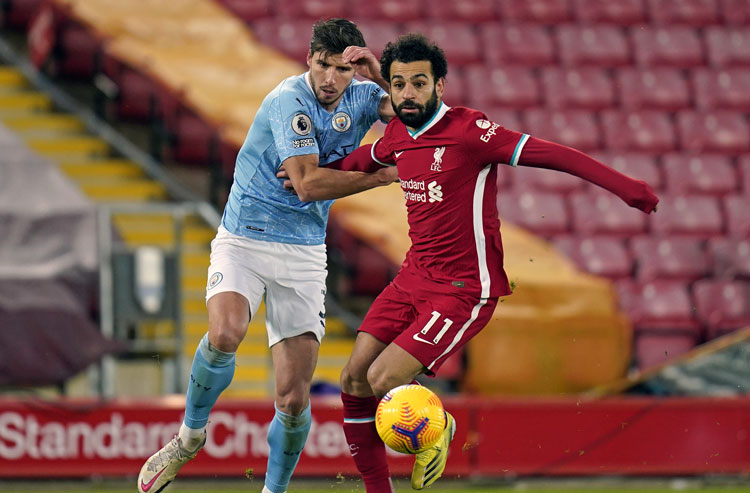 Liverpool vs Manchester City Picks and Predictions: Another Chapter in an Era-Defining Rivalry
Provided by

Brighton vs Arsenal Picks and Predictions: Firing on all Cylinders
Sam Farley | Sep 30, 2021