The Islanders are scoring more goals per game (3.36) than any remaining team in the playoffs, and have netted at least four goals in five of their six home playoff games. Find out if we like them at plus money in our Lightning vs. Islanders Game 3 picks.

The semifinal matchup between the New York Islanders and Tampa Bay Lightning will head to Long Island on Thursday with the series knotted at 1-1 after Tampa's 4-2 win on Tuesday.

New York’s Semyon Varlamov stole the show in Sunday’s 2-1 victory but it was the Bolts’ Andrei Vaslievskiy who earned the win in Game 2, stopping 24 of 26 shots and 11 of 12 high-danger chances.

Oddsmakers have the Islanders as +120 home dogs with the total opening at 5.5 and reaching 5.

Here are our free NHL betting picks and predictions for Lightning vs Islanders on June 17.

The Game 3 moneyline did a little back-and-forth at TwinSpires Sportsbook, with Tampa Bay opening -139, stretching to -152 and returning to -139, where the price sits at 5 p.m. ET. The Islanders are nabbing 55 percent of tickets and the Lightning 55 percent of money. "Great two-way action here," TwinSpires trading analyst Zachary Lucas said. The total opened at 5 (Over -128) and adjusted to 5 (Over -143), with 77 percent of tickets/84 percent of dollars on the Over. "Liability is creeping up on the Over. We'll be rooting for a 2-1 type of game," Lucas said.

The Over is 6-0-1 in Islanders’ last seven games after scoring two goals or fewer in their previous game. Find more NHL betting trends for Lightning vs. Islanders.

The Lightning avenged a 2-1 loss in the opener by picking up the comfortable 4-2 win Tuesday, evening the series as it heads to Nassau Coliseum. The Bolts are 5-1 SU on the road in the playoffs but are averaging just 2.50 goals per game. The Islanders, on the other hand, have the best home offense in the postseason and are scoring four goals per game with a 4-2 SU record. They’ve also outscored their opponents 24 to 14 and have allowed more than two goals just once in their last five games at the old barn.

A big angle in Game 3 is who Barry Trotz will start in goal. Varlamov had his best game of the postseason on Sunday but the Russian netminder didn’t mimic that performance in Game 2. He finished with a -0.26 xgoals saved, per MoneyPuck, and was lifted in the first period after a collision with Tampa’s Brayden Point. He returned in the second period but gave up three goals on 16 shots. Trotz is not afraid to switch things up and backup Ilya Sorokin is more than capable of getting it done. If you’re interested in an NYI ML, waiting until they announce a goalie may be best as we suspect the line to jump if Sorokin gets the nod.

Despite the 4-2 finish and Tampa playing with a two-goal lead for most of the third period, this game was much closer from a metric standpoint. The Islanders had 4.99 xgoals to the Lightning’s 4.25, and both teams managed an equal amount of scoring chances at 5-on-5. The biggest difference was Vasilevskiy stopping nearly everything he saw while Varlamov wasn’t at his best.

The Lightning also adjusted after Sunday’s loss and managed to bully the Islanders’ bully lines. The Martin-Cizikis-Clutterbuck line finished with a 17.9 percent xgoal to go along with a 25 percent Fenwick. Even worse than them was the Pageau-Palmeri-Zajac line that managed just one shot attempt while giving up 11. The Bolts’ top line was dominant as Nikita Kucherov added three helpers, and Point and Ondrej Palat each had a goal.

Things should be a little different in Long Island with Trotz getting the last change and being able to match up much better against the Kucherov line. The Islanders will also look to stay out of the box as they took a playoff-high 10 total penalties which, against the Tampa Bay power play, is a death sentence but also rearranges your lines and is hard to recover from.

Nassau will be bumping and the Islanders have shown through two games that they can be just as offensive as the Lightning. They just can’t let Vasilevskiy get on a role.

Whether it’s Varlamov or Sorokin, we like the Islanders to continue to score in front of a buzzing home crowd and take the series lead on Thursday at plus money.

Tuesday’s Over may have been a little sweaty, but this was a game that had nearly eight xgoals despite under 60 shots combined. Even Sunday’s 2-1 New York win had plenty of chances and finished with five xgoals. With the six-goal game on Tuesday, the Islanders are now 8-5-1 O/U in the playoffs and 6-2-1 O/U in their last eight games. They are scoring more goals per game (3.36) than any remaining team in the playoffs and have been scoring at will at home, having netted at least four goals in five of their six home playoff games.

Mathew Barzal continues to carry this team offensively and is becoming an elite player with the puck on his stick. He has five goals in his last six and has collected seven points over that stretch. The Islanders had nine PP opportunities on Tuesday and giving Barzal time and space with the man advantage is asking for trouble.

Not to be outdone, Tampa Bay’s Kucherov is third in Conn Smythe odds and the first skater behind goalies Marc-Andre Fleury and Vasilevskiy. His three assists Tuesday pushed his playoff total to 22 points through 13 games. The Islanders may have beaten the Bruins but the big line in Boston managed 11 goals and totaled 23 combined points in the series. The top line in Tampa could easily see the same production going forward.

Another big factor in the Over is the amount of power-play time each team got in Game 1. Combined, there were a total of 20 power plays. If the refs are going to call another game like that, it will be impossible to trust the Under no matter how good either netminder is playing.

We would rather pass than hit an Under 5, as so many things have to go right for the win. Sign us up for the Over on Thursday.

Did you know that if you parlayed today’s NHL Lightning vs. Islanders picks, you could win $28.30 on a $10 bet? 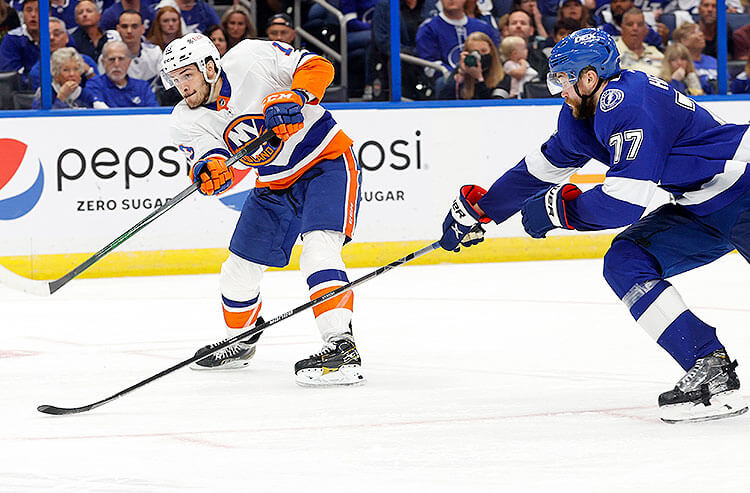 Lightning vs Islanders Game 3 Picks and Predictions: Offense Takes Off at Nassau
Provided by