Sometimes one bet just isn't enough of a sweat. Luckily, the Parlay Queen, Monique Vag, is here with her weekly NFL parlay picks, giving you the best bets to double down on for Week 12 action.

We were blessed with some extra football earlier on in the week, with the Thanksgiving slate delivering three games to start Week 12.

The Buffalo Bills bounced back in a big way, and the Detroit Lions' struggles continued after suffering another heartbreaking loss keeping them out of the win column.

With a lot of small spreads, we look to be in another tricky week of NFL wagering. Here's a look at my favorite NFL parlay picks for Week 12.

If you're signing up for a new sportsbook for NFL Week 12 action, here are two of the best welcome bonuses available:

The Cincinnati Bengals got the better of the Pittsburgh Steelers earlier this season, with a big road victory in Week 3. A key to the Steelers' success will be handing the ball off to Najee Harris, who has been very efficient this year. The Bengals, however, did a great job keeping Harris in check in their first meeting, holding him to 40 yards on 14 carries, with most of that coming on one long run. He averaged 2.9 yards a carry.

Harris is coming off a tough game, putting up 39 yards on 12 carries against one of the league's worst rushing defenses in the Los Angeles Chargers. Look for a similar outcome to Week 3.

This matchup could definitely have some playoff implications as the Tennessee Titans travel to New England to take on the Patriots. The Titans currently sit atop the AFC South at 8-3 but have a slew of injuries and are fresh off a disappointing loss to the Houston Texans.

The Patriots are one of the league's hottest teams, riding a five-game winning streak. Their defense ranks third in the NFL in total opponent yards per game, with 313.2, and are in the Top 10 in both passing yards allowed and rushing yards allowed. With key injuries on both sides of the ball and Ryan Tannehill coming off a four-interception game, I like the Patriots to win big and make a statement.

The Los Angeles Rams enter Sunday's contest fresh off a bye week and look to bounce back in a big way against a tough opponent on the road, traveling to Lambeau Field to take on the Green Bay Packers.

This is a rematch of last year's divisional round, where the Packers got the better of the Rams. With issues to the Packers offensive line, missing three key pieces, and Aaron Rodgers struggling with a toe injury, I think solid defensive play from the Rams and a resurgent offense, averaging 27.1 points per game, could get the better of the Packers.

The Denver Broncos host the Los Angeles Chargers in a very important game for the AFC West playoff race. For the Chargers, Justin Herbert has been stellar the past few games, completing over 73 percent of his passes and throwing for over 350 yards in each of his last two games.

Herbert’s been efficient managing the ball and has played incredibly well versus AFC West teams - putting up big numbers in both matchups this year and playing mistake-free football. I think that trend continues Sunday. 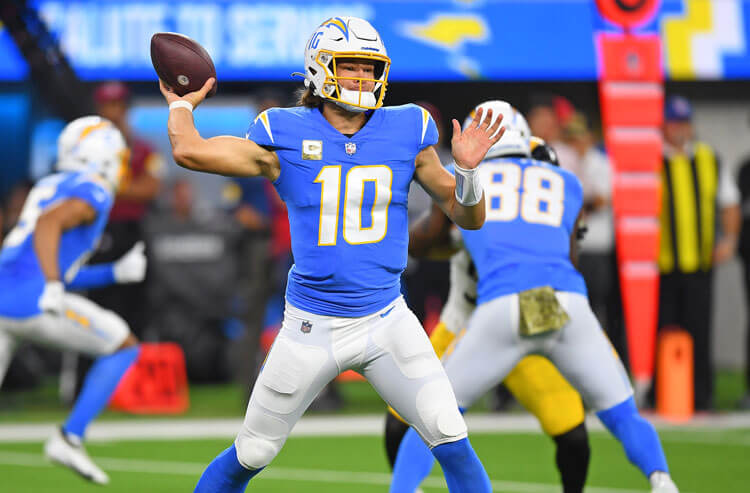