A New York Giants offense adrift received a coordinator change this week, and it may give their high-priced free agent addition a life raft — find out that and more in our Week 12 NFL player props.

The turkey is done and it’s time to get things back to normal with Week 12’s Sunday slate of props. We’re eyeing an Over in the Giants’ offense, finding our best fringe tight end play, dissecting the Colts’ run game, and fading the San Francisco playboy for one more week.

We bring you our favorite free prop picks and predictions for Week 12.

Jason Garrett has been axed and rumors are floating that receiver Kenny Golladay’s role within the offense, or lack thereof, had something to do with it. Joe Judge is on the record as saying he will “correct that” in regard to the receiver’s usage over the last two weeks. Golladay was not a Garrett fan but could get the squeaky-wheel play in Week 12 versus a Philadelphia defense that allows a 72 percent completion rating.

Golladay will be the No. 1 option in the passing game with Sterling Shepard out and Kadarius Toney also unlikely to suit up. Freddie Kitchens will assume play-calling duties and will look to get the ball into his best receiver’s hands in a game where the Giants are 3.5-point underdogs.

Golladay’s prop numbers have already started to head north, as his receiving yard total sits as high as 50.5 yards after opening at 44.5. In the first four weeks of the season, the former Lion averaged 70.5 yards receiving on 4.25 catches.

We’re more inclined to take the Over on his reception total of 3.5 as the Eagles don’t give up a ton of yardage to opposing wide receivers (125 yards per game). We wouldn’t be surprised if New York scripted some plays early for Golladay and hit him with some quick-hitters to get him invested in the game.

We’re already hitting Josiah Deguara on the touchdown market and think he’ll have a chance at topping his receiving total that sits at 13.5 yards.

Deguara is still the No. 2 tight end on the Packers behind aging veteran Mercedes Lewis. Over the last four weeks, he has seen 81 snaps compared to Lewis’s 119, but out-snapped the veteran 27 to 17 in Week 11. Deguara saw a season-high 20 snaps in the passing game last week and his 0.27 targets per route run is a good indication that his production will likely increase going forward.

The Rams have been getting hit hard by opposing tight ends over their last three games as George Kittle, Geoff Swaim, and Bevin Jordan have totaled 12 catches for 120 yards and three scores in consecutive games versus Los Angeles. Deguara has at least two catches in four straight games with an increasing role within the offense and could set season-highs Sunday with Davante Adams likely seeing a ton of Jalen Ramsey.

Fringe tight ends are our specialty, and this is one of our favorite modest-totaled tight end props for Week 12.

Running against the Buccaneers is not advised. They allow the fewest rushing yards in the league, at 56.2 yards per game. Jonathan Taylor will surely get his chance to break the best rush defense in football but it’s his possible work in the air that has us pulling out our wallets.

Tampa Bay allows an average of 47.8 receiving yards to opposing running backs. Its 7.1 receptions allowed to the position ranks as the third-highest mark in football, as teams know if they want to get their backs involved, running through that defensive line is likely a losing strategy.

Taylor has been unstoppable on the ground of late and we thought hard on his rushing total of 80.5 yards versus a defense possibly without Vita Vea, but if Tampa gets up quick, that becomes a lofty total for a team likely only running once on each set of downs while trailing.

Taylor is arguably the best runner in the league right now and is coming off a five-touchdown game. He has caught at least three balls in six of his last eight games and if the Colts struggle to get the chains moving on the ground, Taylor should see some action in the passing game. We like the Over on his reception total better than his 23.5 receiving yard total.

Jimmy Garoppolo has thrown more than 29 passes just once in his last six starts. He threw the ball just five times in his team’s opening 20-play drive last week where he also took two sacks. He would finish with 22 total pass attempts as Kyle Shanahan shut down the passing game playing with a lead.

Since taking over the starting job again, Garoppolo is averaging 27.2 pass attempts per game and with Elijah Mitchell possibly suiting up, the ground game could be a strength again versus a Minnesota defense that ranks No. 8th against the pass but 23rd vs. the rush. The 49ers are also one of the slowest teams in the league and rank in the bottom-five in plays per game.

Over San Francisco’s last two games (wins over the Jaguars and Rams), the offense has rushed the ball 86 times compared to 41 passes. As long as the 49ers don’t fall behind by 14 points in the first quarter as they did against the Cardinals, this will be a run-first offense that doesn’t want Garoppolo to be the deciding factor. Give us the Under 30.5 passing attempts for the second straight week.

The Jets will be without running back Michael Carter for the next couple of weeks thanks to a high ankle sprain. He’ll be replaced by the tandem of Tevin Coleman and Ty Johnson, the latter of whom will be taking care of third down duties and the hurry-up offense. That leaves Coleman to take early down handoffs in a game that sharp money is expecting to be competitive.

Coleman took five of the six carries last week in Carter’s absence and will face a Houston rush defense that sits 25th in success rate and 24th in rush EPA. The Jets have actually been somewhat successful on the ground of late (hopefully it wasn’t just Carter) and gained 5.7 yards per carry last week versus the Dolphins.

Coleman’s rushing total sits at 36.5 yards, which is as low as it gets for a probable early down back. With the Jets amazingly thin at quarterback this week, with Josh Johnson likely backing up Wilson, a conservative approach with an emphasis on ball security could be in the game plan, which would make 37 yards look like a layup if Coleman gets the early work. Houston allows 117.4 rushing yards to opposing RBs which is the highest total in football.

Tyrod in the rough

It didn't take Tyrod Taylor long to find his legs, as Houston's quarterback has been getting it done on the ground since returning from a hamstring injury. The signal-caller has trust in his muscles and has run for 51 yards in his last two games, and scored two rushing touchdowns last week. TyGod has the confidence and will look to keep the Jets’ defense honest Sunday with a rushing prop sitting at 21.5 yards.

Taylor hasn’t found much success in the air since his return as he has just 347 yards in 67 pass attempts. If Taylor takes off, he could find some extra yards as the New York linebackers have shown a propensity to miss with the hit stick, meaning Taylor could top this prop in one or two goes if he can shake a tackle from the Jets’ No. 30 defense.

Taylor has topped this number in each game he has started this season and could pick up some yards on third down, when the Jets tend to blitz more. This could be done as quickly as two scrambles.

The questions about Cam Newton’s arm strength are starting to get louder. Head coach Matt Rhule had to tell reporters this week that there are “no issues” with his arm after he's failed to complete a pass of longer than 19 yards since returning. Newton has dealt with multiple surgeries to his shoulder over his career and there’s a reason why no team came knocking on his door before the Panthers.

The coach also noted that the short passing game plan was on purpose and was what offensive coordinator Joe Brady had drawn up for Newton. If Newton is asked to continuously look underneath, it will be difficult for him to top his passing yard total of 215.5 yards.

Carolina sits as 2.5-point road favorites and could be playing with a lead versus a Miami offense that sits 24th in EPA/play. There may not be many reasons for Cam and the offense to take shots versus a turnover-producing defense. The Miami defense is allowing just 229 passing yards per game over its last three contests.

Newton’s passing total closed at 209.5 yards last week and sits at 215.5 this week. If Brady is going to continue to keep it short, 216 yards is going to take some serious YAC and we’re betting against that and hoping Christian McCaffrey gets more than 10 carries in Week 12.

Do you really want to Hurts me?

The Eagles are 3-1 SU in their last four and the legs of Jalen Hurts have a lot to do with that success. He’s coming off a three-score rushing performance versus the Saints and has rushed for at least 55 yards in five straight games. His confidence on the ground is growing with every ankle he breaks.

Tasked to contain Hurts will be the Giants, who made Tom Brady look like Warrick Dunn last week. The Giants create some of the lowest pressure rates in the NFL, which can help in quarterback rushing as it creates separation in the second level as the receivers get more downfield — creating open space for Hurts to take advantage of.

Of course, Hurts will also have his designed runs, as he has 31 carries over the last two weeks. Only 14 running backs have carried the ball more over that stretch.

New York's offense is going through some things with the departure of Jason Garrett, and skill players could be a rare thing for its offense as the injury list is extensive: Sterling Shepard (Out), Kadarius Toney (Doubtful), and Saquon Barkley (Questionable). Passing could be an afterthought for the Eagles and with Hurts being a huge part of the running game, his involvement should be consistent in a game where Philly is a short road favorite. 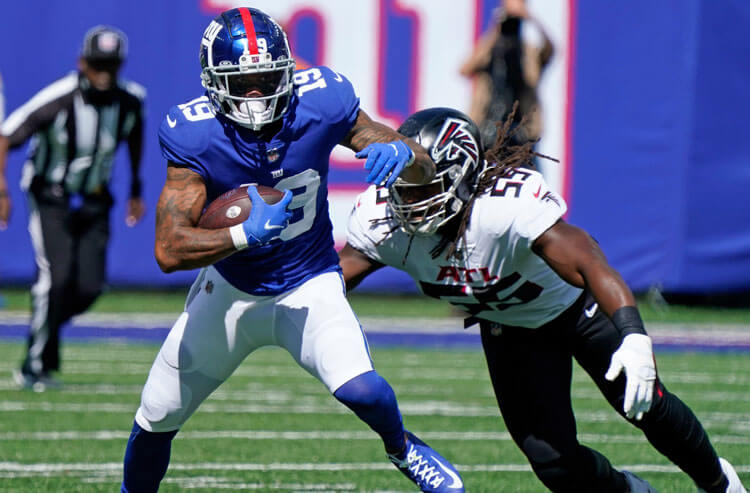