One of Cleveland or Baltimore is going to win back-to-back games for the first time in over a month, so these AFC North rivals will be eager to jockey for position in a tight division. Find out which players will help you profit with our SNF player prop pi

Sunday night, the Cleveland Browns visit their AFC North rivals, the Baltimore Ravens, as both clubs look to win back-to-back games for the first time since mid-October. Baltimore comes in as 3.5-point favorites with a total of 47 and will have Lamar Jackson under center, while the Browns should get tackle Jack Conklin and RB Kareem Hunt back.

Can the Browns lean on their power running game against the Ravens’ No. 5 rush defense? Can Lamar and the offense find some success after totaling just 26 points over their last two games? Find out in our Sunday night free props and predictions for Browns at Ravens.

The Browns offensive line will be back to near full strength Sunday night as tackle Jack Conklin is probable to suit up. The No. 6 rated tackle in run blocking, per Pro Football Focus, has been out since Week 8 and will make a formidable duo with guard Wyatt Teller on the right side of the Browns’ O-line.

The Ravens defense ranks No. 4 in success rate against the run but is susceptible to runs on the left side of its defensive line where it allows 5.34 adjusted line yards per rush, which ranks 30th in the league. The Ravens are one of the worst defensive teams when opponents run behind the right tackle and off the right tackle.

Enter the Browns backfield, which is also back to full strength, with Kareem Hunt probable to play. Nick Chubb still averaged 18 carries per game with Hunt in the lineup, and with a plethora of pass-catching injuries, the Browns may need more from Chubb this week in a pivotal divisional game.

Chubb’s rushing total sits at 80.5 yards and he's averaged 104.6 rushing yards per game with Hunt in the lineup this season. The Over 80.5 is our best play of the day even with the underdog Browns.

The Browns head into Week 12 thin at the receiver position. Anthony Schwartz is out, Donovan Peoples-Jones is highly questionable with a pair of limited practices to finish the week, and Jarvis Landry isn’t at 100 percent.

Tight ends David Njoku and Austin Hooper could continue to be the bulk of this team’s receiving options. Together, the duo received 11 of Baker Mayfield’s 28 targets last week and combined for 45 percent of the team’s WR/TE air yards.

Hooper was the busier of the two, seeing seven targets, which he turned into 4/53/0 while Njoku leads the team in receiving yards and is 8-3 O/U on this week’s receiving total of 16.5 yards. Hooper’s receiving yard total is as low as 24.5 yards and the TE has topped this number in four of his last five.

Defensively, the Ravens allow the fourth-most fantasy points to opposing TEs and give up an average of 6/69/0.4 to the position per game. We doubt Mayfield is going to take many shots down the field with a lack of healthy weapons, while also ranking in the bottom half of the league in explosive pass rate. That could open up a few more underneath targets for the TE duo, who both have an average depth of target below 7.5 yards.

We’re hitting the Over on these modest receiving props.

Last week with, Tyler Huntley under center, was not a great week to judge rookie WR Rashod Bateman, who finished with three catches for 29 yards on six targets. In three games prior to that, he totaled 14 catches for 212 yards, and could be the No. 1 passing option Sunday night for a healthy Lamar Jackson, as Marquise Brown is questionable with a thigh injury that cost him last week.

The Browns allow 1.0 WR touchdowns per game and are dealing with injuries to CBs Greedy Williams, A.J. Green and Troy Hill.

With Browns' health still up in the air, all of Bateman’s prop markets aren’t available and likely won’t be until Hollywood’s status is clearer. The rookie receiver’s receiving total opened at 37.5 yards last week and wouldn’t surprise us if it opened in the low-40’s if Brown is out. We will be hitting this Over on any number below 46 yards and, in the meantime, will be putting a little down on his anytime TD. 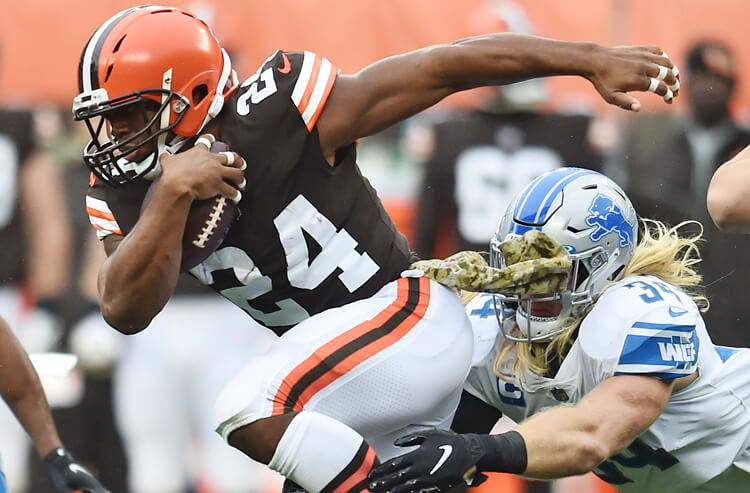