It's Turkey Day! Today's picks go all-in on Zeke and the Dallas Cowboys' run game and counting on a slow start at the Superdome as the Bills visit the Saints. Find out what else we have on our plates in our Thanksgiving Day NFL parlay picks.

Happy Thanksgiving! It's always a great time to be celebrating along with family and friends and have a little bit more betting action on the line.

Here's a look at my favorite NFL parlay picks across each of the three holiday contests.

Both teams head into this contest on short weeks and are banged up across many positions, particularly at quarterback. If healthy, Jared Goff will get the start for the Detroit Lions, and backup Andy Dalton will start for the Chicago Bears after Justin Fields suffered a rib injury last week.

Chicago's offense struggled last week – both touchdowns scored last week were done so on chunk yardage plays. They are in a tough spot against a Lions defense who have actually been keeping them in games. Points should come at a premium in this contest, as the Bears rank 32nd in passing offense, and 29th in scoring offense. The Lions have had their own struggles finding the endzone, ranking 30th in both passing yards per contest and passing offense. In a contest likely to be determined by each team’s run game, get this total now before it drops even lower.

The Las Vegas Raiders, despite starting the season out 3-0 have fallen to 5-5 and are fresh off a blowout loss to the Cincinnati Bengals 32-13, which had the spread set under a field goal. They have struggled in the run game and haven't been able to score points. On the defensive side of the ball, they have surrendered 32 and 41 points in back-to-back contests and now meet a team in the Dallas Cowboys, who rank third in scoring at 29.3 points per game.

The Cowboys will likely be without leading receiver CeeDee Lamb, who exited last week's contest with a concussion but have a solid run game with Tony Pollard stepping up in place of Ezekiel Elliot’s struggles. They will need to take advantage of that run game against a Raiders squad stout against the pass. This is a great spot for the Cowboys.

Most books still don't allow a same game parlay wager but think of this like doubling down on the Cowboys' success Thursday afternoon. For the Cowboys to be successful they will have to establish the run game - the key to that is through Ezekiel Elliott who has struggled for much of the season battling a knee injury, but this is a favorable matchup for him. His total is set low due to his limited number of attempts over the past few contests and the success of RB2 Tony Pollard.

Elliott has eclipsed his rushing total in five of 10 games this season. In the five contests he’s gone Over, he’s averaged 4.4, 5.6, 7.2, 5.2, and 5.1 yards per carry. He's in a favorable spot with the Cowboys likely to have a lead and going up against a Raiders defense giving up 132.1 rushing yards per game.

The Buffalo Bills badly want to forget last week’s disaster and re-establish themselves as one of the league's top teams. They have struggled as of late losing three of their last five contests, including a 9-6 loss to the Jaguars and this week’s 41-15 blowout loss to the Colts.

The New Orleans Saints have had their own struggles and need this one to stay in contention in the NFC South, as they’re two games back of the Tampa Bay Buccaneers. I'm staying away from picking a side outright or against the spread in this contest especially given the uncertainty of Alvin Kamara, who the Saints have been in free-fall without. Look for a low-scoring game early on with both teams looking to avoid mistakes early. The Saints struggle to put up points in the first half averaging 9.7 a contest up against a Bills squad giving up only 8.0.

Did you know that if you parlayed our Thanksgiving Day NFL parlay picks, you could win $112.65 on a $10 bet? 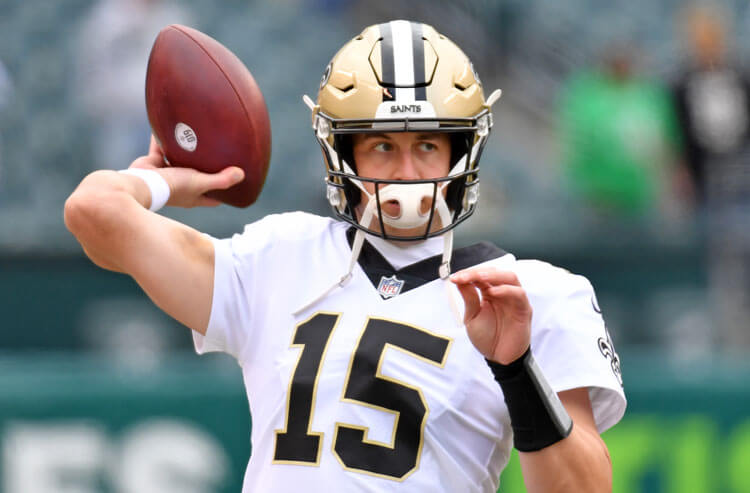