We're here with a Thanksgiving Day edition of our NFL touchdown prop picks, and we've carved up a number of selections, including our favorite longshot to find the endzone on Turkey Day. Check out the picks and read why they're worth backing this week. 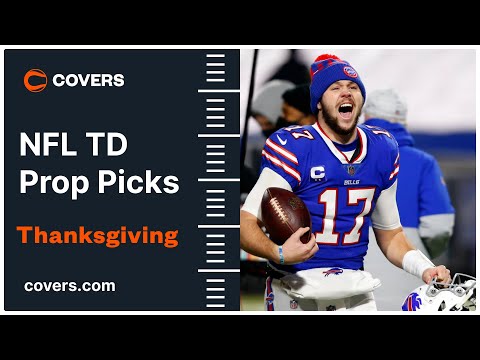 It’s Turkey time, so dig in and gorge on our Week 12 Thanksgiving Day TD props where we've been profitable in eight of the 11 weeks of the season.

D’Andre Swift has rushed for 130 yards in back-to-back weeks and finally hit paydirt in Week 11 versus the Browns which was his first in three games. The Detroit offense ranks 31st in EPA/play but Swift has accounted for 49 percent of the team’s total yards over the last two weeks and faces a Chicago defense that could be missing Akiem Hicks again and has given up 33 rushes of over 10-plus yards which is the fourth-highest rate in the league.

Jared Goff could be out Thursday which means the Lions could lean on Swift even more with Tim Boyle under center — he was unwatchable versus the Browns last week and finished with 77 passing yards.

Getting into the red zone will be tough for this Detroit offense but the Bears do allow 3.8 red-zone trips to opponents per game which is a bottom-10 mark. Chicago also allows 1.1 RB TDs per game on the year — 0.7 rushing and 0.4 receiving.

Looking at Swift’s early TD prices, this is as low as +115 (FD) and as high as +150 (Bet365). Swift has closed at near even money for an anytime TD over the last week and paid +140 versus the Rams four games ago. The +150 price tag makes this our best TD play for Thursday’s early game which shouldn’t feature a ton of scoring, pushing us to play a more favored TD than looking for the big money ones. It’s a 1.32-unit play for us to win two units.

The Raiders rank 20th in success rate against the run and allow 1.2 running back TDs per game. They give up 142 total yards to opposing RBs per contest and have been susceptible to RBs in the passing game (5.4/39.2/0.4).

The Dallas running game could also get a huge boost with Tyron Smith possibly returning. Smith is one of the best tackles in the game and grades as one of the best at his position in run blocking.

There is zero value in an Ezekiel Elliott TD that is priced as low as -190. Elliot was also listed as limited Monday with a knee injury that has been bothering him since Week 9. No. 2 RB Tony Pollard is taking roughly 38-40 percent of the snaps over the last three games and looked like the more explosive back last week as he outgained Zeke in yards 50 to 32 on the ground.

The Cowboys are heavy 7-point favorites and are favored to play with the lead on Thursday. Pollard could see even more action if Zeke’s workload is scaled back to manage his knee on the short week.

Pollard’s TD price is +175 which isn’t the best price for a No. 2 RB, but his play and role have been improving over the last two games and with Dallas possibly without Lamb and Cooper, the ground game should be the focus point versus the Raiders. Joe Mixon rushed for two TDs versus Vegas last week as the Raiders have given up 73 points over the last two weeks. It’s one unit for us.

The Raiders are the biggest underdogs on the board Thursday. Their defense has forced the team to go pass-heavy of late as Las Vegas has passed the ball at a 67.5 percent rate over the last three weeks and Josh Jacobs has totalled just 53 yards on the ground over the last two. The Raiders could be in pass mode again Thursday as 7-point dogs which has us combing through WR/TE touchdown props.

Over the last three weeks, Hunter Renfrow leads all Vegas receivers in targets per route run (0.26) and targets (18). Renfroe isn’t a huge target in the end zone and his 3.2 aDot proves he’s a possession receiver but the slot man leads the team in RZ targets over the last three games with five and he’s hauled in four of those for a pair of TDs.

This is a game-script TD bet that offers a little value with Renfrow at +225 at Bet365 while other books have him as low as +170. He has regularly closed at +170 to +180 over the last three games. Renfrow is a one-unit play for us.

Additionally, No. 2 TE Foster Moreau is one of our favorite longshot TD bets this Thursday. Moreau had a TD last week (+1000) and had two RZ targets. If you’re looking for a bragging rights TD, Moreau could be your guy at +700 as Vegas has the highest probability of passing percent on Thursday. He’s worth a sprinkle at 0.33 units to win 2.3 units.

Thursday football concludes with the Buffalo Bills visiting the New Orleans Saints as 4.5-point favorites. Jalen Hurts just racked up a hat trick of TDs on the ground versus this New Orleans defense in Week 11 and with Josh Allen struggling to dominate through the air, the Bills' QB getting things going on the ground may be an option Thursday.

No team allows more passing TDs at home than the Saints (2.7) but Allen hasn’t thrown more than two TDs in four straight weeks which includes games against MIA, NYJ and JAX. We’re avoiding the Buffalo passing attack and are hitting the legs of Josh Allen who has three rushing TDs to date after rushing for six scores last season at this time.

Allen has one Thanksgiving day game under his belt in 2019 where he beat the Dallas Cowboys on the road. Allen ran in for one score in that game and facing a Saints’ defense that ranks second in the league in red-zone scoring percentage against this Thursday,  Allen may have to improvise when the field shrinks and put this slumping team on his shoulders.

FanDuel is posting a +180 Allen TD which is the best price on the board. Allen’s TD price has not closed higher than +170 all season. It’s a 1.15-unit play to win two units.