Chicago's passing game has looked suspect behind Justin Fields, putting more of an onus David Montgomery to move the chains. Against a leaky Texans run D, our NFL picks like the Bears back to have big Sunday.

The Houston Texans seek their first straight-up win of the season as they head to Soldier Field to take on the Chicago Bears.

The Texans are 2-0 against the spread following a tie with the Indianapolis Colts and a one-score road loss to the Denver Broncos. The Bears split their first two tilts of 2022 both straight-up and against the spread, beating the San Francisco 49ers at home before suffering yet another loss at Lambeau Field to Aaron Rodgers and the Green Bay Packers.

What will transpire in this potentially low-scoring contest? Find out in our free NFL picks and predictions for Texans vs Bears on Sunday, September 25.

Texans vs Bears picks and predictions

The Bears’ new management — namely GM Ryan Pace and head coach Matt Eberflus — have seemingly given quarterback Justin Fields a vote of no confidence. After recording only 17 passes in a rainy Week 1 affair, Fields fell to a mere 11 throws in a losing Week 2 effort.

With significant wind in the forecast and the potential for precipitation later in the tilt, bettors should expect Fields to once again play second fiddle to running back David Montgomery. The talented tailback’s rushing total has been set relatively low, so prop bettors should pounce.

Montgomery was kept contained by the 49ers’ stoppers in Week 1, accumulating only 26 yards on the ground on 17 carries. But we saw the Montgomery we’ve become accustomed to in Week 2, as he scampered for 126 yards on 15 attempts against Green Bay, serving to keep Chicago relatively competitive in a losing effort.

The Iowa State product had a down year in 2021 — possibly due to injury, as he missed three games. Montgomery rushed for over 100 yards twice before hitting the shelf in October, and wasn’t really the same after that, peaking at 90 yards on Nov. 9. But in 2020, he crossed the 65-yard plateau in each of his last six games.

Montgomery will have the benefit of running against a Texans defense that allowed 163 rushing yards per game through two weeks, the third-worst mark in football in that span. They were carved up for 161 yards by the Colts’ Jonathan Taylor in Week 1 before the tandem of Javonte Williams and Melvin Gordon took Houston for 122 combined yards in Week 2. This unit clearly has its work cut out for it containing Montgomery in Week 3.

A) Brandin Cooks Over 74.5 receiving yards + to score a touchdown BOOSTED to +420 at Caesars! Bet Now

These two teams appear evenly-matched, and it feels like a field goal could decide things. Taking the full three points with the Texans looks like the way to go.

Fields will likely struggle to move the chains through the air for Chicago. He’s attempted only 28 passes for the Bears through two games — completing just 15 of them — with two touchdowns and two interceptions. Montgomery can only carry their offense so far.

Davis Mills has had limited success in his sophomore season for Houston, going 42-for-75 passing with 417 yards and two touchdowns. The Windy City is expected to live up to its name on Sunday, so the Texans could lean on rookie running back Dameon Pierce to keep the chains moving. He’s yet to find the end zone in 2022 but has shown some promise, gaining 102 yards on the ground on 26 carries.

Pierce could enjoy running against a Bears defense without Roquan Smith, as the star linebacker is considered questionable for this one with a hip injury.

Though these two defenses have struggled so far in 2022 — with each ranking in the Bottom 10 in yards allowed per game — the Under looks like a strong play.

Both the Texans and the Bears have stumbled out of the starting gate offensively, with each offense averaging only 14.5 points per game. Neither club was particularly adept at piling up points last season, with Chicago mustering only 18.3 per game (27th), and Houston averaging 16.5 (30th).

Mills and Fields each have very limited perimeter weapons to attack the opposing defense with. Beyond Brandin Cooks, the Texans’ next four wide-outs on the depth chart have a total of 20 touchdowns over 17 NFL seasons.

The trends strongly suggest that the Under is the way to go, even against this low total. The Texans have gone 7-1 to the Under in their last eight road games, while the Bears have gone below the total in 21 of their last 28 home games.

The Texans are 11-5 ATS in their last 16 games after scoring fewer than 15 points in their previous game. Find more NFL betting trends for Texans vs. Bears. 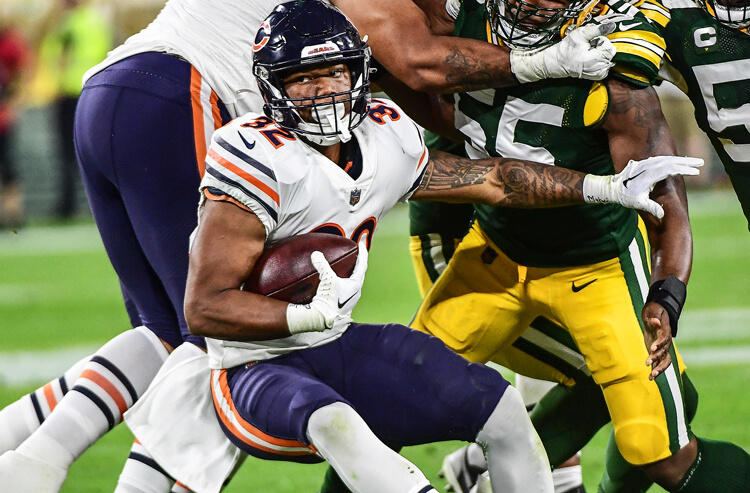 Texans vs Bears Week 3 Picks and Predictions: Montgomery Shows Out for Stagnant Chicago Attack
Provided by