There's a number of big favorites for survivor poolies this week, and Jason Logan's selection is going with one of those teams... even if the Patriots are 2-4 on the season. See why he's backing Belichick & Co. in his Week 7 Survivor Pool picks.

For the second straight Sunday, both of our NFL survivor pool picks — savvy and safe — were spot on. The latter of those two categories advancing to Week 7 of the schedule unblemished.

We still have more than 80 percent of the 32 teams at our disposal but with fortunes flipping and injury reports growing by the game, selecting a solid survivor pool pick is getting trickier — even when leaning on those big favorites... And boy do we have some big-ass faves in Week 7.

Here are my Week 7 survivor pool picks — savvy and safe — as well as one team to avoid. Good luck.

The Patriots showed some real marbles in a wild overtime loss to the Cowboys last Sunday. But while it went down as a defeat, that tight contest was a unifying battle for New England and a rapid maturation for rookie QB Mac Jones.

The Patriots stay home in Week 7 hosting the Jets — a team they blasted 25-6 in East Rutherford in Week 2. New York is coming off a bye week after playing in London in Week 5, dropping to 1-4 with that neutral-site loss to Atlanta.

New England boasts an implied win probability of 76.19 percent for this AFC East grudge match, with the Patriots winning 12 straight home games against Gang Green going back to 2009. While we usually dance around the more popular survivor pool picks in this section — and the Pats are drawing more than 14 percent of picks in Week 7 — we can’t deny the value we’re getting with a 2-4 team.

This isn’t the highest win projection on the board but allows us to save some hefty faves like Arizona, Green Bay, Tampa Bay, and the L.A. Rams for further picks down the road, including those standalone holiday slates on Thanksgiving and Christmas (if your pool is into that sort of thing).

The Cheeseheads didn’t walk over Chicago last week but broke the Bears in the fourth quarter to improve to 5-1 and now head back to Lambeau Field for just the third time this season, hosting Washington in Week 7.

The Packers have a win probability of 80 percent on Sunday, which is pretty safe. The wild thing is that that projection is the fourth-highest win probability on the board, behind Arizona, the L.A. Rams, and Tampa Bay. We’ve already burned up the Rams and Bucs with our safe selections in the opening two weeks and want to save the Cardinals for their Xmas Day clash with the Colts.

Green Bay is drawing the second-highest percentage of picks in Week 7 at 17.6 percent, however, with Arizona attracting an incredible 47 percent of survivor pool selections — so we feel pretty smart and safe with this move.

Here’s a look at the Top 5 favorites, in terms of moneyline odds and implied probability, for Week 7:

With so many big favorites on the board in Week 7, survivor poolies shouldn’t try to overthink this week’s selection. But, if you’re one of those folks who can’t get out of your own way (or you already blew your wad on all those top-tier teams), stay clear of the Raiders.

Las Vegas is coming off a drama-loaded Week 6 in which it gave its head coach the boot in the wake of some pretty terrible emails, then rallied around the locker room and scored a big divisional road win in Denver last Sunday. Something smells like a letdown…

This week, the Silver and Black are back home facing a media frenzy, as well as a Philadelphia Eagles team coming off a mini bye after playing last Thursday. Las Vegas has a win probability of 61.54 percent yet is showing up in less than 1 percent of survivor selections. That’s for a reason. 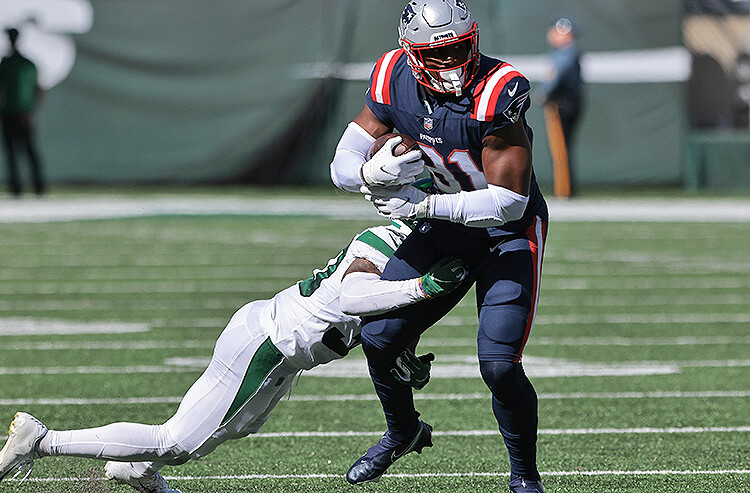 2022-23 NFL MVP Odds: Allen Emerges as Favorite Amid Chaotic Offseason
Trevor Knapp | May 24, 2022
About Us
Contact Us
Careers
Our Team
Brand
Testimonials