While the Pittsburgh Steelers may be destined to be one-and-done in Ben Roethlisberger's final chapter, Diontae Johnson will ensure it's not a total bust against the Chiefs. We like Johnson as part of our best prop bets for this Wild Card match. 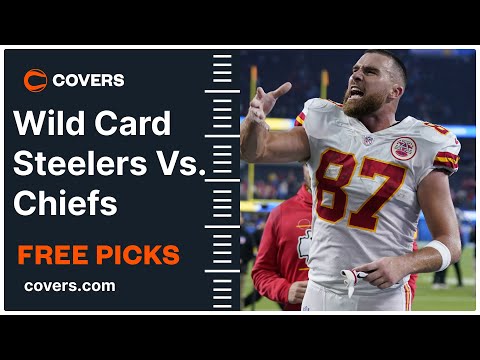 Last Sunday, the unthinkable happened as the Colts lost to the Jaguars and opened the playoffs up to one unsuspecting team. It was Mike Tomlin and his Pittsburgh Steelers that came out of Sunday as the real winners.

The Ben Roethlisberger story didn’t end as many expected and he’s been gifted one last playoff run. Can he really pull off a shocking win over the Kansas City Chiefs and turn this incredible story into a fairytale? Don’t miss out on our Wild Card prop bets and same-game parlay for the Pittsburgh Steelers vs. Kansas City Chiefs.

Ben Roethlisberger making the playoffs in his final season sounds like the start of a Hollywood movie. It's the story of an aging QB rallying one last time against Father Time and his own noodle arm. Because as Big Ben has grown older, his arm strength has deteriorated very quickly.

This season has seen his average depth of target fall to just 6.7 yards, the lowest of his career, and it’s abundantly clear that he's no longer capable of reaching his past heights. That’s been an issue for the Steelers as a team but for one man it’s potentially been a boon. Diontae Johnson has become the team's top receiver, lining up all over the field and often catching short passes from Big Ben.

Johnson leads the team with 107 receptions on the season. Running back Najee Harris is second with 74 catches, more than 30 behind Johnson. Tight end Pat Feiermuth and fellow receiver Chase Claypool are next with 60 and 59 receptions, respectively. Johnson's Roethlisberger’s safety blanket. He’s had at least seven receptions in six of his past nine games and was targeted a whopping 100 times in those games. You can be confident that Roethlisberger will lean on the former Toledo man in an attempt to extend his career by one more game.

There was some discussion earlier in the season that, like the aforementioned Roethlisberger, perhaps Chiefs TE Travis Kelce was beginning to show his age and that he might not be an integral part of Kansas City's game plan anymore. He went through a four-game drought in November and early December without finding the endzone, but then it all changed and Patrick Mahomes started leaning on old faithful once more.

In the past three games, he’s scored four touchdowns and looks again to be a key component of the Chiefs offense. Kelce's not the target hog he’s been at other times in his career, but he’s still able to produce with the targets he’s given. In what looks like a blowout win over the Steelers, you can be confident that Kelce will score. And it’s a great bet at even money.

From fairytale to nightmare

The Chiefs defense might not feature one of the league’s most imposing secondaries, but they’ll be licking their chops at the prospect of facing the ancient Roethlisberger. Big Ben has only thrown 10 interceptions this season but eight of those have come in his past seven games.

When these teams last met less than a month ago, the Chiefs managed to pick him off. With a game script that will likely see Roethlisberger throwing a lot, and with plenty of desperation, it feels like a lock that we’ll see his end-of-career fairytale descend into a nightmare.

Same-Game parlay for Steelers vs Chiefs

If this game goes as most expect, we’re going to see the Chiefs win by a wide margin. As mentioned above, that’ll see Travis Kelce back in the endzone continuing the great run he’s been on.

I also expect Byron Pringle to add to his tally of five touchdowns on the season. There have been question marks surrounding Tyreek Hill, who was suffering from a heel injury last week, and he might be used more sparingly even if he is fit to play. That opens things up for Pringle, who caught six passes for 75 yards and two touchdowns when these two met in Week 16.

Finally, to top up the value of the same-game parlay, we’re adding the Over on Pat Freiermuth’s receiving yards. The rookie has been a great addition to the Steelers lineup and has exceeded the 30.5 line in seven of his past nine games. With Roethlisberger likely attempting a lot of passes, this feels like an easy addition.