The start of the Trey Lance era was nearly rained out last week. As the 49ers look to rebound against the Seahawks in Week 2, these teams are again looking at rough conditions — our NFL betting picks highlight how it'll impact things.

The Seattle Seahawks spoiled Russell Wilson's first game with his new team on Monday Night Football last week and now set their sights on the San Francisco 49ers, who had an ugly loss to the Bears in a monsoon at Soldier Field.

Yet despite these opposite results creating a massive gap in public perception of these two teams, the 49ers as of this writing are still double-digit favorites for this Week 2 matchup between NFC West foes.

So, what is exactly going on here and where is the value? We break it down with our Seahawks vs. 49ers NFL picks, with kickoff on September 18.

Seahawks vs 49ers picks and predictions

Starting with the Niners, it's important to not get too caught up in the results of extreme weather games.

So yes, while San Francisco's loss last week as six-point favorites surely leaves a sour taste in the mouths of its spread and survivor backers last week, it's important to not give too much weight to that performance. If anything, given the small sample size of one game in said conditions, it'd be better to side with preseason priors than anything else.

On Seattle's side, it certainly deserves all the credit in the world for sticking it to Wilson as six-point underdogs, but it's more than fair to assume that there was a little extra juice there for Pete Carroll and company — whether it was a motivational element or the familiarity element of knowing Wilson's tendencies and weaknesses.

So, how do we tackle this game? What do we know about these two teams and how can we leverage that into a value proposition?

The Niners did rank a concerning 21st in explosive pass rate allowed, but that was more a result of extensive injuries more than anything. They missed the fourth-most adjusted games lost on the defensive side of the ball last year, a metric courtesy of Football Outsiders that tries to accurately quantify injuries in terms of player impact.

On the other side of the ball, neither team is rather inspiring either. While he deserves a mulligan for Week 1 given the conditions, Trey Lance has yet to show a consistent floor when it comes to offensive production.

In his two starts last year, he combined for a 2:2 TD:INT ratio and managed less than 300 yards of production per game despite posing as a threat with the deep ball and on the ground. That's not to say he can't get there someday (he is to his credit still only 22 and is a full-fledged starter for the first time since 2019), but the current iteration does not inspire much confidence.

While the public may be high on Geno Smith following his electric performance on Monday Night Football, he hasn't exactly lit up the scoreboards when taking snaps for Seattle. In fact, in his five games across the last year, he has eclipsed 200 passing yards just once (and just barely, with 209) and has averaged just 179.4 passing yards per contest. The Seahawks have managed to average just 19 points in those contests.

Longtime NFL bettors know that any double-digit spread in a divisional game is something to always look out for. And although the spread has since moved to 49ers -9, the big spread still warrants some questioning.

Even if in theory San Francisco can manage to get out to a big lead early, it may not be able to extend that lead further or even maintain it if it decides to lean on the run game. To the 49ers’ credit, they did rank third in the league in rush offense DVOA last year, but Seattle ranked eighth last year in rush defense DVOA. And if Seattle has to play catchup and air the ball out, the Niners' defense only ranked around league average in pass defense DVOA.

With the total set at a relatively low 41, there isn't exactly much room for the Niners to tack on a big enough lead to safely cover the spread with a potential garbage time backdoor score. In fact, the combination of the total and spread project a score of something like 24-17 or 27-14, the former which would be inside the number and the latter just intuitively being too lopsided of a game to confidently project occurring, all things considered.

It's very by the books, but the Seahawks would be the better side here for the spread.

As it was laid out in the best bet section, the clear value proposition with the total is the Under. On top of the Seahawks only managing just 19 points on average in Geno's starts as of late, the 49ers have also had extensive trouble putting up points in Lance's starts.

His most impressive scoring output was the 23 points they scored in their win against the lowly Texans in his Week 17 start last year. The Niners scored just 10 points in his only other start last year and 21 in the game the week prior during which he took over around the halfway mark.

So, all in all you have two quarterbacks piloting versions of their respective offenses that have had poor scoring outputs in the past and two coaches that love to lean on the run game going against two rush defenses that were stout last year and you have all the makings for a low scoring affair.

The Seahawks have won four straight against the 49ers and have won 15 of the last 17. Find more NFL betting trends for Seahawks vs. 49ers. 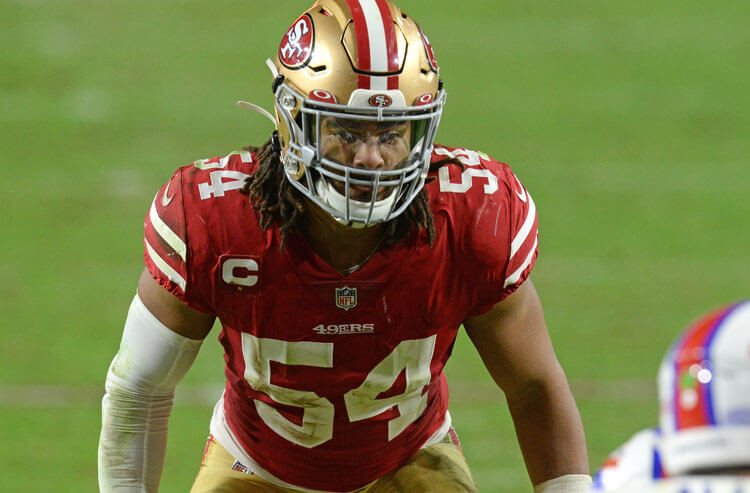