Rams vs Cardinals Week 3 Picks and Predictions: LA Brings Arizona Back Down

Arizona won its first game of the season last week in a thrilling comeback but now has to face an LA team that has ruled this series. Despite the Rams not playing perfect football, our NFL betting picks trust the well-rounded champs vs. the Cardinals.

The Cardinals rallied to get their first win against the Raiders last weekend, while the Rams held off a second-half charge from the Falcons to claim a 31-27 victory.

Each of these teams will look to build momentum with a second straight win, but only one will move to 2-1 on the season. We’ll break down who has the edge in our NFL picks and predictions for Rams vs. Cardinals on September 25.

Rams vs Cardinals picks and predictions

The Rams opened their Super Bowl title defense in lackluster fashion, as the Bills blew them out at home 31-10 in Week 1. It looked like Los Angeles had turned the corner in Week 2, as it took a 28-3 lead against Atlanta before nearly coughing up the lead.

That said, the Cardinals haven’t been any better to start the year. The Chiefs came into Arizona and demolished the Cardinals 44-21. Arizona nearly dropped to 0-2 last week before overcoming a 20-0 half-time deficit to beat the Raiders 29-23 in overtime.

To put it lightly, these are two teams with a lot of questions to answer heading into Week 3. But there are a couple of sure things on the Los Angeles side of the ball that have me backing it in this matchup.

First, while it would be great if quarterback Matthew Stafford could spread the ball around more, he can always rely on Cooper Kupp. Stafford and Kupp have already connected on three touchdowns this year. While Stafford threw three interceptions against the Bills, he looked much better against Atlanta and should have plenty of opportunities against an Arizona secondary that grades out as the worst coverage unit in the league, according to Pro Football Focus.

If the Rams can do one thing on defense, they can generate a pass rush. Aaron Donald remains an absolute terror to opposing quarterbacks, even if he has only picked up one sack this year so far.

That will cause problems for Cardinals quarterback Kyler Murray. While Murray has played fairly well this season, throwing for three touchdowns and running for another while only giving up a single interception, his numbers drop precipitously when facing a pass rush. His passer rating is a concerning 35.4 when under pressure, compared to 103.3 when he enjoys a clean pocket.

With Cardinals defensive end JJ Watt still struggling to recover from a calf injury, Arizona’s defense could struggle mightily to keep Stafford and Kupp in check. On the other hand, the Rams' pass rush should be able to slow down an Arizona attack that may be even more pass-reliant than normal if running back James Conner is limited by his ankle injury.

The Rams are the smart play here. Even on the road, they have the advantage over the Cardinals on both offense and defense and should be able to turn that into a comfortable margin of victory. I’m on Los Angeles, and I’m happy to give a few points rather than take the moneyline.

The line in this game has been stable over the past week, coming down just a half-point from an opening number of Rams -4 to a 3.5-point spread. While it might be surprising to see Arizona as a home dog of more than a field goal, the recent history between these teams justifies that number.

The Rams last faced the Cardinals in the first round of the playoffs last season, with Los Angeles cruising to a 34-11 victory. The teams split their regular season matchups in 2021, with the Cardinals winning 37-20 in Los Angeles in Week 4, before the Rams returned the favor in Week 14, winning 30-23 in Arizona.

What changed from that first meeting to give the Rams the advantage? Los Angeles held Kyler Murray in check, as he threw for no touchdowns and a combined four interceptions in the Week 14 and playoff matchups. Aaron Donald combined for 3.5 sacks in those two games, and the Rams sacked Murray six times in total as they kept him under constant pressure.

On the other hand, the Cardinals did little to slow down the Rams' passing attack. Stafford threw for five touchdowns with no interceptions in the last two meetings between these teams. With Arizona allowing 302 yards per game in the air this season — second worst in the NFL — I expect the same story to play out on Sunday.

While the books opened this game at 51 points, the total has come down to 48.5 over the course of the week. Digging into the data, there are some signs that this could be a lower-scoring game than you might expect at first glance.

The Rams have hardly been scoring at will over the first two weeks of the season. Los Angeles is averaging just 58.5 yards per game on the ground, meaning the team is leaning on Stafford to generate scoring in the air. That’s been somewhat effective and is the right plan against Arizona. But if Kupp remains the only big play threat, the Rams will struggle to be more than a middling offensive team this year.

The Cardinals have scored a bit better, averaging 25 points per game, but that’s still far from elite. Arizona is only putting up 347.5 yards per game of total offense so far this season, a number that ranks 16th in the NFL.

As I discussed above, the Rams’ defense matches up very well against the Cardinals’ offense. Their pass rush, in particular, should give Murray fits, as it did in their final two meetings last season. While Los Angeles should have the better of this matchup, neither team will be able to turn this into a shootout, so I’d lead towards the Under here.

The Rams are 9-1-1 ATS in their last 11 meetings with the Cardinals. Find more NFL betting trends for Rams vs. Cardinals. 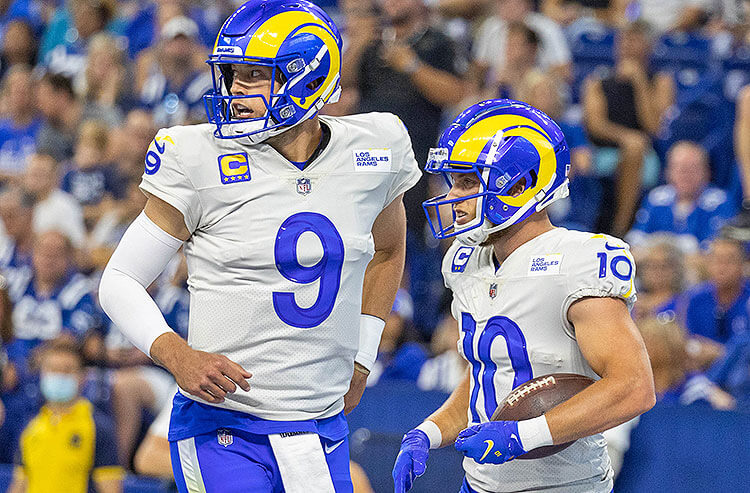 Rams vs Cardinals Week 3 Picks and Predictions: LA Brings Arizona Back Down
Provided by