It wasn't a good showing for Baker Mayfield in his season debut with Carolina. We plan on fading his success on Sunday against the Giants with a familiar defensive coordinator pacing the sidelines. Read more in our Panthers vs. Giants betting picks.

A gutsy call from new head coach Brian Daboll has the New York Giants on a high entering Week 2’s home game with the Carolina Panthers.

Daboll dialed up the 2-point conversion to give New York an upset win in Tennessee. Carolina couldn’t come out on the right side of its nail-biter with Cleveland, losing 26-24 on a last-second 58-yard field goal.

Those slim outcomes have the Week 2 odds looking different than the lookahead lines set back in the summer. We break down that point spread, as well as the Over/Under total, and give our best NFL picks and predictions for Panthers at Giants on September 18.

Panthers vs Giants picks and predictions

Baker Mayfield’s debut for the Panthers fell flat, with the quarterback posting a passer rating of just 84.7 and finishing Week 1 with a 59% completion rate, one touchdown, and an interception. While his second-half efforts improved, 75 of his total 235 yards came on one play midway through the fourth quarter.

All the blame can’t be on Baker, though. Carolina’s offensive line struggled to protect him against the Browns' pass rush. Mayfield was sacked four times, and the Panthers' offensive line walked out of Week 1 ranked 30th in pass block win rate at ESPN (43%). To add to that, Mayfield at five passes swatted down at the line of scrimmage, and snap exchanges were messy, with Baker being tagged for four fumbles on the day.

Mayfield faces an old AFC North foe in Week 2, with former Baltimore defensive coordinator Wink Martindale taking over the stop unit in New York. His blitz-happy, man-to-man schemes were on full display against the Titans, with the G-Men bringing extra pass rushers on almost 49% of snaps — second highest across the league.

They had only one sack in that game but also registered four QB knockdowns and finished with a pressure rate of 31.4%. Mayfield struggled massively against Martindale during his tenure in Cleveland, with the QB going 3-5 in eight starts against Baltimore and throwing for only 192 yards or less in three of his last five outings.

Baker owns a career rating of 83.2 versus Martindale’s Ravens, completing only 58.4% of his passes, suffering 10 sacks, and throwing nine interceptions in those eight meetings. Mayfield is also notoriously shaky under pressure. Last season, he completed less than 42% of his throws when feeling the heat, and his yards per attempt dropped from 7.4 in a clean pocket to just 6.5 in those situations as well.

With the Panthers’ new-look offensive line still coming together and RB Christian McCaffrey likely to see more carries than the modest 10 runs he had in Week 1 in an effort to take pressure off Mayfield, Sunday will be a down day for the QB's passing totals.

A) Saquon Barkley Over 149.5 rushing+receiving yards and anytime touchdown BOOSTED to +420 at Caesars! Sign Up Now

The look-ahead line for this Week 2 matchup was at pick’em in the summer. The official opener, after those Week 1 results, installed the Giants as high as 2.5-point home favorites with early money walking those spread down as low as -1 at some offshore markets.

There are, however, plenty of N.Y. -2 and -2.5 lines still out there. DraftKings was reporting 56% of bets on the Giants and 76% of the handle riding on the home team in the first 48 hours of action. Our Covers Consensus shows 63% of picks on the G-Men.

The Over/Under total was set at 42.5 points over the offseason, and oddsmakers re-opened this Week 2 number at 43 points, where most books still stand with a few 42.5-point totals available.

Covers Consensus shows 56% of picks leaning to the Over while DraftKings is reporting 60% of tickets and 72% of the early money also jumping on the Over. 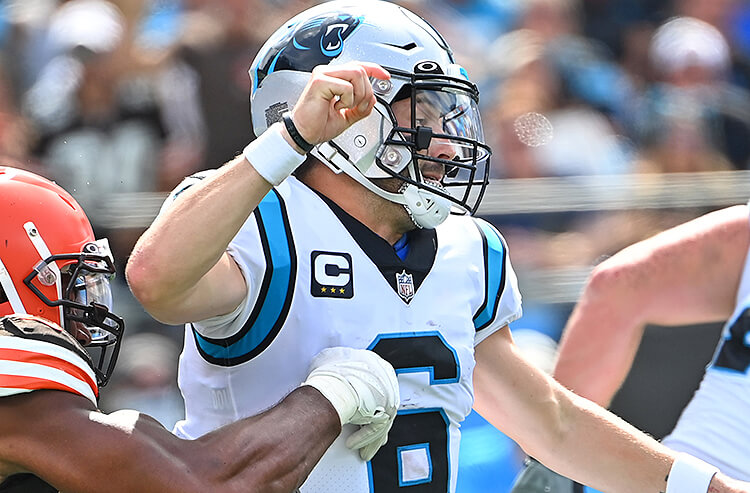