Despite Aaron Rodgers' incredible touchdown-to-interception ratio over the last decade, he has thrown his fair share of picks against Tampa Bay. This week might present an opportunity to cash in on another at juicy plus-money odds — read more below.

Neither the Green Bay Packers nor the Tampa Buccaneers come into their Week 3 meeting with a healthy group of talented receivers.

The total is dropping and the side is moving to a pick'em. Tom Brady is looking frustrated under Todd Bowles’ offense but I’m looking at the inexperienced Green Bay receiving corps for a plus-money prop.

Find out what that is in my free NFL picks and predictions for the Packers vs. Buccaneers.

Packers vs Buccaneers picks and predictions

With all the talk about Tom Brady and his lack of passing weapons heading into Week 3, the real value might be on the other side with Aaron Rodgers.

Sammy Watkins, Allen Lazard, and Christian Watson were downgraded to DNP on Thursday’s practice and although this is likely just rep management from Matt LaFleur, this thin receiving corps is not near 100% healthy.

Watson (a rookie) and Watkins (free agent) are new to the offense and no Green Bay receiver had more than a 67% snap share in Week 1. This is a very inexperienced group that has been a revolving door with seven wideouts getting snaps.

That's not a great thing for Rodgers who has historically struggled with interceptions in Tampa. Of his four 3-INT games in his career, two have come in Tampa Bay. In total, he has nine INTs over five games vs. the Bucs and will likely be forced to pass downfield with Todd Bowles expected to limit the Green Bay running backs from the offense.

This receiving group could certainly cause an interception and it was Randall Cobb in Week 1 that failed to win a 1-on-1 battle that resulted in Rodgers’ only passing turnover of the season.

The Bucs lead the league in sacks with 10 so pressure will be an issue while the Tampa defense also has four picks on the year. Rodgers has been slightly more aggressive this season (16.9%) than last year (16.2%) on throws with less than 1-yard of separation but is doing it without Davante Adams.

With all of that said, the +220 price is ultimately the deciding factor here. If this price were even money, I’d go the other way, but facing a tough defense coupled with an inexperienced receiving group and a game script that might lead to more passing, I’m taking the over on Rodgers’ interceptions.

The +210 price tag indicates an implied probability of 28% where THE BLITZ projects this at 66%.

The Bucs were -2.5 on the look-ahead but thanks to some injury concerns and a good showing by Green Bay on Sunday night, the line is moving towards a pick‘em.

Tampa comes into this game with a big list of injuries with Julio Jones and Chris Godwin doubtful after missing practice on Thursday while Mike Evans is suspended. This is a passing game that will be led by Scotty Miller, Russell Gage, and Brashod Perriman while also signing Cole Beasley this week.

Todd Bowles has turned this offense into a heavier rushing attack as Tampa is running the ball at a 50% rate this season after being the heaviest pass team in 2021 under Bruce Arians. With the personnel, it could be another run-heavy attack vs. one of the best secondaries in football.

Green Bay got the offense rolling against a bad Chicago team in Week 2. Getting right tackle Elgton Jenkins back was huge for Matt LaFleur’s offense as the Packers had the best adjusted line value when rushing the ball off the right tackle in Week 2, per Football Outsiders.

That could be a point of attack for Green Bay as the Buccaneers sit 25th in ALV vs. the right tackle this season and have not looked great vs. the run to open the season against the Saints and Cowboys. Tampa sits in the Bottom 5 in success rate and EPA per rush.

Aaron Rodgers has a better supporting cast around him coming into Week 3 (mainly AJ Dillon and Aaron Jones) and Tom Brady’s frustrations represent a team struggling on offense under a new defensive-minded head coach.

This total opened at 48 on the look-ahead but has seen nothing but Under action as it sits at 42 as of Thursday. The offensive injuries at WR for the Buccaneers are the biggest reason for the Under love.

Some sites are calling for rain but Dark Sky is predicting little to no precipitation with temperatures feeling close to 100 degrees.

Looking at the pace of play, which is always critical when looking at totals, Green Bay is the second-slowest team in football through two weeks while a frustrated Brady is getting off a play every 28.24 seconds which is about league average. The Bucs haven’t trailed this season so their pace numbers are slightly skewed.

Ultimately, this is a game that will feature some poor weapons in the passing game on both sides. Sammy Watkins had a big game in Week 2 but judging his performance vs. the Bears is questionable. He had a dud in Week 1 when the Packers were trailing. He was also limited at practice as was Allen Lazard.

This game could see a ton of ground game with the Bucs leaning on Leanard Fournette while the Packers continue to split the usage of Aaron Jone and A.J. Dillon who played plenty of snaps at the same time last week.

The Under is 8-2 in the Buccaneers' last 10 vs. the NFC. Find more NFL betting trends for Packers vs. Buccaneers. 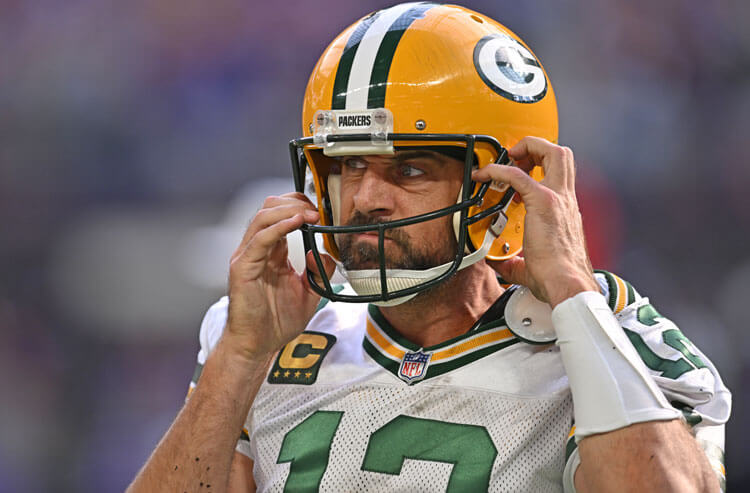