The Detroit Lions are in Minnesota following a Week 2 victory over Washington. Led by star running back De'Andre Swift, we like the Lions' offense to be humming on Sunday. Read more in our Lions vs. Vikings betting picks.

Week 3 in the NFL features an NFC North clash between the Detroit Lions and Minnesota Vikings.

Minnesota is coming off a poor showing on Monday Night Football and will look to bounce back on a short week against a young and hungry Lions squad. NFL betting lines opened with the Vikes as 7-point home favorites, but that line has since slimmed to -6.

Here are our best NFL picks and predictions for Lions vs. Vikings on Sunday, September 25.

Lions vs Vikings picks and predictions

Detroit has put up more than 30 points in back-to-back weeks, and it's becoming apparent that this is capable of being an explosive offense.

Jared Goff might not be a game-breaker at quarterback, but he's more than capable of taking care of the ball and being accurate on short to intermediate routes. Amon-Ra St. Brown has also emerged as a reliable target and tied the NFL record for most consecutive games with eight or more receptions last week.

T.J. Hockenson is a sure-handed tight end, while D'Andre Swift is a dynamic back that rushed for 144 yards in Week 1 and looked electric in limited snaps last week, despite dealing with an ankle injury.

Minnesota's defense looked good against a flat Packers attack in Week 1, but the vulnerabilities in Ed Donatell's new 3-4 scheme were exposed last weekend. His two-deep safety shell takes away downfield passes but can leave holes in the middle, which this Detroit offense is perfectly built to exploit.

Look for the Lions' offensive resurgence to continue and take the Over 22.5 on their total points.

Matchup math doesn't always work, but it's still worth mentioning that while the Lions were able to keep things close in a 38-35 Week 1 loss to the Eagles. Meanwhile, the Vikings were smothered 24-7 against that same Philadelphia squad last week.

Kirk Cousins had another Monday Night Football meltdown with three interceptions, while the defense was shredded for 323 yards through the air and another 163 yards on the ground.

The Vikes' defense did look better in Week 1 when they held Green Bay to seven points. That said, the Packers were missing both their starting offensive tackles in that content and rolled out a pathetic group of wideouts, led by fourth-round draft pick Romeo Doubs.

As strange as it sounds to say, Detroit's offense actually has more weapons than the Packers (with Swift, St. Brown, and Hockenson), along with a pair of strong offensive tackles in Taylor Decker and Penei Sewell.

The Lions bounced back from their Week 1 loss with a 36-27 victory against the Washington Commanders in Week 2. That was the second-straight game where the Lions proved that their attack has made significant strides while their defense has been gashed. To be fair, second pick overall Aidan Hutchinson broke out with three sacks, but the Commanders still rolled up 396 yards just one week after the Eagles put up 452.

Fortunately for Lions' bettors, they put up 425 yards of their own against the Commanders and now face a Vikes team that can't stop the run.

The Lions have clearly improved from last season, so keep in mind that they edged the Vikes 29-27 at Ford Field last December and lost on a last-second field goal in Minnesota in October.

In addition, this Vikes' defense needs to get pressure from the edge with Za'Darius Smith and Danielle Hunter but won't have an easy time against Detroit's bookends of Decker and Sewell.

I expect the Lions to put up points on the board, but the Vikings should also have plenty of success on offense. Cousins always seems to implode in prime time but is typically very productive against below-average competition.

Dalvin Cook should be able to rumble against a soft Lions front, while Justin Jefferson will bounce back after getting locked down by Darius Slay last week. Even with Hutchinson, this is still a weak Lions stop-unit that ranks 30th in the league in defensive EPA/play and is allowing 32.5 points per game.

The Lions are 5-0 ATS in their last five games against a team with a winning record. Find more NFL betting trends for Lions vs. Vikings. 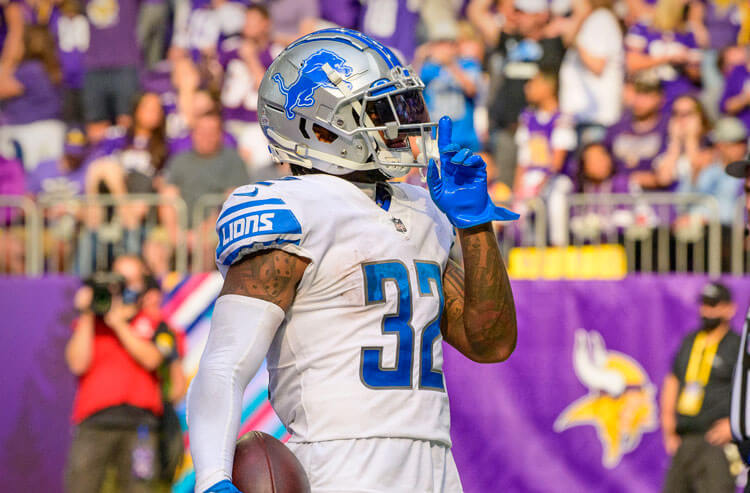 Lions vs Vikings Week 3 Picks and Predictions: Offenses Rule the Day
Provided by