Joe Burrow etched his name into Cincinnati sports lore in 2021, guiding his Bengals on a magical run to the Super Bowl. Burrow now has to try to repeat his heroics in '22 but ahead of this season, we're breaking down his record against all 31 teams.

From Greg Cook's brief but tantalizing career, to Carson Palmer's shredded knee and wasted prime, to Andy Dalton's mediocrity, the history of quarterbacks in Cincinnati has been at worst heartbreaking and at best, frustrating.

So, history seemed to be repeating itself when Ohio's Very Own, Joe Burrow, had his rapid rise to superstardom halted, and his rookie season ended, by a torn ACL. Instead, Burrow returned with aplomb in 2021, guiding the Bengals to their first postseason berth since 2015 and winning Comeback Player of the Year.

With fewer than 30 starts to his name, Burrow's career is only just beginning. Before the former Heisman winner sets out on his encore to '21, we're taking a look at his team-by-team record.

Burrow vs the Baltimore Ravens

The story of the AFC North for the better part of this century has been the Steelers and Ravens playing the part of the big brothers to the diminutive little brothers, the Bengals and Browns.

Burrow was introduced to this way of life early in his rookie year, when Cincinnati was swatted aside by Baltimore, 27-3. That was loss No. 4 in what would become a five-game losing skid for the Bengals against their divisional foe.

However, upon Burrow's return in 2021, he set about reversing the landscape of the AFC North. The Bengals made a statement in Week 7, going into Baltimore and leaving with a 41-17 win — aided by Burrow's 416 yards and three scores.

The rematch, in Week 16, followed a similar script, with Cincinnati hanging another 41 points on the Baltimore Ravens in a 41-21 win. Burrow outdid himself that day with the best game of his young career, going 37 for 46 for 525 yards and four touchdowns.

That’s the 3rd most passing yards in a game in NFL history.

Burrow vs the Pittsburgh Steelers

Pittsburgh's dominance over Cincinnati has been more extreme and much more long-lasting. The Bengals are just 38-68 all-time against the Steelers, and Burrow's first meeting with them — a 36-10 loss — was Cincinnati's 11th straight at the hands of Pittsburgh.

The 2021 season was, as it was against the Ravens, a different story for Burrow's Bengals. The then-sophomore passer got his first win over Pittsburgh in Week 3, in a straightforward 24-10 victory. He then took his newfound love of smackdowns into a Week 12 clash in Cincinnati, putting up another 40 points in a 41-10 Bengals win.

A combined 4-3 record against the Ravens and Steelers is out of the norm for a Bengals quarterback, but as Burrow has quickly proven, he's not the norm under center in Cincinnati. Burrow will not be bent by the whims of the Football Gods, who are all too often having fun at the expense of the Bengals faithful.

It's a new dawn on the Ohio River.

Burrow vs the Kansas City Chiefs

You simply can't tell the young story of Joe Burrow without mentioning the Kansas City Chiefs, who played the antagonist in two of Burrow's heroic stories.

Just a week after his 525-yard showing against Baltimore, Burrow and the Bengals hosted the Chiefs for the first meeting between Burrow and Patrick Mahomes — but it was Kansas City's defense doing the heavy lifting for the team at that point, operating as one of the NFL's best units.

Burrow showed no regard for the Chiefs' relentless defense, trading punches with Mahomes en route to 446 yards and four scores on 30-of-39 passing. A six-minute, 15-play, 74-yard drive — with the AFC North title on the line — capped off the phenomenal showing, as Burrow set up rookie kicker Evan McPherson for a game-winning field goal as time expired.

That wasn't all for Kansas City and Cincinnati, as less than a month later, the two would meet in the AFC Championship game. While not the offensive display from the regular season, Burrow and the Bengals did enough to come back from a 21-10 half-time deficit to win 27-24, with Burrow leading Cincinnati on a nine-play 42-yard drive to set up the game-winning field goal in overtime.

The AFC is not short on ascending talents at quarterback, but Burrow and Mahomes look set for a decade of epic battles like the pair we were treated to in 2021.

Burrow vs the Los Angeles Rams

The high of Burrow's young career came in Super Bowl LVI. Burrow and the Bengals' win over the Chiefs sent them to the Super Bowl and into a date with the Los Angeles Rams at L.A.'s SoFi Stadium.

While L.A. quarterback Matthew Stafford would guide the Rams on a game-winning drive late on, Burrow acquitted himself well in the biggest game of his career.

Burrow's final line — 22-33 for 263 yards and a TD — was fairly pedestrian by the lofty standards he set down the stretch, but the Rams' pass rush deserves a lot of the credit as they sacked him seven times and hit him 11 more. Yet, Burrow had the Bengals in a position to win, with Cincinnati leading 20-16 into the fourth quarter.

Despite the Rams residing in the NFC, Burrow won't have to wait long to try and get a little revenge. The NFC West and AFC North are set to square off in 2023, with Burrow's Bengals and Stafford's Rams engaging in a rematch.

Burrow vs the Las Vegas Raiders

Though Burrow's only faced the Las Vegas Raiders twice in his young career, it's Vegas who helped launch Burrow's legend in Ohio.

While neither the score, a 26-19 Bengals win, nor Burrow's stat line — a modest 24-34, 244 yards, two TDs — in the Wild Card Round were spectacular, the significance of this victory was a spectacle unto itself.

In leading Cincinnati past Vegas, Burrow delivered the franchise its first playoff win in 31 years, ending one of the longest droughts in sports.

The Bengals were on a 31 year playoff win and 32 year AFC championship appearance drought. Then, Joe Burrow showed up. pic.twitter.com/5gSVLpRPfb

Proving just how different he is to the passers of Bengals past, Burrow didn't settle with just the one postseason victory, going on the road to knockoff the No. 1 seed Titans, then the vaunted Chiefs en route to the Super Bowl.

Burrow and the Bengals' magical 2021 season didn't get its storybook ending, but as the charismatic star has proven, he'll only come back better than before. 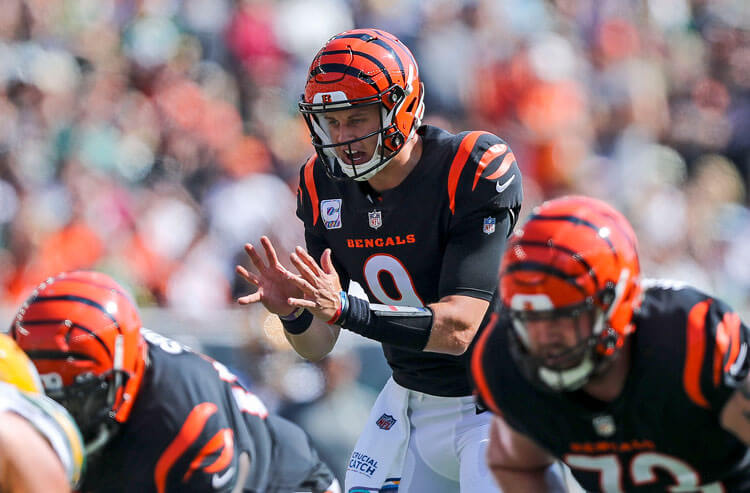 Joe Burrow's Record Against Every NFL Team
Provided by