Facing a very tired, very injured, and overall very bad pass defense on a short week is a great spot for Joe Burrow. Add in little to no support from his running game, and it's clear why our NFL player prop spotlight is on Burrow to blow up on TNF.

Good luck to those trying to make Dolphins vs. Bengals picks for this week's Thursday Night Football matchup, as handicapping the Week 4 odds is nearly impossible with the uncertainty around Tua Tagovailoa's health.

Good thing I'm not giving picks for the entire game then, amirite? This space is reserved for looking at just one specific player, and my spotlight will be on Joe Burrow props, a.k.a the quarterback we know for sure is playing.

Armed with a trio of dangerous receivers, absolutely zero running game, and facing a Dolphins defense that provides an advantageous matchup, I break down my three favorite free NFL picks — revolving around Joe Brrr being a cold-blooded killa' on Thursday night.

The conditions are perfect for Burrow to have a big game on Thursday. Heck, he doesn't even need a "big" game — he just needs to go Over a passing yards total that he's topped twice this season and nine of his final 13 regular-season games in 2021.

What makes it such an enticing bet for Thursday? Well, he's going to have to pass a lot and do so against an exploitable Miami pass defense.

First, his run game support (or lack thereof): the Cincinnati Bengals are ninth in ESPN Analytics' run-block win rate, and have the seventh-most rushing attempts in the NFL this season... but are 20th in rushing yards, 25th in Pro Football Focus' rushing grade, 31st in yards per carry, and have -8.13 Expected Points Added from the run game.

The run game struggles will only further be exaggerated against a Miami Dolphins' defense that is fourth in run-stop win rate and has given up the third-fewest rushing yards to running back (48.3 yards per game) through three weeks.

But, as the Miami defense taketh away... the Miami defense giveth as well. The Fins have been shredded in the secondary (literally and figuratively) this season, sitting 29th in PFF's pass coverage grade, 28th in pass defense DVOA (per Football Outsiders), and surrendering the second-most passing yards in the league — plus safety Brandon Jones, star cornerback Xavien Howard, and nickelback Kader Kohou are all listed as questionable on the injury report, while Byron Jones remains on PUP.

Miami's stop unit was also on the field for more than 90 plays and 42 minutes, with temperatures nearly at triple digits, against Buffalo in Week 3 and has just three days to recover. This defense will surely be gassed — especially come the latter parts of the game — which only will make Burrow's life easier as tired legs equal less pressure and more open receivers.

Fine, a tired defense is also ripe to get gashed by the running game, but Cincy has been so bad that I don't see it suddenly rushing for 150+ yards.

This pick looks better if Tua Tagovailoa plays for Miami, as the Bengals will have to push the offense more, but even if he doesn't suit up, I still think Zac Taylor will lean heavily on Burrow to move the ball up and down the field Thursday.

Last season, Burrow had the fifth-most deep passing attempts in the NFL last year, completing at just over a 41% clip. Through three games in 2022, he's just 2 of 11 on deep throws — but he's got a good matchup to complete a big play Thursday and I love the Over on his longest completion prop.

Remember that whole 'the Dolphins defense played a bazillion snaps on Sunday and will be dog tired' thing mentioned above?

Yeah, that's not going to help their chances at avoiding giving up a big play.

Neither is having three of your five best defensive backs banged up and another unavailable.

Neither is already being 28th in defensive dropback EPA and giving up eight pass plays of 25+ yards (two over 40 yards) in three games.

The Dolphins' secondary has been burned repeatedly this season and has yet to face a passing attack with as many quality weapons as the Cincinnati trio of Ja'Marr Chase, Tee Higgins, and Tyler Boyd.

Containing these three is difficult enough as is... but with its top cover corner potentially out — or at best, less than 100% with a groin injury — Miami will be looking at some serious mismatches down the field.

Burrow likes to throw it deep, and against a secondary in shambles, I think he connects on at least one long play in primetime.

So far, I've gone all-in on Burrow picking apart the Fins with his arm, but he can also break off a run here and there.

Burrow has 73 rushing yards through three games, good for second on the team, even ahead of No. 2 RB Samaje Perine.

Now, this is entirely from improvisation after the pocket breaks down (he has 77 rush yards on nine scrambles, with a total of -4 yards on six designed runs), but considering the Bengals are just 25th in pass block win rate — and Miami blitzes 25.5% of the time — a pass-heavy game from Burrow will likely include having to make a play with his legs once or twice.

Now, Miami's defensive numbers are a little skewed in terms of giving up QB rushing yards, as it allowed a 79-yard run by Lamar Jackson in Week 2, but he still had 40 yards on eight other rushing attempts that game, while Josh Allen had eight rushes for 47 yards last week.

Those are two of the premier running QBs in the league but Burrow is looking at a rushing total of just 11.5 yards this week, a number he's topped twice this season already — both in yardage totals and individual runs. 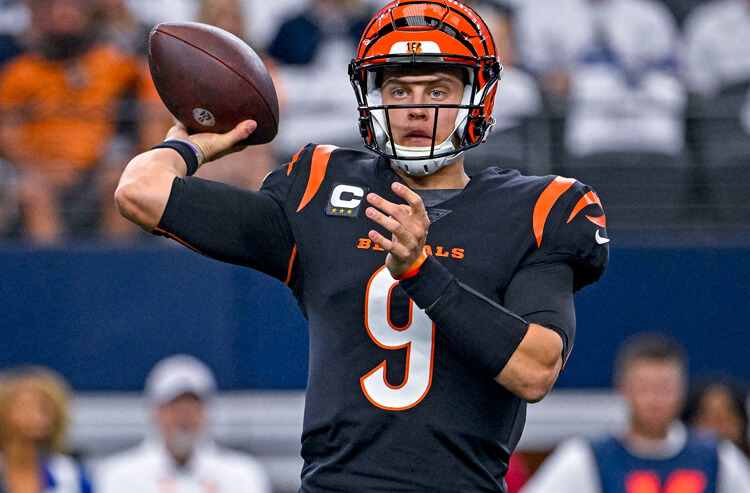