Life won't be easy for Jacksonville this week as it heads to Arrowhead. The Chiefs are flying already and have a new toy in Kadarius Toney — our NFL betting picks expect an increased role for the wideout vs. the Jaguars.

The Chiefs come into this game full of confidence and playing at a level that makes them look like certainties for the AFC Championship game. Meanwhile, the Jaguars have struggled to a 3-6 record, showing brilliance at times but also plenty of things that need to be worked on.

This should be a routine win for the Chiefs but it rarely works out like that in the NFL. Can the Jaguars pull off an upset? Don’t miss our NFL picks and predictions for the Jacksonville Jaguars vs. Kansas City Chiefs.

Jaguars vs Chiefs picks and predictions

Both teams made moves at the trade deadline, but the Jaguars’ acquisition of Calvin Ridley is one for the future whereas the Chiefs grabbing Kadarius Toney is a move for now.

Toney was drafted just last year by the New York Giants, who took him 20th overall. The former Florida man had been missing most of this season, under the guise of an injury, which miraculously healed when he was traded.

We didn’t see a huge amount from Toney in New York but when he was on the field, he was absolutely electric. His 41 receptions for the Giants got him 420 yards, but the most impressive part of his play was his shifty change of direction and ankle-breaking agility.

He only had two targets in his debut for the Chiefs last week but he hauled them both in for 12 yards, including a brilliantly run route for a first down. It’s going to take some time to get Toney up to speed with this offense but since the departure of Tyreek Hill, they’re missing a true game-breaking wideout.

It’s too soon to say Toney can be the new Hill, and they don’t have identical skill sets, but they do share incredible agility. With Andy Reid scheming up plays, there’s no doubt that Toney could become a key part of this offense in no time.

The WR room is sparse at Arrowhead. JuJu Smith-Schuster can move the chains but he’s not elite, Mecole Hardman has shown that Hill comparisons were overblown, Marquez Valdes-Scantling has been a let-down, and rookie Skyy Moore looks incredibly raw. So, Toney has a real opportunity.

The Jaguars have given up an average of 152 yards per game to wide receivers and with Toney’s receiving yards line sitting at just 16.5 yards, it feels very likely that Toney can go Over that.

There’s a big gap in quality between these teams. While the Bills may still be Super Bowl favorites, it’s the Chiefs who have the best offense according to DVOA, with the Jaguars down in 11th.

Defensively, there isn’t too much between these teams, with DVOA ranking the Jaguars 22nd and Chiefs 23rd. The Jaguars’ defense has allowed 343.4 scrimmage yards per game, with the Chiefs slightly worse at 351.5.

It really does come down to the play-calling and ability on offense when looking at these two teams, and I’d lean toward the Chiefs covering the spread. The Jaguars are at 1-7 ATS in their past eight games on the road and 1-5 ATS in their past six against teams with a winning record.

The total has crept up from 50.5 points upon opening to 51.5. It’s a tricky one to call, especially given the inconsistency we’ve seen from the Jaguars this year. While the Chiefs can be almost guaranteed to score multiple touchdowns, we can’t say the same about the road team.

This season, we’ve seen the Jags put up 38 points against the Chargers and two weeks later just six against the Texans. There’s no consistency.

This is one market I’d avoid for this game but if forced I’d probably lean to the Under.

The Jaguars are 1-5 ATS in their last 6 meetings. Find more NFL betting trends for Jaguars vs. Chiefs. 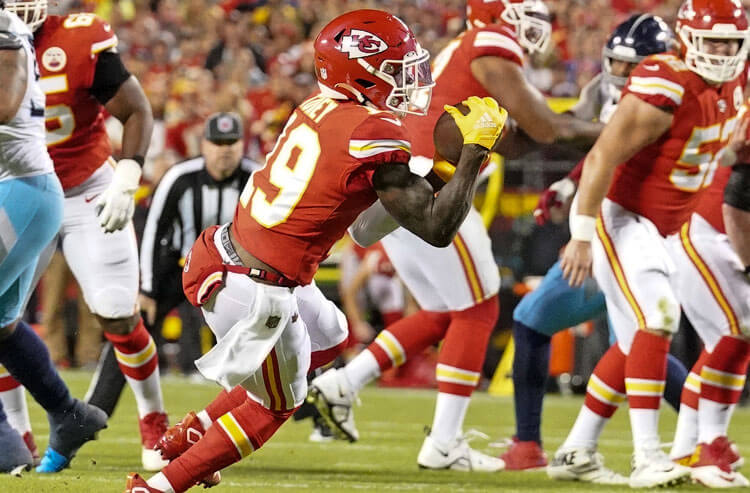