The Falcons leave the cozy confines of a dome in Week 17, heading to the harsh conditions of Buffalo to face a loaded Bills team. Can an awful Atlanta team manage to cover the NFL betting spread against a contender? Read on for our picks and predictions.

The Buffalo Bills are in the driver’s seat for the AFC East after a convincing 33-21 win over New England last week. Now, Josh Allen and the Bills will look to run the table starting with the Atlanta Falcons, who enter Week 17 as 14.5-point underdogs in a game that will see mid-30 temperature, wind, and possibly snow.

Can the Bills ride the momentum from last week’s win and continue to dominate bad teams? Can Atlanta improve on its 1-5 ATS record against teams with winning records?

Find out in our free NFL picks and predictions for Falcons vs. Bills.

This line was Buffalo -13.5 on the look-ahead but reopened at -14 and has since hit -14.5. The total sits at 44.5 after opening at 44. This will be the sixth game this season where Buffalo is a double-digit favorite and the Bills are 3-1-1 ATS in those games.

If you're signing up for a new sportsbook for NFL Week 17, here are two of the best welcome bonuses available:

The Bills are 7-1-1 ATS vs. a team with a losing record. Find more NFL betting trends for Falcons vs. Bills.

Falcons vs Bills picks and predictions

Last week, the Bills went into New England and laid the hammer down on Bill Belichick and the Patriots finishing with a 33-21 victory and outgaining New England by 2.5 yards per pass. This puts them in lead in the AFC East and with the Falcons and Jets on deck, the Bills should finish atop the division.

They’ll get to build their confidence Sunday against the Falcons, who failed to cover in Detroit last week and were lucky to come away with a win versus a team that featured Tim Boyle under center. Detroit finished with more yards but went 0 for 4 in the red zone, which was the difference in the game. If Detroit wins that game, we think this number opens at -14.5 and not -14.

The Falcons are 7-8 on the season and have a 2% chance to make the playoffs but this has been one of the worst teams in football, as their -122 point differential is only better than the Lions, Texans, Jaguars, and Jets. They rank 31st in rushing yards per game and will likely be passing a ton against a Buffalo defense that has more takeaways than 29 other teams and had two versus the Patriots who are a decent team at protecting the ball. The Falcons are little more than generous and average 1.5 giveaways per game.

Outside of the loss to Jacksonville in Week 9, the Bills have taken care of inferior opponents this season and are 7-1-1 ATS versus teams with a losing record over their last nine games. They also covered as 14.5-point home favorites just two weeks ago versus a Carolina team that features a better overall defense than Buffalo's Week 17 opponent. Atlanta currently owns the No. 26 rush defense and No. 29 pass defense by success rate and faces Buffalo’s No. 2 passing offense that has more weapons than it knows what to do with.

Buffalo also has a big advantage facing an indoor team in the cold of Orchard Park in late December. Atlanta played indoors last week, at San Francisco in Week 15, at Carolina in Week 14, indoors in Week 13, and at Jacksonville in Week 12. In a season with not much to play for, Matt Ryan and the Falcons are lined up to lay a dud on the road in the cold against a Buffalo team that is over its mid-season slump.

There are a few -14s still out there but this would still be a play at -14.5 for us as this Atlanta team is no better than the Panthers who closed at +14.5 in Buffalo two weeks ago.

The Bills are sitting with a team total of 30.5 and a full game total of 44.5. Betting on this Over is expecting the Falcons to score possibly two touchdowns and after last week’s performance, we’re not tying any of our money to the Falcons.

In Week 16, indoors and facing the Lions’ No. 24 pass defense, Matt Ryan went 18 for 24 passing for 215 yards and a TD. The Falcons managed only 254 yards, finished 2 for 8 on third downs, and had the ball for just 22 minutes in the narrow victory. Expecting this offense to rack up yards through the air in the wind and versus the Bills’ No. 2 pass defense in EPA/play is asking a lot.

Ryan has completed more than 19 passes just once in his last seven games, which is saying a lot as his team has zero running game. He has also thrown for just four TDs over that stretch with his team averaging just 13 points per game. Somehow, the Falcons have managed seven wins despite averaging just two TDs per game on the season. Atlanta sits 25th in EPA/play and faces the No. 2 defense in EPA/play in playing conditions that favor the Buffalo defense substantially.

Atlanta will be an easy team to stop, as it owns the No. 31 rush offense in success rate and will likely be one-dimensional yet again after rushing the ball just 18 times last week versus the Lions. The Bills’ defense ranks second in the league in pressure percentage, behind only the Dolphins, and could make life difficult for the 36-year-old indoor QB on Sunday.

The game total of 44.5 is a tough call for us and likely a pass. However, hitting the Under on the Falcons’ team total of 14.5 (-120) is a better pivot. Buffalo has everything to play for and has held its opponents to an average of 10.2 points per game in the five games it's been a double-digit favorite.

Buffalo has shown that it can cover these massive spreads and should roll over an overachieving Atlanta team that is 0-4 ATS versus teams with a winning record in its last four. This is the same Falcons team that lost 25-0 at home to the Patriots back in Week 11.

With the emergence of Isaiah McKenzie and the possible addition of Gabriel Davis, this is becoming one of the most loaded pass-catching teams in football despite the lack of big names, Stefon Diggs excluded. Opposing quarterbacks have feasted on this Atlanta defense all season and with nothing much to play for in temperatures likely in the mid-30s, we’d be surprised if the Falcons played competitively for 60 minutes.

Buffalo will want to roll into the playoffs on a high note and running up the score against a bad Falcons team is a great start. 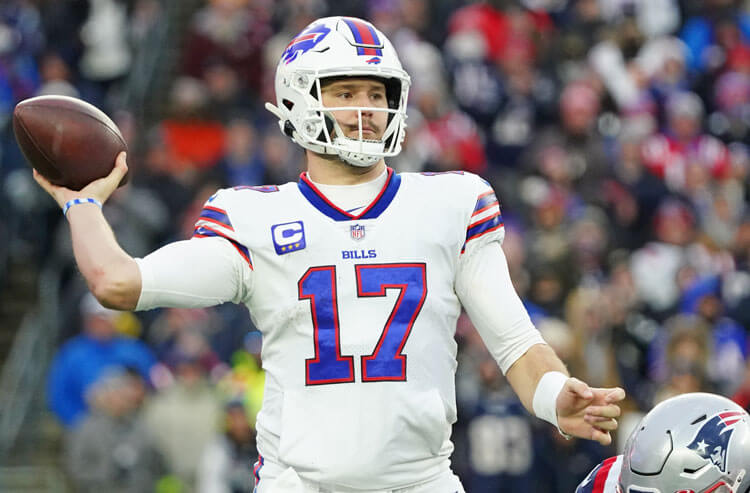