Dolphins vs Raiders Week 3 Picks and Predictions: Miami D Steps Up Without Tua

Miami got blanked by Buffalo in Week 2 while Las Vegas, one of the big surprise teams to start the season, is off to a 2-0 start. But don't overlook the Fins, which is exactly what we think the Raiders might do. Read more in our Dolphins vs. Raiders picks.

The Las Vegas Raiders, one of the biggest surprises of the 2021 season, take a 2-0 record into a Week 3 clash at home against the Miami Dolphins.

The Raiders have wins over Baltimore and Pittsburgh, putting up almost 800 total yards passing against two of the top defenses in the league. Enter the Dolphins, who are not only licking their wounds after a 35-0 shutout loss versus Buffalo in Week 2 but will play without QB Tua Tagovailoa. That has Miami getting 4.5 points on the road in Sin City.

Here are our free NFL picks and predictions for Dolphins at Raiders on September 26.

This spread opened Las Vegas -5 but upon news that Raiders QB Derek Carr was nursing an ankle injury, the spread dipped to -4. But once Tagovailoa (ribs) was ruled out, the line moved up half a point to -4.5. The total opened at 45.5 points and has remained steady at the number at most books. Use the live odds widget above to track any future line movements right up until kickoff and be sure to check out the full NFL odds before placing your bets.

The game will be played in the Raiders' indoor stadium, so the weather, which is expected to be 95 degrees Fahrenheit, won't be a factor. Be sure to monitor the gametime conditions with our NFL weather info.

The Dolphins are 6-1 ATS in their last seven games as underdogs. Find more NFL betting trends for Dolphins vs. Raiders.

Convention says the Raiders should continue to cruise in Week 3, coming back home with a 2-0 record and facing a team staggering after failing to score a single point in Week 2. Well, the Dolphins are not your conventional team.

Miami’s defense thrives on chaos. It led the league with 29 takeaways in 2020 and while that stat is tough to bottle, the Dolphins have continued to produce game-changing plays with four takeaways in the first two contests of 2021.

Even in last week’s home loss to Buffalo, the Fins forced two fumbles — recovered one — and picked off Josh Allen, holding the Bills’ potent air attack to 171 yards on 17-for-33 passing. Heading into Week 3, Miami ranks 11th in Defensive DVOA at Football Outsiders, including seventh versus the pass.

Carr’s efforts to open 2021 are impressive but regression is bound to happen, especially if he’s impacted by that ankle injury suffered in Week 2. The Dolphins have blitzed on 31 of 72 dropbacks (43%), lead the league in QB knockdowns (15), and will look to attack a suspect Vegas offensive line that has allowed five sacks (and was let off the hook with T.J. Watt leaving Week 2 early), making Carr move around on that tender ankle.

As for the quarterback situation for the Fins, Tagovailoa is a dynamic player but is still very much wet behind the ears. The perceived dip in production between Tua and backup Jacoby Brissett is not as big as you would think — in terms of worth to the spread — and Brissett has plenty of experience under center.

Mix in a sticky situational sandwich spot, as we covered in our Week 3 Spot Bets, for the Silver and Black — letdown from big road win in Pittsburgh and lookahead to huge Monday matchup with the Chargers in Week 4 — and we’re taking the points with the road team this Sunday.

The spread is currently Miami +4.5 but with sportsbooks reporting more than 90 percent of ticket count on the Raiders and almost 80 percent of the money on Vegas, this line will likely climb to +5 or higher. So, if you’re picking the Dolphins, wait it out and see how many points you can grab before kickoff.

Despite all those passing yards, the Raiders have scored a total of 53 points in regulation through two weeks, averaging 8.8 yards per pass but only 0.41 points per play.

Las Vegas has been able to move the chains but stalls out in the red zone, scoring four touchdowns on nine tries inside their foes’ 20-yard line, and ranking 28th in Red Zone Offense DVOA. Miami has leaked TDs on just three of their opponents’ eight red-zone tries and sits 11th in Red-Zone Defense DVOA.

As for the Fins attack, a shuffle to the offensive line is being made in order to give Brissett extra time in the pocket. Buffalo recorded four sacks on the backup QB in Week 2, but Miami was forced into a one-dimensional playbook after going down 14-0 in the first quarter, which allowed Buffalo to tee off with little fear of the run.

Expect plenty of short quick passes from the Fins in an attempt to kick start Brissett, who has a reputation for hanging on to the ball too long. The Dolphins have capable playmakers that can pick up yards after the catch, such as RB Myles Gaskin and rookie speedster Jaylen Waddle. Also expect more from TE Mike Gesicki, who will be Brissett’s safety blanket in what will be a conservative attack.

Miami, which has run one of the more up-tempo offenses through two weeks, knows it can’t win a shootout against the Raiders, so expect a slower pace in an effort to ice Carr and the Vegas offense.

I’m banking on this game being a little wild and even ugly at times, which means tossing down action on a defensive or special teams touchdown being scored.

Of course, the window is open for a pick-six with a backup quarterback under center for the Fins, who already have four giveaways to start the new season. However, Miami’s been able to pull points from all over the place in recent years. The Dolphins scored two TDs via fumble recoveries and one on a punt return last season.

Vegas finished with 26 giveaways in 2020, 16 of them on fumbles. They have just one interception from Carr so far, but there will be plenty of passes testing this Miami secondary, led by all-world CB Xavien Howard. 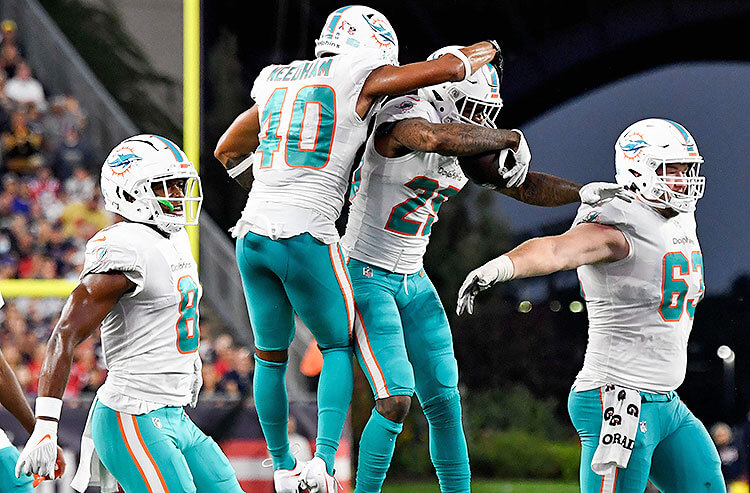 Dolphins vs Raiders Week 3 Picks and Predictions: Miami D Steps Up Without Tua
Provided by